A hotel or campground right for everyone.

That does not even begin to address the rumors of further hotel expansion.   The Project 89 work at Fort Wilderness, likely for a new resort complex there.  (Addressed in the previous entry to this series).    And the EPCOT entrance hotel.

Accordingly, there is a lot of anticipated growth in the hotel and resort segment of Walt Disney World.  Once these additions, are complete, I believe there are just a couple of additional remodelings and expansions that should be undertaken to fully flesh out the resort.

Rather than discuss every resort and potential additions, I'm going to focus on the specific additions and changes that I would make.  Most resorts function well and just need periodic refreshing of the decor and interior design.  There's no need for me to discuss each of those instances.  Instead, I want to focus on larger construction needs and potential new resorts that should be added.

Magic Kingdom Resort Area:
Generally, the hotels of the Magic Kingdom resort area are the stalwarts of the Walt Disney World Resort.  The Grand Floridian, The Polynesian, The Contemporary.  There are just a couple of additions that I would propose to really cap off this area.

First, I would add a second tower to the Contemporary Resort area to balance the Bay Lake Tower addition.  This would take over the Garden Wing section and should be either a circular copy of the Bay Lake Tower or a new complimentary geometric shape.

Second, I would add a fourth resort to the Seven Seas Lagoon.  This hotel should be Fantasy themed.  Disney's Magic Kingdom Hotel.  This is to complete the theme.  The Grand Floridian reflects the past like Main Street, Liberty Square, and Frontierland.  The Polynesian represents adventure.  And the Contemporary looks to the future.  There is a need for a fantasy resort.

This hotel would be a great location for a royal table princess character dining meal and a third Bibbidi Bobbidi Boutique location.

The only question with the resort is where to put it.  There have been several plans for additional resorts along the Seven Seas Lagoon/Bay Lake.  Particularly the Venetian, the Persian, the Asian, and the Mediterranean in the old Venetian location.  The Asian location eventually became the Grand Floridan, but the Venetian/Mediterranean and Persian sites are still open.  Both locations have been deemed suitable for development (or at least marginally suitable), but evidence shows the Venetian/Mediterranean plot may be more expensive than desired due to the swampy condition of the land.

I would propose an alternate location for this fantasy resort.  The land north of the Grand Floridian also shows to be suitable (or at least marginally suitable) for development.  I would look to add the fantasy resort here.  This would keep it on the monorail line, would allow for a greater possible expansion plot, and would help continue a sidewalk/jogging path all around the Seven Seas Lagoon.  This would leave the Venetian/Mediterranean and Persian plots available for further development.

In those previously identified locations, I would actually propose alternate uses.  The Persian plot would make a good second location for another 360 immersive hotel like the upcoming Star Wars hotel.  It is a good isolated location that could be more tightly managed to keep the entire experience in the hotel immersed in the particular story to be told.  Good immersive themes for this hotel would be a Haunted Mansion resort or even an additional immersive princess/royalty experience (Renaissance on steroids with a Disney flair).

If the Venetian/Mediterranean plot can be developed, I think it would be much better served as a mixed use facility than strictly a hotel resort complex.  Something like the Boardwalk or Disney Springs lite.  Disney Center Port/Pier.  Shopping and dining on the first floor, hotel rooms on the second and third.  An option to relieve the crowds at Disney Springs and also to allow guests to come out of the Magic Kingdom and into one of the restaurants there.  Ticket and Transportation parking would be sufficient.  Arguably, this could be a part of the revitalization of Ticket and Transportation, bringing it out of the dated 90s look and into an integral part of this shopping and dining district.

I feel these would be a good addition.  What I would add is the previously discussed narrow gauge train connecting the Wilderness Lodge and Fort Wilderness.  This has been long proposed to connect the two resorts, as well as to serve as a guide through the passage of time between the two settings.

I would dub this train the Wilderness Express and would seek to expand on the property in between these two locations.  There had been plans for a Wilderness Junction/Buffalo Junction Hotel in the middle.  This would be a great location for a more boutique hotel or even for another immersive hotel, themed to a wild west town.  Similar to the Hotel Cheyenne at Disneyland Paris.

EPCOT Area:
EPCOT has a proposed new hotel for the entrance to the park.  Rumor has it that the hotel could completely envelop the entrance, so that you would pass under the hotel to enter the park, or it could flank the entrances. Another possibility is that it would be located in the current bus drop off area.

I'm partial to the hotel spanning the entrance.  I like how this has been done at other Disneyland resorts (Paris and Tokyo) and feel that with the appropriate design, the hotel could complement the view to Spaceship Earth very well.  This would require an accommodation for the monorail, but that could only serve to increase the hotel's popularity.  I can envision the hotel looking a lot like the design for the new Disneyland hotel.   For simplicity's sake, I would call this the EPCOT Hotel, especially given the proximity to the entrance.

The Yacht & Beach Club and Swan and Dolphin hotels are all well developed as is.  The Boardwalk Hotel is as well, though I feel there are additions that should be made to the actual boardwalk itself.

The Boardwalk needs more things to do. For a boardwalk, it is really uneventful. There are seven restaurants, one dueling piano bar, and a dance club.  The latter two primarily become cast member hangouts.  I would propose to add two attractions to give the boardwalk like.  A carousel in the garden behind the main entrance.  (It's a shame that a resort that has so much carousel theme does not actually have a carousel.)   And a Ferris wheel.  The Ferris wheel does not need to be the biggest or oversized like the Pixar Pal-Around at Disney California Adventure. This can be something a little closer to traveling fair size.  Especially as it will be a pay to use ride, with a necessarily lower capacity and likely lower demand.  I think these two attractions would go along way to giving a little vitality to the area, particularly at night.  The midway could be moved further around the boardwalk, opposite the Ferris wheel.  If desired, another carnival attraction, like the swings, could be added on this side.

This is also a good place to talk about the upcoming gondolas, as the end result is connecting a lot of resorts to EPCOT and Disney Hollywood Studios.  The current plan will connect the Art of Animation, Pop Century, Caribbean Beach, and Riviera resorts to both parks.

There are a few options for the location.  I've indicated them on the map below.

I lean towards options one or two as they would help provide a bridge to a Hollywood Studios area with Caribbean Beach, Pop Century, and Art of Animation (the latter two would tie especially well with Disney Hollywood Studios).  Either location would work.  Ideally, there would be a park specific shuttle, perhaps like a stretch limo, to give guests of the hotel direct access to the park.

Disney Animal Kingdom Area:
The Animal Kingdom lodge and villas are beautiful resorts.  They may be two of the most beautiful resorts in all of Disney property.  Their only downside is their distance from other locations.  To keep the grounds for the animals on the savanna, their is a needed distance from everything else, which comes with the price of seclusion.  It is definitely worth the stay, but requires a car for ease of access (I would never tell anyone to rely solely on bus transportation here and the cost of uber or the Minnie Vans can add up quick).

One thing that could go a long way in easing the disconnected feel would be a transportation system connecting the lodge to the Animal Kingdom park.  Here, I would go with a train, like proposed Fort Wilderness and the Wilderness Lodge.  The Wildlife or Wildebeest Express. I can envision two different paths for the train.  One connecting you to the main entrance.  This would likely also require the reworking of the bus pick-up and drop off locations.  The second would be to connect to the Africa section of the park.  This in many ways makes the most sense to me.  It creates a unique perk for the resort and thematically ties the resort to the specific entrance.  This would require a security checkpoint and ticket gate at the lodge, but Disney has a history of this kind of transportation (the Disneyland monorail).


Disney Springs Area:
The Disney Springs hotels all work and do not have a lot of room for expansion.  Port Orleans Riverside and French Quarter, Old Key West, and Saratoga Springs all offer different themes, tied together by the water.  All connected to Disney Springs by the boat transportation system, they each serve their purpose well.

As discussed in the Disney Springs post, the only thing I could add that I feel would make particularly the Saratoga Springs resort better utilized, is a night time entertainment show on Lake Buena Vista for Disney Springs.  Ideally the particular show would be visible from both sides of the lake.   My favorite option is still updating and moving the Electric Water Pageant to these waters.

The two could be better coordinated by creating a direct path from these resorts to the Complex.  I've envisioned a new path from the center of the All-Star resorts to the Complex.  I've included a new stadium pitched in the Olympics post with new parking, which could help serve as a new entrance complex.  I can see either dedicated mini-buses or vans running this route.  "Team shuttles".

Further, within the All-Star Complex,  I would add large capacity golf carts for intra-Resort traffic.  Like the kind that are used in Studio tours (all-star movies) or for sporting events (all-star sports). 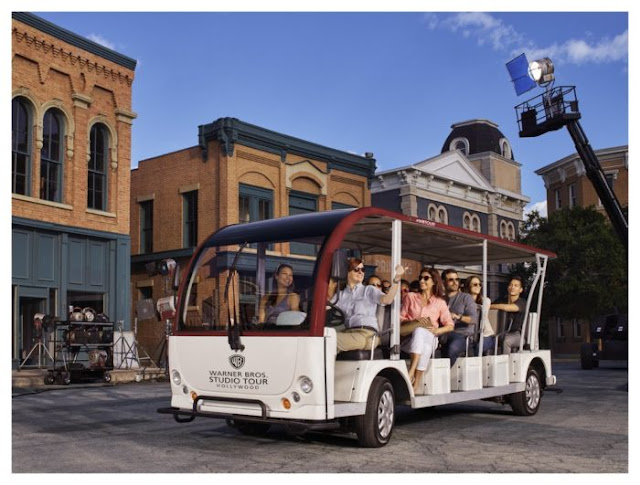 We've used these at the Warner Bros. Studio Tour and they would work great for getting around between these three properties.  Tying them together to feel like a greater whole.

With this, I think the Disney resorts are well situated for the years to come. And in light of all the additional hotels, motels, and non-Disney resorts just on the edge of property, there will be no shortage of rooms in the future for every price point.

Next time, general thoughts about the future of the Walt Disney Resort including thoughts on park number five.  Thanks, as always, for reading.
Posted by Mitch at 6:00 AM