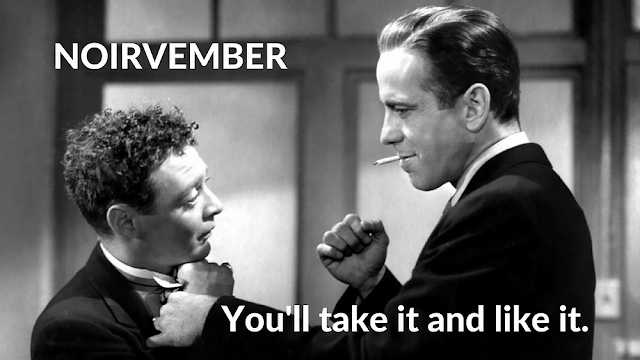 In November, our house celebrates Noirvember, a celebration of the greatest film genre, film noir.  Film noir refers to the stylish Hollywood crime dramas, particularly those that emphasize cynical attitudes and motivations.  It's the genre that provides us the smooth talking detectives, the hard as nails femme fatales that get them in trouble, and the criminals we love to hate.
It's my favorite genre of film and of literature.  I've spent the last couple of years reading through the works of Raymond Chandler, Dashiell Hammett, and James M. Cain.  I've poured over the film careers of Humphrey Bogart, Robert Mitchum, Dick Powell, and Richard Widmark.
To me, film noir is best served in black and white, as only that setting can provide the dark enough shadows to make it so perfectly captured.  This puts the best films in the 1940s and 1950s, which unsurprisingly, is the era I have logged the most film viewings in my Letterbox app.
This year, we've seen quite a few film noir new discoveries, some of which have quickly jumped to the top of my favorites list.   We have a few more to go, so I reserve the right to update this list, but I've included a few of my favorites below in case anyone needs any recommendations.  The first four films on this list are also on my top 10 favorite films of all time.
And a bonus recommendation
One day, I will get to go to Noir City, the annual noir film festival.  Until then, I'll settle for Noir Alley on TCM and our Noirvember celebration.  Lost in the shadows, and enjoying every minute of it.
Posted by Mitch at 4:55 PM