There's a disconnect at a societal level that is currently hindering our ability to have a conversation on one of the most important topics that is facing our nation.  We see it in the #metoo and #timesup movements, we're seeing it in the Kavanaugh confirmation hearings and investigation, and we've seen it in connection with the 2016 presidential election.  A conflict centering on when we should presume the truth of a sexual assault allegation, particularly focusing on the concept of "false allegations."

"False allegations", of course, referring to the idea that the person making the allegation is completely fabricating the allegation, usually for some presumptive malicious purpose.  And everyone plays out the worst possible scenarios in their head.  What if a woman has consensual sex one day, regrets it the next, and decides it was not consensual?  What if someone gets dumped and decides to accuse their ex of rape for revenge?  What if it's just for attention?  What if it's just completely fabricated to ruin someone's life?

And while we do have high-profile incidents that we can point to of false rape accusations like the 2014 Rolling Stone article, later retracted, regarding a brutal gang rape at the University of Virginia or the 2006 accusations against the Duke lacrosse team, the reality is that false accusations are exceedingly rare.

It is estimated that only 2% to 10% of all reports of rape are estimated to be false.  The Washington Post put it - reports of rape are murky, but rarely false.  Even this percentage range is very likely over-inclusive, as all jurisdictions have a distinct classification of false accusation, with some including a variety of case types including those where an accuser does not physically resist the suspect or sustain injuries under a generic heading of  "unfounded" or "unproven."  Due to these varying definitions, the actual percentage remains unknown.  Further, the data used to generate this statistic comes from reviews of data for investigations and prosecutions within the criminal justice system, not from an actual academic study.  The goal of the two is different, as the goal of a criminal investigation is to determine whether or not there is sufficient evidence to prosecute, not to determine if there is enough evidence to classify as "false" or "true."  Put another way, criminal investigations are looking to see if there is enough evidence to prosecute and win.  If a case cannot meet that bar, it doesn't matter whether the allegations are true or not.  It would still be "unproven."

To put this visually into perspective: 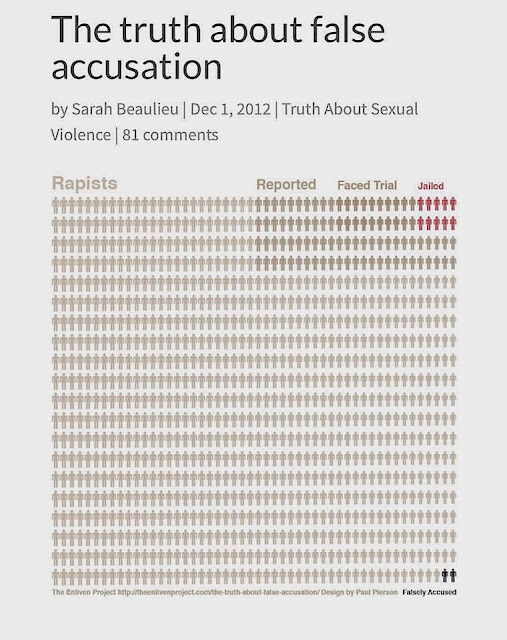 As you can see, we have a bigger problem than false accusations.

And yet, false accusations claim such a big place in our discussion of sexual violence.

Why is it we fear the potential damage to a man's reputation from false allegations more than the very likely sexual assault and ensuing trauma that a woman will face?

If we look further into the possibility of damage to a man's reputation, we also find that those fears are overblown.  Upon further investigation, we see that false rape accusations almost never have serious consequences.  First, it's exceedingly rare for a false rape allegation to end in prison time.  According to the National Registry of Exonerations, since 1989, in the US there are only 52 cases where men convicted of sexual assault were exonerated because it turned out they were falsely accused.  In that same period of time, 790 people were exonerated for murder.  Further, the British Home Office had a very detailed study conducted in the early 2000s on sexual assault reporting to the police.  Of the 216 complaints that were classified as false, just over half (126) got to the stage where an accuser launched a formal complaint.   Only 39 of those actually named a suspect.  Only 6 then led to an arrest and only 2 led to charges being brought before they were determined to be false.  What we see is that even in the rare case where someone is the subject of a false rape complaint, the greatest likelihood is that the charges will be dropped before he or anyone beyond the accuser and police ever learn of the allegations.

Sadly, the media plays into this heavily.  Incorrect assumptions about false rape allegations increase the likelihood that a person who reports rape will be blamed or disbelieved.  In Deviant Behavior, author Megan Sacks states that the media perpetuates rape myths when reporting sexual assaults, reporting the ones that are typically sensational and not corresponding to the reality of most cases.  An example would be reporting on rapes by a stranger, playing into that primal fear, when the reality is that most rapes are committed by someone known to the victim.  Laura Niemi, a postdoctoral psychology associate at Harvard has speculated that the mythologizing of rape can contribute to the idea that "no normal person" could rape, leading to people commonly having difficultly believing someone they know or like could be a rapist and contributing to the idea that the victim who reported the rape is at fault.

While rape victims have no unifying traits, false accusers on the other hand, do have a bit of a profile.

The most common kind of false accuser is a teenage girl who tells her parents she was raped to avoid getting in trouble, sometimes citing an unwanted pregnancy, but often having a trivial reason like "missed curfew."  Troubling is that these false accusations are often lodged by someone other than the alleged victim, like a parent.  Adult false accusers, almost invariably, have a previous history of bizarre fabrications or criminal fraud.  The Duke lacrosse accuser was this type of archetypal false accuser.

It's time to believe women who come forward with an allegation until there is reason shown to doubt their claims.   And to decry them as false only when we have ample evidence to do so.

As most of you know, I have both a son and a daughter.

I'm not worried about my son being falsely accused of rape.

I am much more concerned about my daughter being sexually assaulted and not believed.

Because that, sadly, is still much, much more likely.

Posted before, but it bears repeating:
For more information on False Accusations and the infographic used above, check out this website.