In 1944, MGM released a new motion picture entitled Gaslight, starring Charles Boyer, Ingrid Bergman, Joseph Cotten, and a very young Angela Lansbury debuting in a particularly wicked role.  The film was based on a 1938 play by Patrick Hamilton entitled Gas Light and was the subject of a previous British film in 1940. 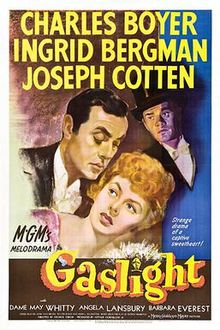 Now, it is impossible to talk about Gaslight and its relevance today without spoiling it, so please forgive me.  It is an incredible film and well worth the watch, so if you want to pause this and go watch the film and come back, I understand.

In the film, Bergman plays Paula, the niece of a world famous opera singer.  When Paula is 14, she witnesses her aunt's murder and interrupts the murder's attempt to steal a set of priceless jewels.  Paula is sent to Italy to study opera and grow.  Years later, she meets and marries Gregory Anton, played by Charles Boyer, and moves back into her aunt's old townhome at No. 9 Thornton Square with her new husband.  Here, things take a turn for the bizarre.  She seems to start forgetting things.  She hears footsteps in the attic, when no one else does.  The gas lights start to dim and flicker, though no one else notices (hence the name of the film).  Pictures disappear from the wall.  Because of this, Gregory keeps her isolated at home, implying he is doing so for her own good.

Paula eventually discovers that her husband is not what he seems.  He is really Sergis Bauer, her aunt's murderer, and he has been causing all of the bizarre activities and blaming them on Paula.  He removed the pictures.  He is dimming the gas lights.  He is searching the attic for the jewels he left behind all those years ago.

This underlying theme of the film has come to be referred to as gaslighting.  A form of psychological abuse in which the victim is gradually manipulated into doubting his or her own sanity.  It is a particular tool of narcissists, who use it to continually position themselves in the right and make their opponents doubt themselves.

It generally plays out over time, through increasing doubts in the victim’s thinking or perception.

I raise this discussion because this is the most recent form of danger we are seeing in this quarantine.  Large scale gaslighting regarding the Covid-19 pandemic.

It's in that insidious logic that says only X amount of people died, so Covid-19 can't have been all that serious, right?  Or that we didn't overrun the hospitals or use all the ventilators necessary, so the stay at home orders were unnecessary, right?

It's in the President rewriting his position on and his handling of the outbreak repeatedly.

It's behind the Fire Fauci movement.  In Trump saying the anti-stay at home protestors are practicing social distancing.

It's in the memes that overplay the comorbidity issues that we are seeing.  You know the ones.  The ones that are talking about a car crash victim showing up at the hospital and being treated as having died of Covid-19.

It's saying Covid-19 is just the flu.

Look, I'm not trying to say we have issues that need to be dealt with, questions that need answered about comorbidity, about true mortality rates, and about how to balance the disease and the economy on a global scale.

But if you are seeing news items or shared posts downplaying the severity of the virus and effectively saying our protective measures were not needed, you are being gaslighted.  Because we can measure the impact the disease has had in fatalities.  We can hear the first hand accounts of the severity of some of the symptoms.  We know it is more serious than the seasonal flu.

Arm yourself.  Gaslighting works because it makes you doubt what you know to be true.  To combat it, make sure you have verifiable, true information.  Get your news from sources that are known to be fair and true.  Stay up to date on statistics from first hand sources like the CDC and the WHO.

Please note, though, that facts and truth are not going to change someone who is engaging in gaslighting.  They will not make them back down.  You will not get that cathartic moment where the manipulator gets their comeuppance.  This is particularly true of narcissists, who will continually dig in their heels and find new ways to save face.

Being armed with the truth is more about staying sane yourself and recognizing the manipulation when it is occurring.

Stay safe out there.

"In the end the Party would announce that two and two made five, and you would have to believe it. It was inevitable that they should make that claim sooner or later: the logic of their position demanded it. Not merely the validity of experience, but the very existence of external reality, was tacitly denied by their philosophy. The heresy of heresies was common sense. And what was terrifying was not that they would kill you for thinking otherwise, but that they might be right. For, after all, how do we know that two and two make four? Or that the force of gravity works? Or that the past is unchangeable? If both the past and the external world exist only in the mind, and if the mind itself is controllable – what then?"