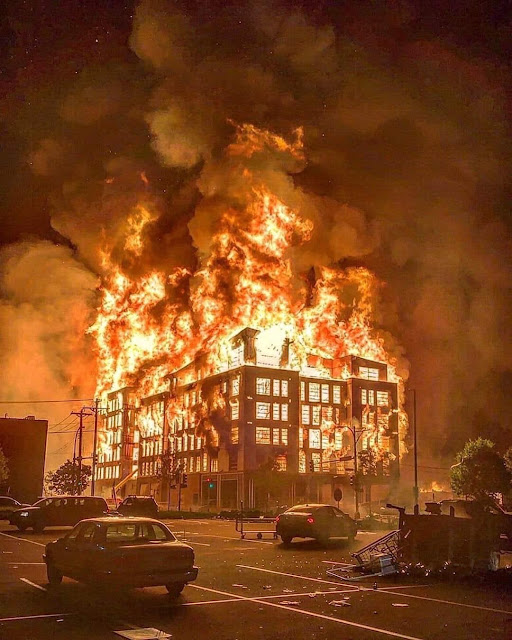 "I think America must see that riots do not develop out of thin air.  Certain conditions continue to exist in society which must be condemned as vigorously as we condemn riots.  But in the final analysis, a riot is the language of the unheard.  And what is it that America has failed to hear?  It has failed to hear that the plight of the Negro poor has worsened over the last few years.  It has failed to hear that the promises of freedom and justice have not been met.  And it has failed to hear that large segments of white society are more concerned about tranquility and the status quo than about justice, equality, and humanity.  And so in a real sense our nation's summers of riots are caused by our nation's winters of delay.  And as long as America postpones justice, we stand in the position of having these recurrences of violence and riots over and over again.  Social justice and progress are the absolute guarantors of riot prevention."
Dr. Martin Luther King, Jr., interview with Mike Wallace for CBS Reports, September 27, 1966

"Urban riots must now be recognized as durable social phenomena.  They may be deplorable, but they are there and should be understood.  Urban riots are a special form of violence.  They are not insurrections.  The rioters are not seeking to seize territory or to attain control of institutions.  They are mainly intended to shock the white community.  They are a distorted form of social protest.  The looting which is their principal feature serves many functions.  It enables the most enraged and deprived Negro to take hold of consumer goods with the ease the white man does by using his purse.  Often the Negro does not even want what he takes; he wants the experience of taking.  But most of all, alienated from society and knowing that this society cherishes property above people, he is shocking it by abusing property rights.  There are thus elements of emotional catharsis in the violent act.  This may explain why most cities in which riots have occurred have not had a repetition, even though the causative conditions remain.  It is also noteworthy that the amount of physical harm done to white people other than police is infinitesimal and in Detroit whites and Negroes looted in unity.

A profound judgment of today's riots was expressed by Victor Hugo a century ago.  He said, 'If a soul is left in darkness, sins will be committed.  The guilty one is not he who commits the sin, but he who causes the darkness."

The policymakers of the white society have caused the darkness; they create discrimination; they structured slums; and they perpetuate unemployment, ignorance and poverty.  It is incontestable and deplorable that Negroes have committed crimes; but they are derivative crimes.  They are born of the greater crimes of the white society.  When we ask Negroes to abide by the law, let us also demand that the white man abide by law in the ghettos.  Day-in and day-out he violates welfare laws to deprive the poor of their meager allotments; he flagrantly violates building codes and regulations; his police make a mockery of law; and he violates laws on equal employment and education and the provisions for civic services.  The slums are the handiwork of a vicious system of the white society; Negroes live in them but do not make them any more than a prisoner makes a prison.  Let us say boldly that if the violations of law by the white man in the slums over the years were calculated and compared with the law-breaking of a few days of riots, the hardened criminal would be the white man.  These are often difficult things to say but I have come to see more and more that it is necessary to utter the truth in order to deal with the great problems we face in our society."
Dr. Martin Luther King, Jr., to the American Psychology Associations annual convention, September 1967

This is why we cannot condemn the riots and the police abuse with the same voice, with the same volume and with the same fervor.  There is no question, the burning of Minneapolis is a tragedy.  It is deplorable.  But to decry it to the same level as the continued injustices that are being perpetrated is to prove that we still have not heard, nor have we learned the lesson.  We continue to allow the narrative to be coopted to focus on tranquility and the status quo.  We observe how many Americans are more concerned with order than with justice.

If we need any more proof that we still have not learned our lesson, look at our President.  His response, "when the looting starts, the shooting starts."  This is a direct quote from 1967.  From the Miami Police Chief Walter Headley at the GOP convention in December 1967.  A police chief who enacted some of the most racist police procedures at the time.  Shotguns, dogs, and "stop and frisk tactics."  His great quote, "We don't mind being accused of police brutality.  They haven't seen anything yet."

The phrase was also used by segregationist presidential candidate George Wallace in the 1968 presidential campaign. Wallace notoriously opposed desegregation and supported the policies of "Jim Crow" during the Civil Rights movement.  Martin Luther, Jr. called him, "perhaps the most dangerous racist in America today."

This is who our president quotes.

We still haven't heard them.

We still refuse to hear them.

Thankfully, Dr. King offered us the answer to how we get out of this, how we break the cycle, in the same speech toe he American Psychology Association.

"Thus, it may well be that our world is in dire need of a new organization.  The International Association of Advancement of Creative Maladjustment.  Men and women should be as maladjusted as the prophet Amos, who in the midst of the injustices of his day, could cry out in words that echo across the centuries, 'Let justice roll down like waters and righteousness like a mighty stream;' or as maladjusted as Abraham Lincoln, who in the midst of his vacillations finally came to see that this nation could not survive half slave and half free; or as maladjusted as Thomas Jefferson, who in the midst of an age amazingly adjusted to slavery, could scratch across the pages of history, words lifted to cosmic proportions, 'We hold these truths to be self evident, that all men are created equal.  That they are endowed by their creator with certain inalienable rights. And among these are life, liberty, and the pursuit of happiness.'  And through such creative maladjustment, we may be able to emerge from the bleak and desolate midnight of man's inhumanity to man, into the bright and glittering daybreak of freedom and justice.

If only we would listen this time.