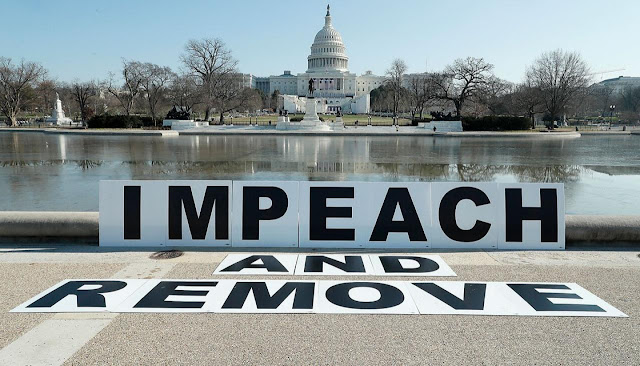 In a historic move, the House of Representatives has voted to impeach President Trump for a second time.  The vote was 232 for impeachment, 197 against, and largely along party lines.  Though there is a spot of hope - 10 Republican Representatives voted FOR impeachment, including high ranking leadership like Liz Cheney.

We remain in dark days in this country.  While this move is necessary, it is not something to be celebrated.  The fact that we are here reflected on how fragile our democracy is, how easily portions of us can be swayed by mis- and dis-information, and just how much damage has been done over the past five years.

We do have bright spots, though.  While once again, this may not result in any kind of action in the Senate, it reflects an attempt to provide consequences for the president's actions leading up to last Wednesday.  We also see Republicans willing to step up and be patriots.  To put country above party and to endanger their seat by refusing to capitulate to Trump and his cult like base.  Their willingness to vote for impeachment signals the beginning of the end for Trump in the Republican party.  Whether that is through a complete fracture or through a disassociation remains to be seen.

Either way, it will certainly be an interesting seven days ahead