Guilty, On All Three Counts 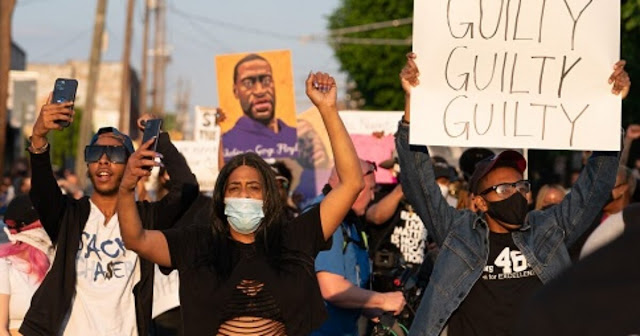 Chauvin's actions in placing his knee on the neck of a handcuffed and subdued Floyd for nine minutes and twenty-nine seconds reignited a national movement regarding race relations in the country and police brutality and accountability.  Thanks to a cell phone video taken by a brave teenage girl, the entire country witnessed in excruciating detail as Floyd pleaded for his life under Chavin's knee.

It's hard to ignore the symbolism of the event yesterday.  It's exceedingly rare that a case against a police officer for abuse of their authority would go trial in the first place.  It's even rarer that a jury would find against the police officer.  Juries have a tendency to defer to the police in the exercise of their authority, even in cases of clear excessive force.  That the jury would find Chauvin unanimously guilty on all three counts indicates a clear recognition of the need for police accountability.  Especially when this case was merely the lynchpin of a dialogue that has been increasing over the past several years, resulting from several similar cases, that just seem to keep piling up.

A history of cases.

The cases of Breonna Taylor and Ahmaud Arbery.

The case of Daunte Wright, stopped for an expired vehicle registration and shot by an officer who claimed they were reaching for their taser.

Even more disturbing, the case of Ma'khia Bryant, a 16 year old girl, shot by the very Columbus, Ohio police she called 9-1-1 for  assistance.  Shot on the same day the Chauvin verdict came out.

If you can't see the problem, you aren't paying attention.

There is a definitive difference in how police interact with the white and black populations.

There is a problem with the militarization of our police and the increased use of force by its officers.

There is a distinctive problem with a lack of police accountability.  Unions fight against any attempts at an increase in accountability.  Our justice system largely shields them from being held accountable by the public they serve.  Even their own internal efforts to police themselves are often inadequate.

We've embedded in our fiction that accountability for police action is inherently bad.

That has to change.  Hopefully this verdict is a symbol of that change.  There have been signs to that effect.  There are leaders that are determined to make real and lasting change in this area.

Because that is what this is about - accountability.

We have accountability because a seventeen year old girl was brave enough and strong enough to film the whole incident.

The question that should haunt you now, is what about the ones that were not filmed?