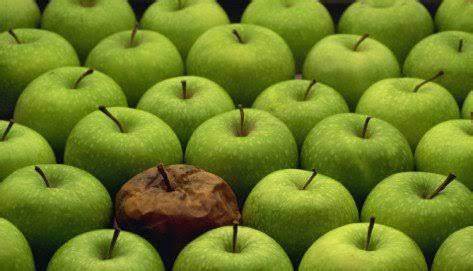 The sentiment is valid and comforting.  It is true, there is more good out there than there is bad.  It's comforting to remember, that as a whole, people try to do the right thing.  That there are more helpers than there are hurters.

We cling to it especially in times when we witness the actions of bad actors.  When we see the actions of people like Derek Chauvin, abusing their power and authority.

The problem, is that the sentiment is incomplete.  Like many aphorisms it has been shortened, to its detriment.  Take for example "curiosity killed the cat".  It's used to say that sticking your nose in where it is not welcomed can get you in trouble.  The full phrase had a rejoinder, though.  "Curiosity killed the cat, but satisfaction brought it back."  A reminder that curiosity can get us in trouble, but that it is an itch scratched by completion, by knowledge.

The same is appropriate here.  After all, the full phrase is...

The point being, if we suffer one bad apple, one bad party, it doesn't stay contained.  It contaminates.  Bad company corrupts good character.  "If you lie down with dogs, you're going to get fleas."

Where we suffer one bad officer, there is a department that becomes corrupted by their silence and inaction.  Look at the Chauvin case.  In that matter, we didn't have other officers in his department speaking out against him, at the outset.  We didn't have other officers trying to stop him in the moment - instead the aided him in his efforts.  The initial police response to the death mentioned nothing about Chauvin's actions and it took four days for him to be charged.  An inexcusable amount of indecision and inaction.

We demand accountability, we pursue action because we have to display, by our words and our actions, that which cannot be allowed to continue.  We speak out against the one, to show everyone else that it's not acceptable.  We point out the bad apples, so the whole bunch is not spoiled.

So if you're going to raise that maxim, at least please follow it through to its conclusion.