To Sir, With Love

A friend who taught me right from wrong
And weak from strong, that's a lot to learn
What, what can I give you in return?

If you wanted the moon
I would try to make a start
But I would rather you let me give my heart
To Sir, with love" 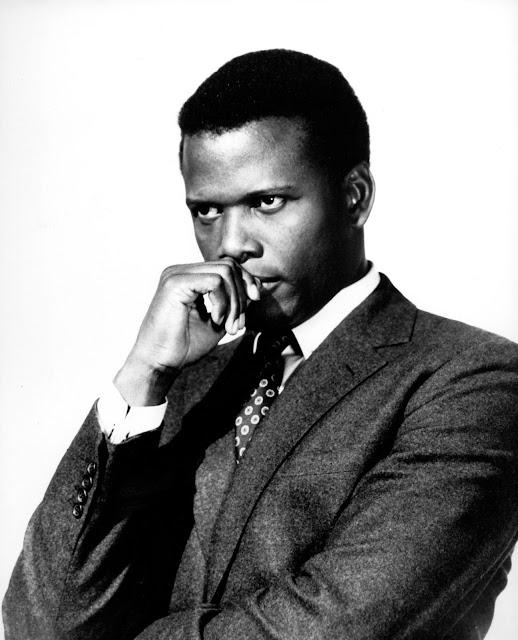 One of the great joys of watching film is discovering great filmmakers.  Not only those who make great art, but also those who live great lives.  Poitier was always recognizable, even to me as a young film viewer.  The voice instantly let you know who was on screen.  And his presence on screen captivated anyone's attention.
Over the past two years, I've really explored Poitier's filmography.  Prior to that, my exposure to him was only through Sneakers and Lillies of the Field.  But over the past two years, we've seen No Way Out, Cry, The Beloved Country, Blackboard Jungle, Edge of the City, The Defiant Ones, A Raisin in the Sun, A Patch of Blue, In the Heat of the Night, and Guess Who's Coming to Dinner.  These roles meant something.  They said something.  And Poitier blazed a trail in them.
"Before Sidney, African American actors had to take supporting roles in major studio films that were easy to cut out in certain parts of the country. But you couldn't cut Sidney Poitier out of a Sidney Poitier picture."
Denzel Washington
Poitier was the first African American to receive the Academy Award for Best Actor, the first in either of the Best Actor/Actress categories.  He has received a Grammy Award, two Golden Globe awards, and a BAFTA.  He further received two Academy Award nominations, ten Golden Globe nominations, two Primetime Emmy Award nominations, six BAFTA nominations, eight Laurel nominations, and one Screen Actors Guild nomination.  In 1995, Poitier received the Kennedy Center Honor and in 2009 was awarded the Presidential Medal of Freedom by President Barack Obama.  He was also named an Honorary Knight Commander of the Order of the British Empire by Queen Elizabeth II in 1974.
He was an icon, an activist, and an ambassador.  He made our film better and he made our world better.  He will be greatly missed.
"Through his groundbreaking roles and singular talent, Sidney Poitier epitomized dignity and grace, revealing the power of movies to bring us closer together. He also opened doors for a generation of actors. Michelle and I send our love to his family and legion of fans."
President Barack Obama
Posted by Mitch at 3:17 PM