A Tale of Two Scientists

Once upon a time there were two scientists who each discovered the same thing independently, but came to wildly different results.  Both are professing believers in Jesus Christ.  Both believe their findings affirm their faith.  To one scientist, it was merely a confirmation of his existing beliefs on the origins of the universe.  To the other, it taught new lessons about the universe.  The comparison of the two highlight the supposed conflict between science and religion and my issues with the Ark and Answers in Genesis.

Both discoveries center on soft tissue found in dinosaur bones.

First, Mark Armitage.  In May 2012, Armitage, a scientist at California State University at Northridge, went on a dinosaur dig at the famous fossil site of Hell Creek in Montana, where he unearthed the largest triceratops horn ever found there. Back at the university, he put the fossil under the microscope and discovered unfossilized, undecayed tissue in the horn. If the dinosaur were 65 million years old, supposedly the soft tissue could not have possibly remained. “Soft tissue in dinosaur bones destroys ‘deep time.’ Dinosaur bones cannot be old if they’re full of soft tissue. Deep time is the linchpin of evolution. If you don’t have deep time, you don’t have evolution. The whole discussion of evolution ends if you show that the earth is young. You can just erase evolution off the whiteboard because of soft tissue in dinosaur bones.” Armitage has since published a paper on his findings, which is the subject of an employment dispute lawsuit withe the University. He claims he was fired for his religious beliefs on display in the publishing of the paper.   He and the University have since settled.

Then we have Mary Schweitzer. Schweitzer, a scientist at North Carolina State University, found collagen fibers in the fossilized leg bone of a Tyrannosaurus rex in 2005. The find was controversial, because scientists had thought that proteins that make up soft tissue should degrade in less than 1 million years in the best of conditions. No one had ever thought to look for it before. “The problem is, for 300 years, we thought, ‘Well, the organics are all gone, so why should we look for something that is not going to be there?’ and nobody looks,” Schweitzer argued.

This wasn’t her first experiment seeing soft tissue. In 1990, volunteering with Jack Horner, a retired professor and paleontologist, the model for the paleontologist in Jurassic Park, she discovered what appeared to be red blood cells in thin slices of Tyrannosaurus rex bones under the microscope. Schweitzer kept asserting they cannot be red blood cells, but Horner urged her to prove to him that they’re not. “That’s the way science should work. You can’t prove something is true. But you can disprove it. I’ve been trying ever since to disprove it. I still haven’t.”

Schweitzer took her discovery to show we still have a lot to learn about fossilization and decay. It was an opportunity to learn something new. “Finding soft tissues that responded to our tests like modern materials in many ways, suggested that after three hundred years of looking at this stuff, we don’t know as much as we thought.”  That “leaves us with two alternatives for interpretation: either dinosaurs aren’t as old as we think they are, or maybe we don’t know exactly how these things get preserved.”

And while Schweitzer used to be a young earth creationist, her work in paleontology has caused to her reverse her position.  "I think the thing that surprised me most about that class was that I had no idea, coming from a conservative Christian background, that scientists are not all trying to disprove God in whatever way they can.  What we were not told growing up is that there's a lot of very rigorous, hard science that allows us to interpret the lives of organisms we've never seen - and knowing this made me rethink a few things, because I know God and God is not a deceiver.  If you step back a little bit and let God be God I don't think there's any contradiction at all between the Bible and what we see in nature.  He is under no obligation to meet our expectations.  He is bigger than that."

Therein lies my problem with the Ark and Answers in Genesis.  The structure of the Ark is very impressive.  To be on the outside and finally have a way to visualize the size of the structure God instructed Noah to build can take your breath away.  Likewise, the interpretation of the interior and and being able to walk through the various levels puts the years of building into perspective.  Everything else though in the Ark is subject to interpretation.  And it's presented with a very specific interpretation.  Presented as fact and incontrovertible.

Ken Ham uses the Ark to present young earth creationism as if it was the only valid interpretation of the Bible.  As if there is no other rational conclusion that believers could come to.  This means dinosaurs on the ark.  This Neanderthals and Homo Sapiens existed at the same time.  This means the ice age followed the global flood.  All presented as scientific fact.  If you don't subscribe to young earth creationism, you will find yourself rolling your eyes in disbelief at several of the exhibits within the ark.  Like the image of the Carnotaur versus gladiators.  When we walked by that diorama, we remarked that we would all like to see that film, but that it's hard to take it seriously in the Ark.

There's also the issue with the amount of license taken from the text of the Biblical account of the flood.  The flood account is very specific on the measurements of the Ark, but is very light on other details.  The Ark has taken great license to give names to Noah and his sons' wives, decor and occupations to their families, and even to create a great backstory for how Noah got boat building experience.  It becomes hard to sort out what is supposition and what is supported, even though they admit to their license.

It represents a fundamental misunderstanding of the purpose of science and religion.

Science is supposed to help us understand the how.  Religion, faith, helps us understand why.  We get into all kinds of trouble when we mix the purposes of the two.

Answers in Genesis likes to use the image below to explain why their version of science is the most correct for the Bible believing Christian.  To them, everything is tainted by a worldview, so it is important to make sure that a Christian worldview must be applied to science first and then and only then should experiments and results be interpreted.  To do otherwise would be to leave important findings to flawed "man's theories." 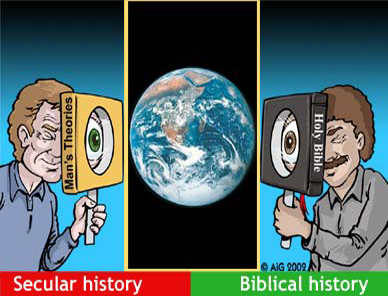 This is an inherent misunderstanding of how science is supposed to work.  Science presents data.  That's it.  Interpretations can be offered, but it's why they are labeled theories.  Best guesses, most likely outcomes based on the existing data.  When new data is received, it changes the theory.  This is important because it is the data that is supposed to lead to the outcome, not the other way around.  Ham's version presupposes an outcome before the experiment.  If you start your scientific experiments looking to prove the Bible correct, that is what you will find.  When you are a hammer, everything looks like a nail.

It's why Armitage's conclusion is so flawed.  He looks at the soft tissue in dinosaur bones, expects to find evidence of young earth creationism, and declares it so.  Soft tissue in dinosaur bones reveals nothing about the age of the dinosaur bone.  Finding soft tissue in the bone just reveals that soft tissue exists.  As Schweitzer said, it can point us to reconsider the age of fossils.  But that is a separate study, that requires more experiments, that requires more data.  It is the start of a new theory, not the conclusion.  And with something like the age of fossils, we have had continued studies that further develop our understanding of the ages and dates of matter.  It keeps point to an older earth.

The finding of soft tissue in fossilized bone should then cause us to do more study and experimentation into our understanding of how decay works.  Again, the start of a new hypothesis, not the conclusion.

"If God is who He says He is, He doesn't need us to twist and contort scientific data.  The thing that's most important to God is our faith.  Therefore, He's not going to allow Himself to be proven by scientific methodologies."  After all, faith is the essence of things not seen.

What was most disappointing about the Ark is that it had the opportunity to be a wonderful tool of outreach, a wonderful tool of Christian unity to speak to outsiders and to reveal something about God and His creation.  And there were glimpses of this.  The size and structure of the ark itself.  Signs that explicitly stated how particular decisions were potential visions of how feeding, cultivating, caring for the animals could have been accomplished.  The section on comparative mythology regarding the various flood myths across religions - this was very impactful.  When that many cultures have a version of the same story, it would seem to increase the likelihood that it has truth in it.

The Ark instead is meant to cater to a very specific Christian, evangelical, conservative view.  It consistently reaffirms this point of view throughout every exhibit.  It preaches to the choir.  Whether it intends to be or not, it is divisive.  And it's a shame.

Hopefully one day, there will be a presentation on this magnitude that isn't hostile to science.  That recognizes that faith and science serve two different purposes.  That they can be complimentary, and not in a way that dilutes one in favor of the other.

This just was not it.