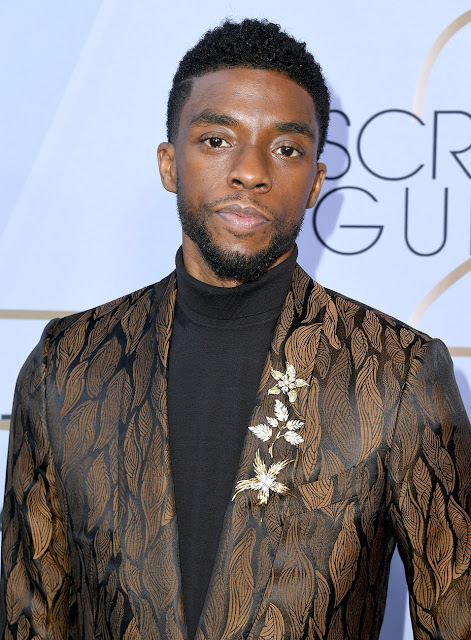 Actor Chadwick Boseman passed away yesterday, Friday, August 28, 2020, from a four year long battle with colon cancer.   He was only 43.

Boseman had made a career out of playing icons of Black history and culture.  Jackie Robinson in 42.  Thurgood Marshall in Marshall.  James Brown in Get on Up.  King T'Challa in Black Panther.  His range was incredible.  Watch 42, then Get on Up, then Black Panther to see how fully he can create and embody a character.  Particularly those that are so varied and complex.

Boseman was also one of those superhero actors that seemed to transcend the role and become a superhero themself.  Like Christopher Reeve, Chris Evans, and Gal Gadot before him, he recognized the power and impact that he had as the Black Panther and used it to greatly impact those around him.  To know that most of his time spent in the role was spent during his battle with colon cancer, makes it even more heroic.

This one hits a little too close to home.  At 43, Boseman's death is a reminder of many things.  That we do not know how much time we will be granted on this earth, so let the important people in your life know how much they mean to you.  How much you love them.  And for the same reason, we should seek to do good to everyone around us.

It reminds us to not take our health for granted.  To get checked out by a doctor, to start colonoscopies and other routine checks when prescribed.

His life over the past four years during his cancer diagnosis reminds us that we do not know what other people are struggling with.   What battles they are facing.  The general public knew nothing of his battle; from his presence on screen, you would think nothing was wrong.  Even in physically demanding roles like the Marvel movies.  That we could all face out battles with such resolve and grace.

In a time in this world in which we need superheroes more than ever, we have lost a bright shining example.  May we rise to the occasion.