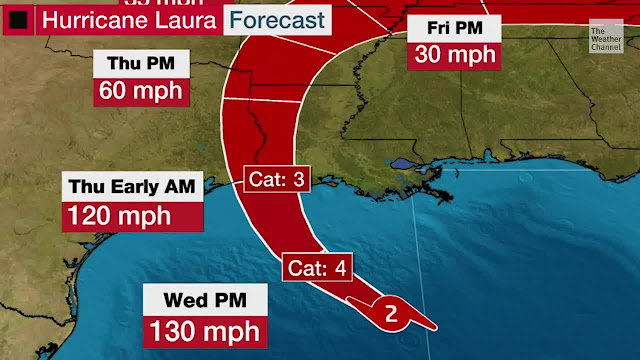 Hurricane Laura is now bearing down on Southeast Texas and Southwest Louisiana.  Now a Category 4 hurricane and potentially intensifying further, the storm is expected to make landfall around Sabine Pass on the border between the two states.  Landfall is expected early Thursday morning.

This is looking eerily similar to Hurricanes Rita and Ike, though potentially much more devastating.  Rita made landfall as a Category 3 storm; Ike a Category 2.  Already, meteorologists are preparing the region for a catastrophic storm surge, as far as 30 miles inland.  Upstream flooding is possible as far as Eastern Arkansas and the Ohio and Tennessee valleys.

For those from the region, the storm represents the worst of the two previous storms.  The intense wind damage of Hurricane Rita.  The extreme flooding of Hurricane Ike.  From my experience, Hurricane Rita devastated the power infrastructure in Buna, causing parts of the town to be without power for two months following the storm.  The were sections of land nearly clear cut from the removal of trees and other structures.  Ike destroyed my grandparents town, turning it into a lake from bridge to bridge.  Their house was up on beams, up a good three foot off the ground.  Water was still in their house up to the top cabinets.

I know evacuation is a long process.  One day I'll tell the story of driving into Houston to pickup my father at the airport the day Rita was to make landfall, trying to then evacuate to Austin.  It was a long day and hot drive.  So, believe me, I understand how difficult it can be to move even a few miles.  But this storm doesn't sound like the one to try to ride it out.  And many of you are under mandatory evacuation orders.  Please follow them - I hope you've already done so.

Though we are far away, our hearts are all with you there.  We're praying for you.  We're thinking of you.  We're keeping tabs on the storm's progress.

Be careful.  Be smart.  Be safe.  Get to higher ground where you can.  And get far away if you can until this is all over.