"These aren't people.  These are animals." 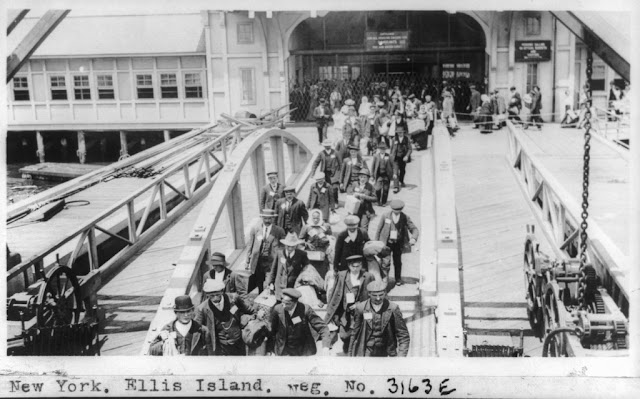 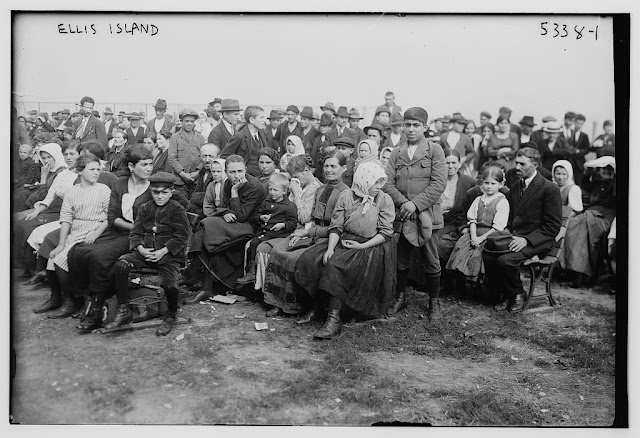 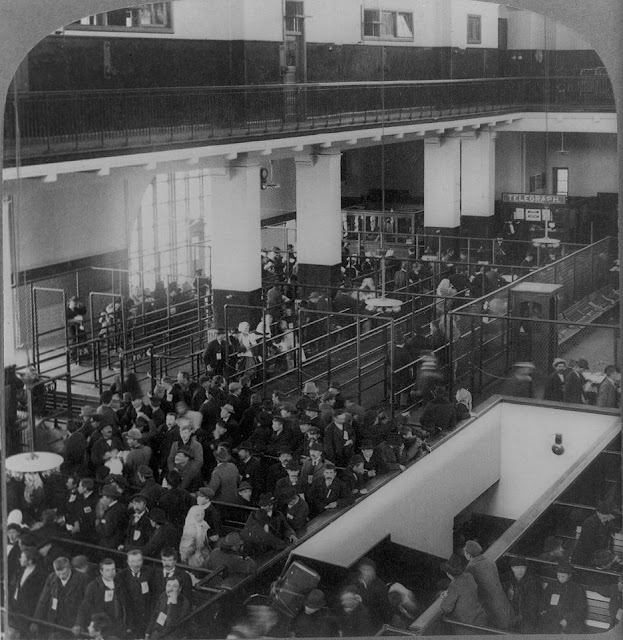 "I am telling the caravans, the criminals, the smugglers, the trespassers marching toward our border, turn back now, because you are not getting in.  Turn back." 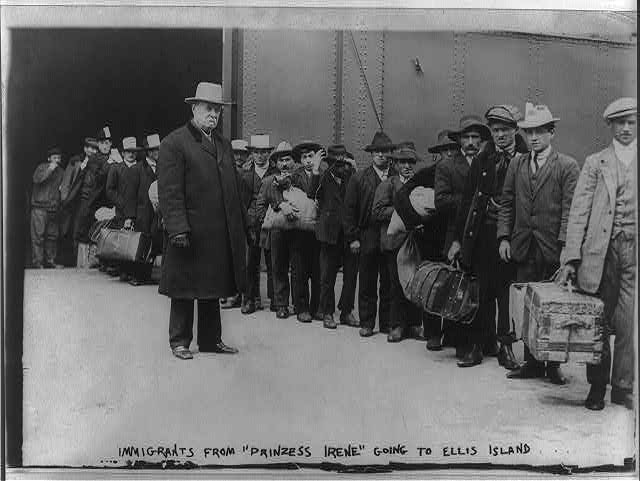 "Many Gang Members and some very bad people are mixed into the Caravan heading to our Southern Border.  Please go back, you will not be admitted into the United States unless you go through the legal process.  This is an invasion of our Country and our Military is waiting for you!" 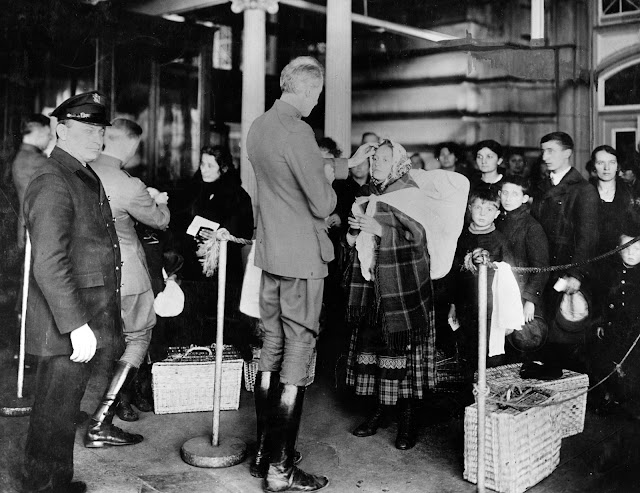 "The Caravans are made up of some very tough fighters and people.  Fought back hard and viciously against Mexico at Northern Border before breaking through.  Mexican soldiers hurt, were unable, or unwilling to stop Caravan.  Should stop them before they reach our Border, but won't." 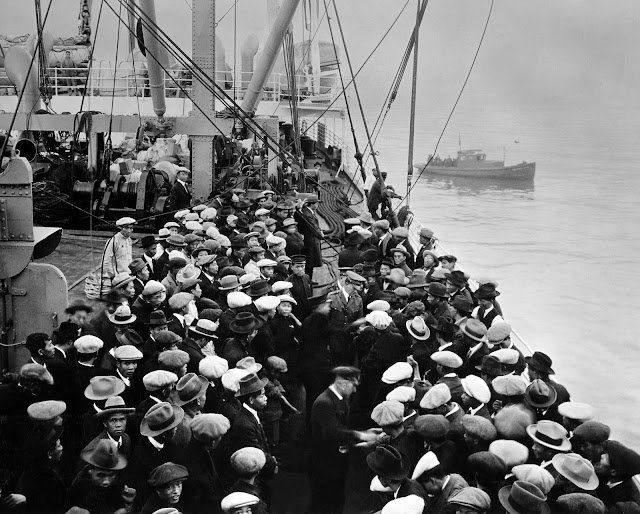 "Why do we want these people from all these shithole countries here?  We should have more people from places like Norway."

The irony of the comments Trump has made regarding the caravan and current immigration should not be lost on anyone.  While we are a nation of immigrants, more than any other on this planet, we have a history of wanting to close the door once our particular branch gets in.

The quotes are not hard to find and are all cringeworthy.

"Few of their children in the country learn English ... The signs in our streets have inscriptions in both languages ... Unless the stream of their importation could be turned they will soon so outnumber us that all the advantages we have will not be able to preserve our language, and even our government will become precarious.

"We should build a wall of brass around the country."

"What means the paying of the passage and empyting out upon our shores such floods of pauper emigrants - the contents of the poor houses and the sweeping of the streets? - multiplying tumults and violence, filling our prisons, and crowding our poor-houses, and quadrupling our taxation, and sending annually accumulating thousands to the poll to lay their inexperienced hand upon the helm of our power?"

"Standing behind them are Christian employers of this land, who would rather import heathen willing to work for barely enough to sustain life than retain a brother Christian at a wage sufficient to live as becomes a Christian.  We do not want Opium or the Chinese who grow it."

"The people of this country are too tolerant.  There's no other country in the world where they'd allow it ... After all we built up this country and then we allow a lot of foreigners, the scum of Europe, the offscourings of Polish ghettos to come and run it for us."

"They are coming in such numbers and we are unable adequately to take care of them ... It simply amounts to unrestricted and indiscriminate dumping into this country of people of every character and description ... If there were in existence a ship that could hold three million human beings, then three million Jews of Poland would board to escape to America."

The last two are particularly hard, for they were trying to escape, and we know what from.  This has to represent one of the lowest parts of our history.  It makes me think of the voyage of the MS St. Louis - the "Voyage of the Damned." The ship set sail from Hamburg to Cuba on May 13, 1939 carrying 937 passengers, mostly Jewish refugees seeking asylum from Nazi Germany.  The ship, helmed by a non-Jewish German made sure his passengers were treated well, a great change from their treatment in Germany.  Upon arrival at Cuba, the Cuban government refused to accept the foreign refugees.  After five days of negotiation, only 29 passengers were allowed to disembark.  The vessel then headed toward the United States, hoping for permission to enter here, but was prevented by the Coast Guard.  The St. Louis then headed to Halifax, Nova Scotia, but were denied again.  The refugees were finally accepted in various European countries, including Belgium, the Netherlands, the United Kingdom, and France.  It is estimated that approximately a quarter of the passengers died in death camps during World War II.  All because no one wanted to deal with the refugees.

The caravan that is coming to this country has been blown out of proportion for political gain.  This is not the first migrant caravan to come through Central America to the United States, though it is a larger one. It is not as large as it has been reported, instead containing only around 4,000 people and growing smaller as the journey continues.  This has not been orchestrated by George Soros or the liberals in America to bring in a large swath of constituents or to drum up a wedge issue.

And contrary to what you may believe, the caravan is not looking to enter the country illegally - they are looking to claim asylum.  "The vast majority of Central Americans have been presenting themselves and requesting asylum.  It's not a picking-somebody-up-if-they're-sneaking-across-the-border situation.  When they encounter the Border Patrol, they're saying they need protection."  That's why the people in the caravan are willing to walk 2,500 miles to get here.  Why they press on despite illness, the weather, and even potential death.  Why they are willing to press on despite potential incarceration at the border, despite a very uncertain reception.  They are not looking to sneak in.  They are walking here as a last ditch effort to ask for help.

For they believe the promise we make of a better life here.

Give me your tired, your poor,
Your huddled masses yearning to breathe free,
The wretched refuse of your teeming shore.
Send these, the homeless, tempest-tost to me,
I lift my lamp beside the golden door!

We have to do better than this -

Mexico should move the flag waving Migrants, many of whom are stone cold criminals, back to their countries. Do it by plane, do it by bus, do it anyway you want, but they are NOT coming into the U.S.A. We will close the Border permanently if need be. Congress, fund the WALL!
— Donald J. Trump (@realDonaldTrump) November 26, 2018

It's fundamental to who we are.

"Remember, remember always, that all of us, and you and I especially, are descended from immigrants and revolutionists."

Franklin D. Roosevelt
Posted by Mitch at 6:00 AM