In the continuing travels of the Keeler crew, we spent Thanksgiving in the Smoky Mountains, in a cabin outside Pigeon Forge, Tennessee.  We had a wonderful time and it became a visit of a lot of firsts.  It was Jamie's first time for a Keeler road trip, as she left on the Sunday before Thanksgiving to head out with my parents and the kids, as well as my sister's family, to get there early and enjoy a few extra days.  My brother and I were able to fly in early Wednesday morning before Thanksgiving to enjoy the rest of the week.

Below are a few pictures and thoughts on the week from our combined collection of photos. 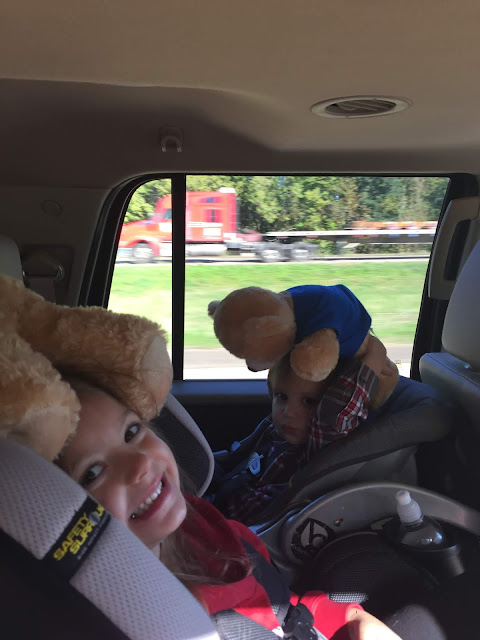 Strapped in and ready to travel.  Both kids were actually troopers and handled the road trip well for the most part.  On the way out, they made it to Birmingham, Alabama the first night, giving them a lot shorter of a trip on Monday morning. 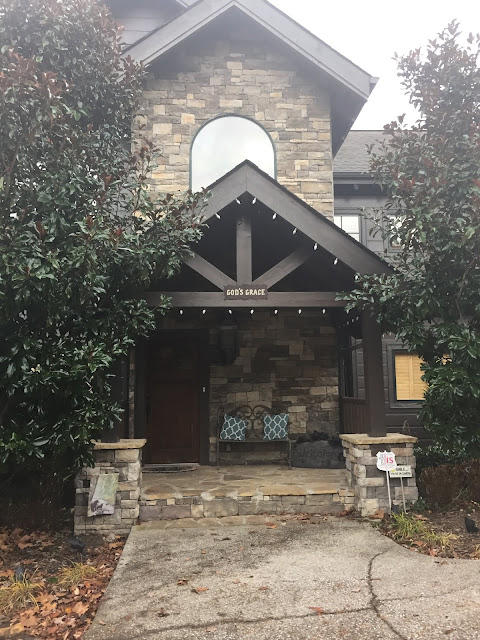 Our cabin - God's Grace in Sevierville, Tennessee.  The entrance does not convey the beauty of this cabin. 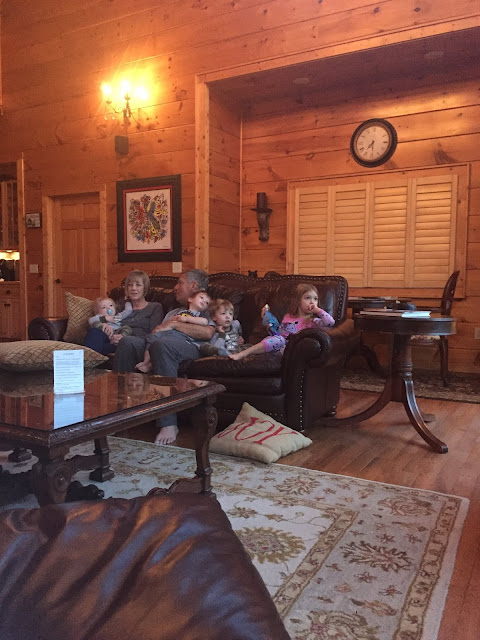 This is what PapaRock and Granna really wanted.  All four of the grandkids together and with them, enjoying the morning. 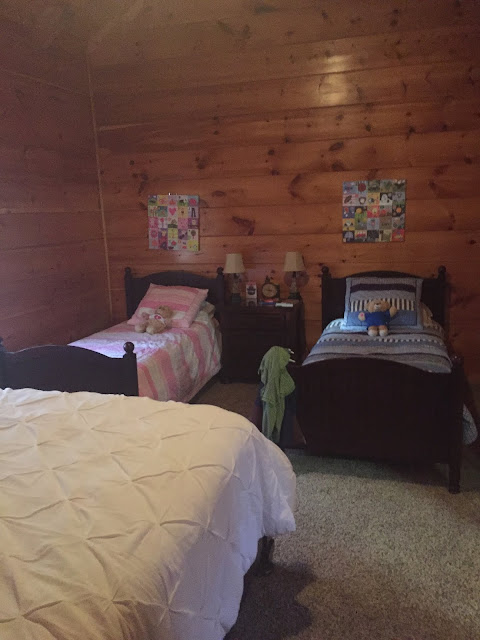 Our room at the cabin.  Perfect for our family.  A king for Jamie and me, an appropriate twin bed for Avalyn and Jude. 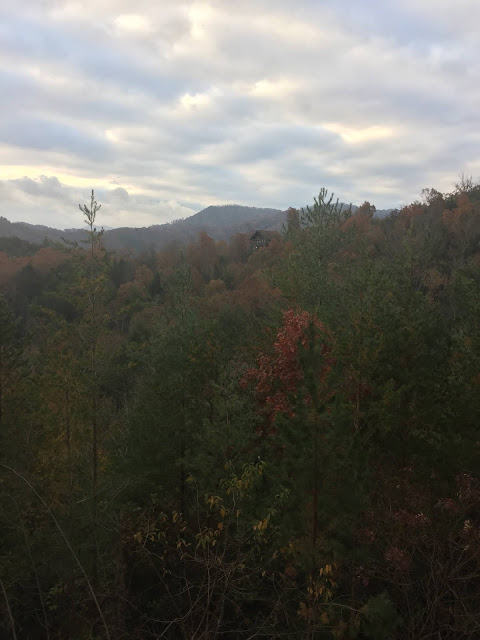 The view from the back porch.  This was great to wake up to. 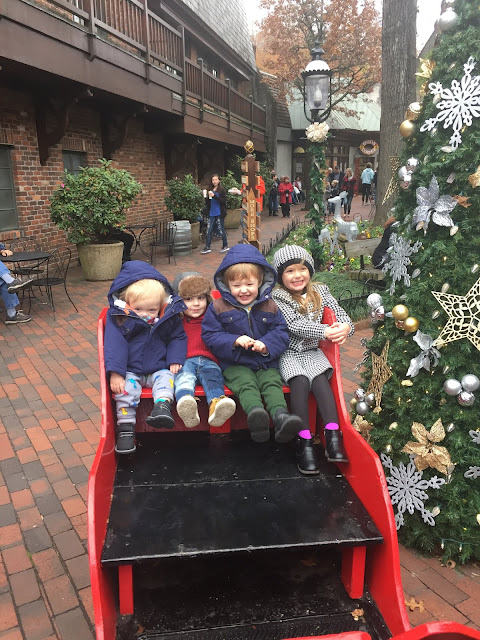 I love this photograph of the four grandkids.  Particularly Jude being hidden away and Archer disappearing in his coat.  Lots of shopping Monday and Tuesday, as well as lots of good food.  Crockett's Breakfast Camp, Paula Deen's, and the Pancake Pantry were all mentioned as standouts. 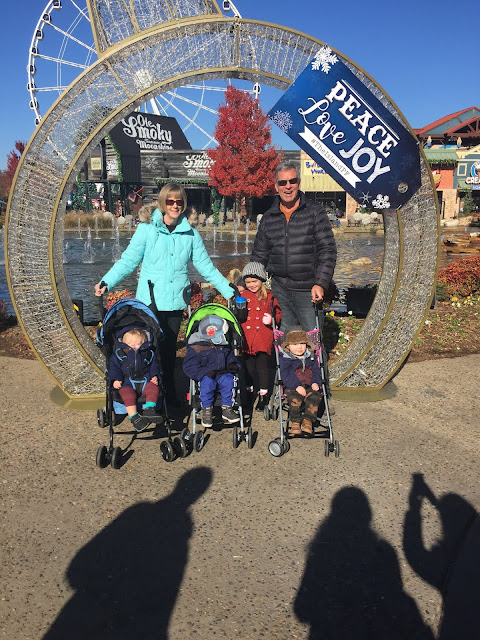 The grandparents and grandkids at The Island on Wednesday, a great shopping and dining destination in Pigeon Forge.  I think they all appreciated Paula Deen's Family Kitchen. 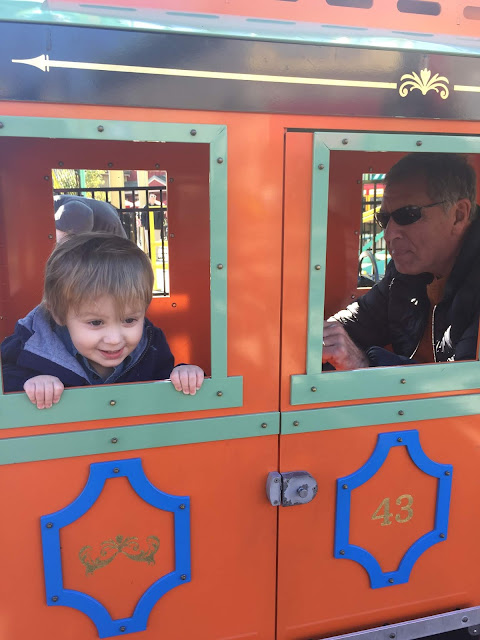 Jude and his buddy PapaRock. 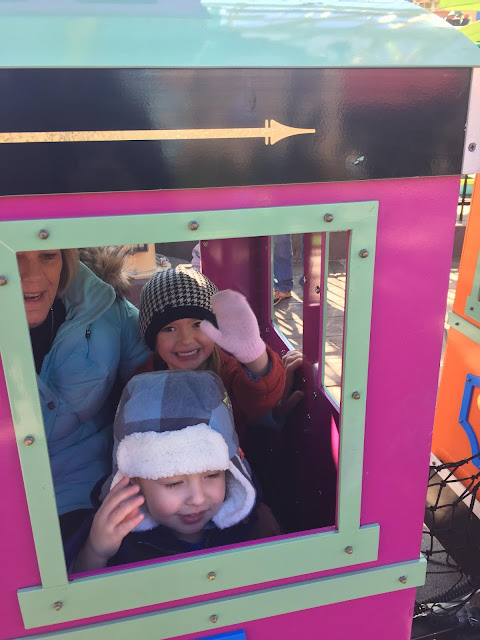 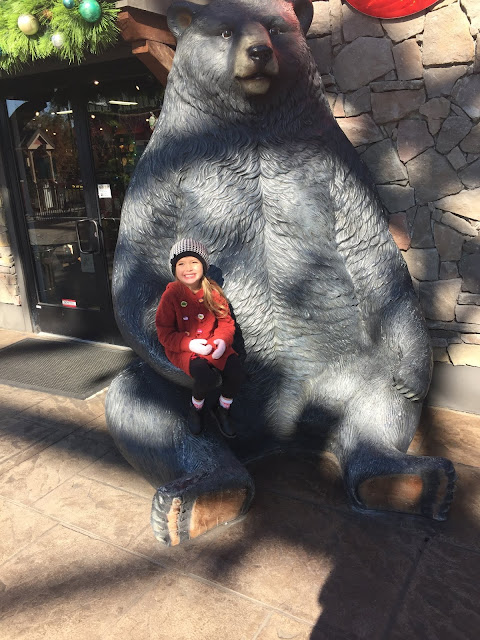 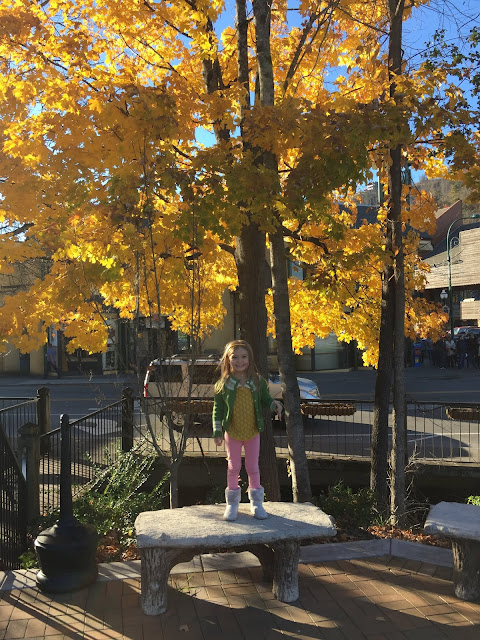 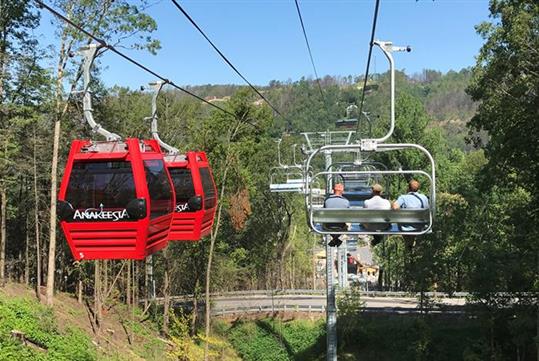 For Thanksgiving dinner, we went up the mountain at a place called Anakeesta.  To get up the mountain they had a combination chairlift and gondola system to get up to the top.  We rode the gondolas going up and it was a very smooth process.  Going up. 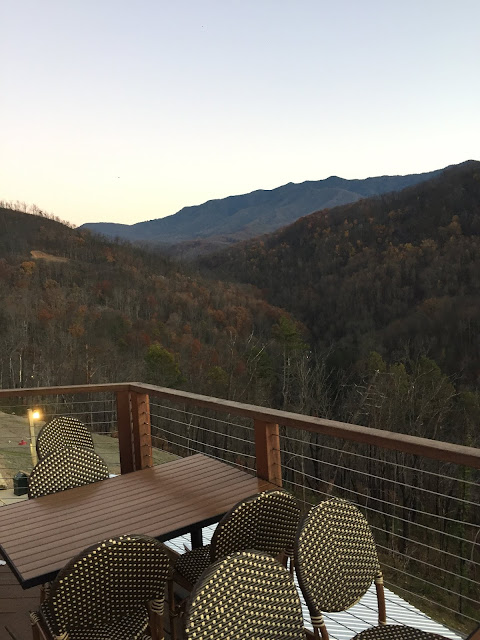 Our view from Thanksgiving dinner.  There was a surprisingly excellent Thanksgiving dinner buffet at the Cliff Top Bar and Grill here.  The turkey was excellently seasoned, the side dishes were great, and the view was amazing.  We hit it right about sundown, so it was an unforgettable experience. 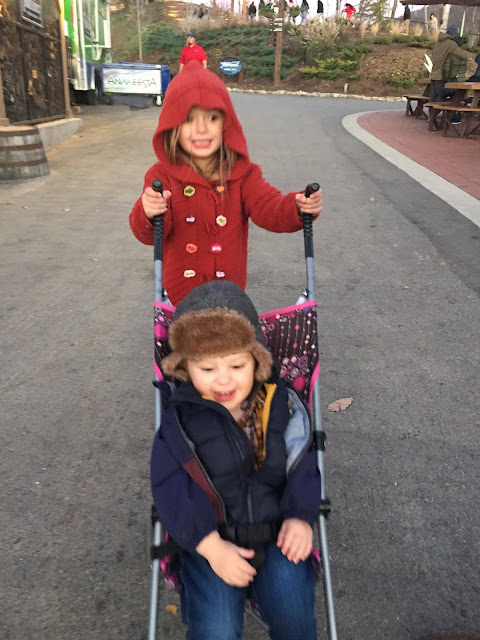 Avalyn wanted to push the stroller around for Jude on the mountaintop. 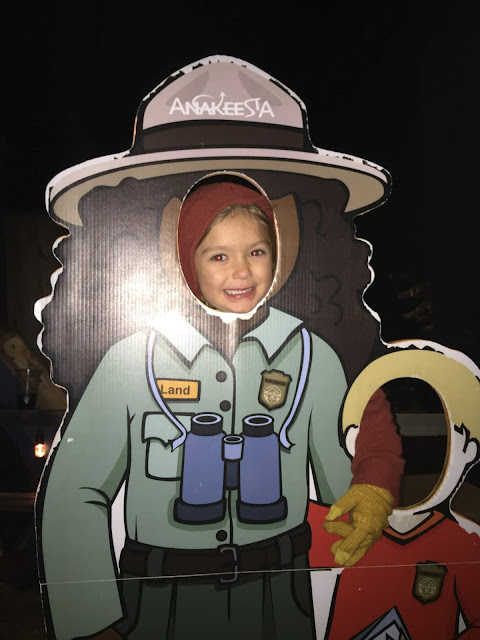 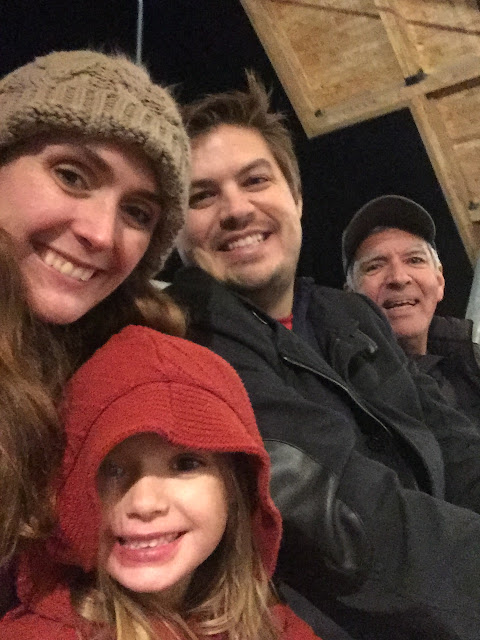 So, going up we road the gondola.  Coming down, we had to break up into various groups.  Because there were only four pairs of gondolas on the system, the wait to get down via the gondola was over an hour by the time we reached the line.  Taylor went down by himself early on in a chair lift.   A little while later, Ryan took Ezra down via the chair lift. Eventually we got Mom, Brooke, and the two littlest ones in a gondola.  The four of us above followed in a chair lift.  It was an experience and Avalyn was extremely proud of herself for making it down. 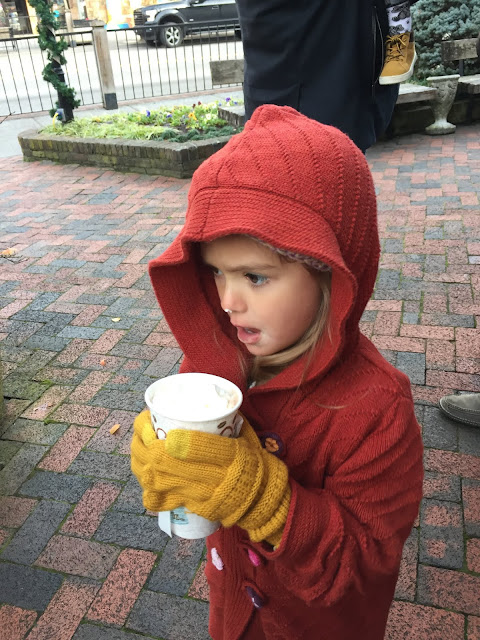 All important hot chocolate from Donut Friar in Gatlinburg.  We went in for hot chocolate while in line for breakfast at the Pancake Pantry.  We went back after breakfast to get donuts because they smelled so good. And they were. 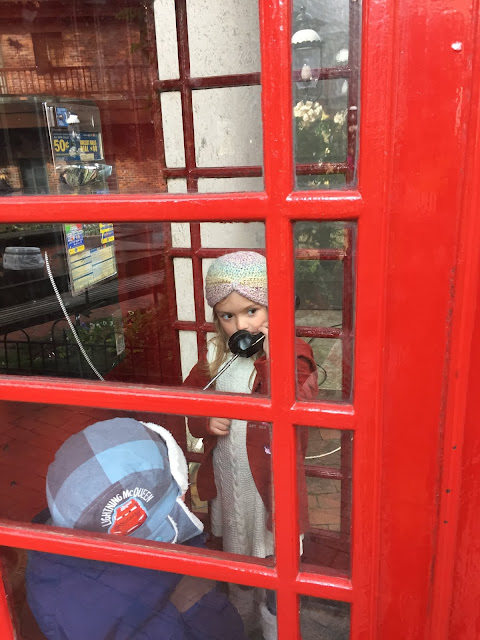 It was hard to convey to these two why these type of phones once existed. 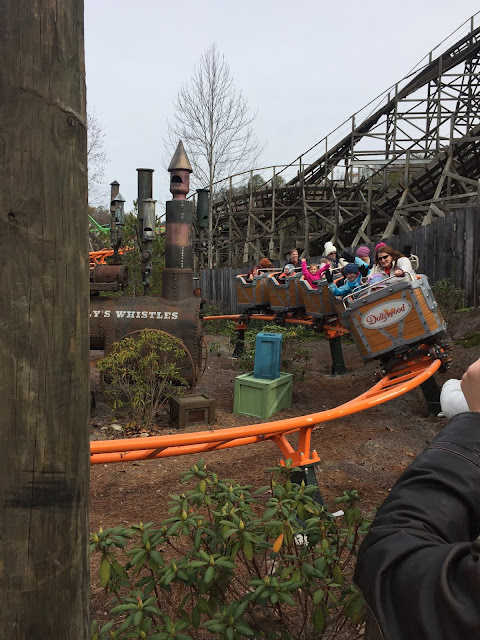 Friday, we went to Dollywood.  It's hard to see in this picture, but my daughter is very much not happy to be on this little kiddie coaster.  Her younger cousin in front of her is very much enjoying himself. 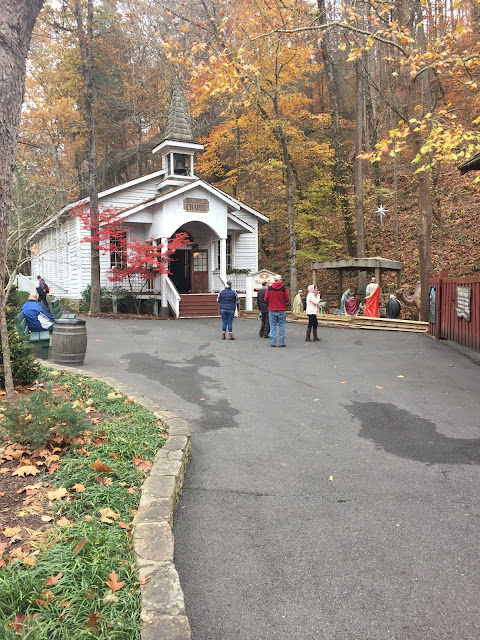 It's rare to have a theme park with a church in it, let alone with a church that still has services on Sunday morning.  It's a beautiful little church.  I tried to get a picture of the statue of Jesus behind the altar, but it did not come out well. 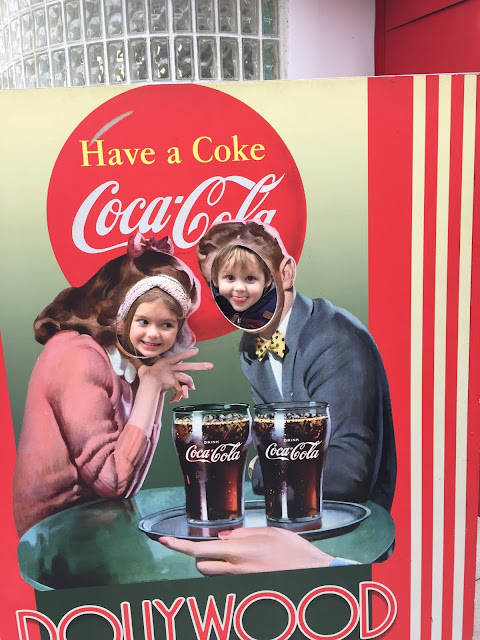 One thing I loved about Dollywood, besides the decorations, was the change in Christmas music as you visited each different section.  The country sections had more bluegrass and folk Christmas music.  The Jukebox Junction section here had the great classic rock Christmas songs by artists like Elvis, the Drifters, the Beach Boys, and many others. 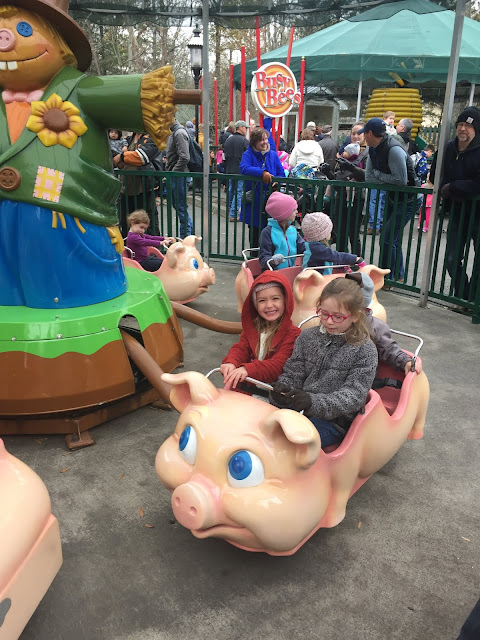 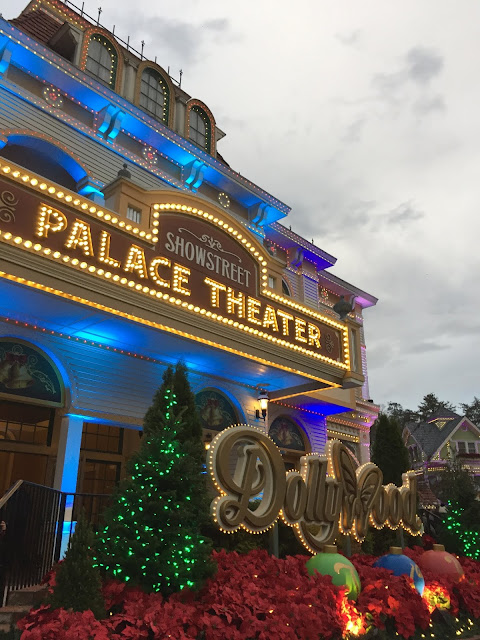 The front of Dollywood makes an incredible entrance.  It's nearly as beautiful as Main Street, though a little more winding. 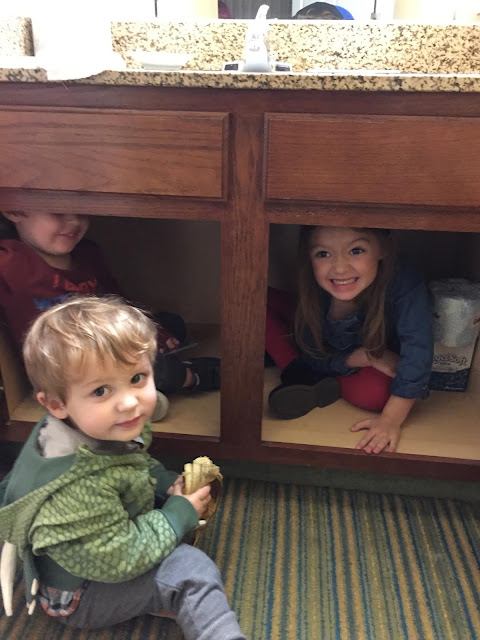 We headed out Saturday morning after Thanksgiving and pushed hard that day to make it as far as possible.  With four under four, that becomes a bigger challenge than it normally would. We were still able to make it to Monroe, Louisiana that night before stopping, reflecting about twelve hours on the road, stops included.  It's always incredible how kids entertain themselves.  I think they had as much fun all hiding under the sink in the hotel in Monroe as they did all trip.

We all made it home safe and sound Sunday, already planning the next trip.