"But I'd like to use a subject from which to speak this afternoon, the Other America.

But tragically and unfortunately, there is another America. This other America has a daily ugliness about it that constantly transforms the ebulliency of hope into the fatigue of despair. In this America millions of work-starved men walk the streets daily in search for jobs that do not exist. In this America millions of people find themselves living in rat-infested, vermin-filled slums. In this America people are poor by the millions. They find themselves perishing on a lonely island of poverty in the midst of a vast ocean of material prosperity.

As always, the words of Dr. King remain as prescient as ever. We see in our nation two Americas.  And I fear the divide has only gotten worse and we are seeing it play out across the country today.
If we want a prime example, we can look at Kenosha, Wisconsin and the disparity between Jacob Blake and Kyle Rittenhouse. 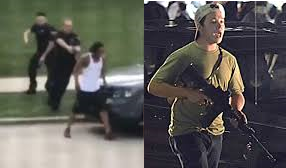 For those unaware, Jacob Blake is a 29 year old African American man, the subject of the most recent police shooting to draw national attention.  On August 23, 2020, police were called to the scene of a domestic dispute, with a female caller alleging that Blake was not allowed to be on premises and had taken her keys.  According to other witnesses at the scene, Blake pulled up near six or seven women shouting at each other on the sidewalk.  Blake was trying to intervene and had three of his children in the backseat of the car.  Blake did have a warrant out for his arrest in connection with charges of third degree sexual assault, trespassing, and disorderly conduct in connection with domestic abuse.  These charges were filed by the woman who had called 911 on August 23.  According to police, the police were aware of these charges when they arrived at the scene.
When the police arrived, they attempted to subdue Blake.  They say he resisted and two officers used tasers on him.  Police allege he had a knife in his hands, though it was not initially seen, and that he fought forcefully with them.  When these initial methods of subduing Blake failed, an officer drew on Blake and shot at him seven times.  Three times missed, four times hit him in his back.

Blake has been permanently paralyzed from the shots.  His three children witnessed the whole event. A bystander who recorded the event said Blake had no knife and was not being violent.
The shooting of Jacob Blake led to an eruption of protests across Kenosha, as early as August 24.  By August 26, the officers at the scene were placed on administrative leave.  Investigations into the shooting had begun.
The protests in Kenosha became riotous early.  Looting, fires, physical damage.  The National Guard was deployed on August 24 and a state of emergency was declared.  By August 25, vigilante citizens armed themselves and took to the streets to help "protect" Kenosha.
That brings us to Kyle Rittenhouse.  Rittenhouse is a 17 year old from Antioch, Illinois, twenty miles away from Kenosha.  Rittenhouse is a self-admitted "police admirer," participating in local police cadet programs and supporting Blue Lives Matter.  On August 25, Rittenhouse obtained an AR-15 and traveled to Kenosha to join with the "Kenosha Guard" militia.  It is unknown how the altercations started, though some witnesses have said that it began when Rittenhouse and other armed vigilantes confronted protestors starting a fire.  There is video of Rittenhouse being chased by protestors who are throwing things at him.  He then opens fire and kills one of the protestors, Joseph Rosenbaum.  He then makes a phone call where he is heard saying "I killed someone."  In another video, Rittenhouse is again chased by protestors before tripping.  While he is down, another protestor Anthony Huber, hits him with a skateboard and tries to take his rifle.  Rittenhouse shoots Huber in the chest, killing him.  A third protestor, Gaige Grosskreutz, then rushes toward Rittenhouse, who turns the gun towards him.  Grosskreutz backs off, then at some point, appears to pull a handgun.  He then moves toward Rittenhouse, who fires and hits him in the arm.
The final video footage has Rittenhouse walking towards the police with the gun strapped around him and hands in the air.  Protestors are yelling at the police that he shot someone, that he killed someone.  They allow him to leave, somewhat appearing to not even acknowledge Rittenhouse.
Two criminals; two very different treatments.
And yes, you read that right - I'm calling Kyle Rittenhouse a criminal.  It was illegal for him to possess that weapon.  He also shot and killed two people, injured another.  Vigilantism is illegal.
Blake injured no one during the altercation that the police were called for, he was paralyzed.  Rittenhouse committed murder, and was allowed to freely leave the scene and state.  He is being charged with murder, but is also receiving enormous support for his defense.  Analysis also suggests that he is most certainly going to be able to successfully plead self-defense, despite placing himself in the situation in the first place (and thus arguably being the initial escalating party).
Beyond the treatment the two have received in the initial incident, we also see the two Americas in the way the two have been treated in the media and in the public conscious since.  Half of America has focused on painting Blake as a hardened criminal who essentially deserved the treatment he received.  This half paints Rittenhouse as a hero, who took the necessary steps to bring law and order back from the unruly protesters.
The other half of America has pointed to the excessive nature of the police action against Blake, and the unnecessary actions of Rittenhouse.  Why would someone drive twenty miles to another town to protect property that was not their own with a deadly weapon if they didn't have an itch to use it?
That seems to be a point that Conservatives do not understand in this entire social unrest.  A point they continually misstate.
George Floyd's name, Breona Taylor's name, Jacob Blake's name are not brought up repeatedly to portray them as heroes, as Conservatives like to say.  Their lives as fathers, brothers, sons, mothers, sisters, daughters, husbands, wives, boyfriends, and girlfriends are not brought up to portray them as saints.
They are discussed to remind us that they are human, not some criminal other.
They are continually mentioned not to lift them up as examples of the people that we admire or promote, but to remind us that they didn't need to be shot.
To remind us that they didn't need to die.
In that context, their past doesn't matter.  They did not deserve to die in that interaction with the police.  It's that simple.
In that context, the Derek Chauvens, the Kyle Rittenhouses of the world cannot be seen as heroic.  They certainly should not be receiving donations through a Christian crowd funding site or receiving praise from elected officials and media personnel.
King closed his speech by confirming his belief that we will close the gap between the two Americas.  He believed it because he recognized a fundamental truth - we need each other.  That neither of the two Americas is sustainable without the other.  "The black man needs the white man to save him from his fear and the white man needs the black man to free him from his guilt.  We are tied together in so many ways, our language, our music, our cultural patterns, our material prosperity, and even our food are an amalgam of black and white."
I pray we see that day.  I pray that we reach the point where we can break through the two Americas into one united state.  Because our trajectory is not sustainable.  And it starts by refusing to buy into the singular narratives each side creates.  By seeking understanding.  By listening.  And hopefully, listening to the right voices.  Because in the long run, oppression will not win.  "The arc of the moral universe is long, but it bends toward justice."
Or to put it another way - it's been a long time coming, but a change is going to come.
One day.

"And I say that if the inexpressible cruelties of slavery couldn't stop us, the opposition that we now face, including the so-called white backlash, will surely fail. We're gonna win our freedom because both the sacred heritage of our nation and the eternal will of the Almighty God are embodied in our echoing demands.

With this faith, we will be able to transform the jangling discourse of our nation into a beautiful symphony of brotherhood. With this faith, we will be able to speed up the day when all of God's children, black men and white men, Jews and Gentiles, Protestants and Catholics, will be able to join hands and live together as brothers and sisters, all over this great nation. That will be a great day, that will be a great tomorrow. In the words of the Scripture, to speak symbolically, that will be the day when the morning stars will sing together and the sons of God will shout for joy."