"A day there was of monumental villainy.  A day when a great nation lost its innocence and naked evil stood revealed before a stunned and shattered world.

A day there was when a serpent struck a sleeping giant, a giant who will sleep no more.  Soon shall the serpent know the wrath of the might, the vengeance of the the just.

A day there was when Liberty lost her heart - and found the strength within her soul." 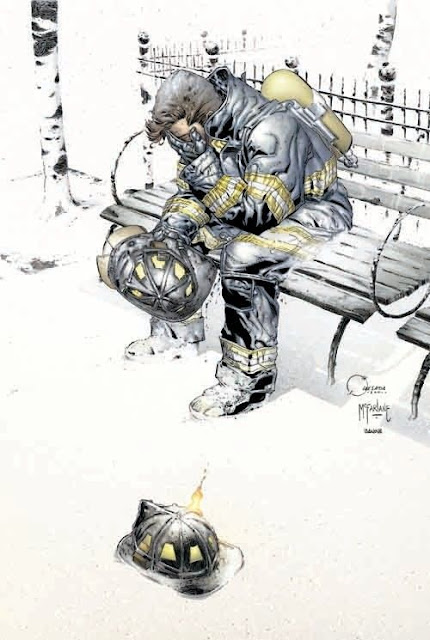 'when Earth's mightiest heroes found themselves united against a common threat.'

Those words were originally written about the Avengers, a band of fictional heroes battling fictional foes.  But they apply as well to the harrowing events of September 11, 2001, and to the men and women who responded to those events.

The firefighters, police, and emergency workers who plunged into danger to aid the trapped and injured.

The rescue personnel of other cities, other states, who came without being called - some who drove all night to come to New York and do what they could.

The ordinary citizens who dropped everything to walk to the site and offer their help.  So great was the turnout that in the end, volunteers were turned away.  There were too many - too many men and women lining up to risk their lives to aid their fellow man.

New York journalist Katie Roiphe may have put it best when she wrote, simply, 'We also have men who are wiling to die for an idea.'

To those who came, those who helped, those who died trying to save others: We thank you. We honor you. We will never forget your heroism."