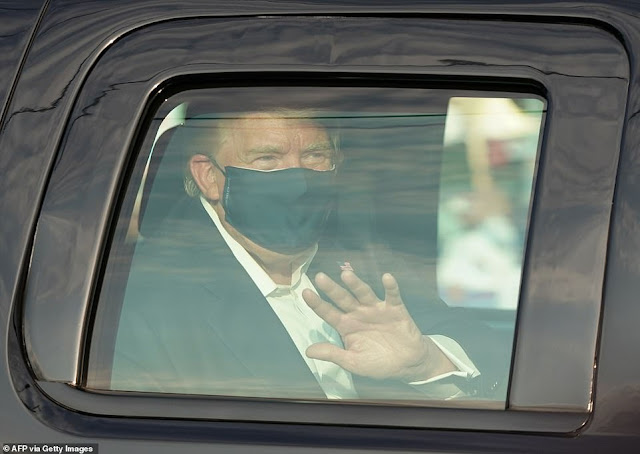 That stark reality comes from a quote from Trump's secret service.  They expressed their anger and frustration to the Washington Post on Friday, as the realities of Trump's infection were coming to light, revealing the pattern of behavior that has continued to put them at risk.

Their words seem to echo a truth regarding Trump's view of the rest of America - he doesn't care about us.

Beyond the extent to which he can use us.

This isn't really the topic I would like to be writing about, but it seems necessary, if for no other reason than to update and correct inaccuracies in Friday's blog post.  Over the past couple of days, several new pieces of information have come to light regarding the timeline of Trump's Covid-19 infection and the impact that it has had.

First, it seems that Trump was infected a lot earlier than we thought.  Trump's doctors revealed yesterday that he was 72 hours into his diagnosis.  This means he would have tested positive on Wednesday morning at the latest.  This means he would have knowingly traveled to his campaign rally Wednesday night and to his fundraising roundtable on Thursday while being positive for the virus.  He did not wear a mask or social distance at these events.

And again, this is the latest that the president would have shown to be positive.  There are indications he may have been positive before or at least believed he could test positive before.

This is important, as it plays to the credibility of the Trump campaign.  Did they provide truthful information regarding the president's status?  This shouldn't be a question that is needed to be raised, but given the president's track record, it is one that we are left with.

Again, this matters because the likely root of the infections in the Trump team seem to stem from the Rose Garden announcement of Amy Coney Barrett as nominee for the Supreme Court on Saturday, September 26, 2020.  This event seems to be a super-spreader, with at least eight reported cases stemming from the event, including likely Hope Hicks, whose announcement started this process, and the president himself.  There were 180 people at the event; only 50 of whom were social distancing or wearing masks.  The others were packed into the event, with handshakes, hugs, and close chatting.

To put this in perspective, with Trump's announcement, twelve members of his team have also revealed their positive diagnosis for the virus.   Eight were at this event.  And this would put the president's potential infection much further back than revealed.

It is part of a continued pattern of misinformation, that is still occurring to date, with details on the president's current health status being particularly obscured. Saturday's briefing left a lot of people confused.  It contained references to 72 hours and 48 hours instead of Day 3 and Day 2 of treatment respectively.  The briefing reported that Trump was doing very well, but later was updated to say the next 48 hours would be critical for Trump's recovery.  Today's briefing revealed that Trump's temperature was high, that his lung scans show unexpected findings, Trump is on a steroid recommended for severe and critical cases only, and his oxygen levels had dropped on Friday and again on Saturday.  There are still no updates on fever or oxygen level and has been a refusal for additional information on his status, a refusal to answer questions.

It makes it very hard to know what to believe, as we truly enter into the unknown.  Will the president be quarantined or under intense care up to the election?  What happens if the president is incapacitated and the 25th amendment must be invoked during this time?  If the worst happens, what happens if he dies?

At such a critical time it would seem to be imperative we had a trustworthy presence.  A leader to emerge to remind us the process is under control.  A reassuring hand that reminds us that he cares.  A president who shows us the way to move forward.

Instead, we've seen the cavalier attitude that he had up to this point and we are reminded of one singular thought -