"Proud Boys, Stand Back and Stand By" 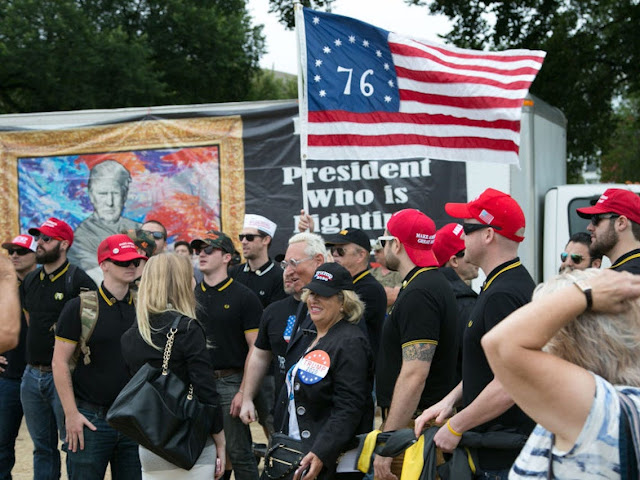 Those seven words should be all that anyone needs to know.

They should send a chill down the spine of every American.

They should represent the end of a political career.  There have been campaigns lost because of an over-enthusiastic "Yeehaw," an over-exaggerated sigh, excessive eye rolling.  Those pale in comparison to the statement made above.

And yet, I have no delusions.

This won't be the end of President Trump.  It's another tick in a long list of offenses that would have ended the careers of any other politician.

Instead it merely represents the lowest point in the worst debate in presidential history.

The debate in and of itself was an awful reflection of modern America society.  It was not a debate.  There was no reasoned discourse.  There wasn't even an opportunity for either side to present their vision for America.  Instead, it was a night of potshots and interruptions, of distortions and outright lies.   - Please don't mistake this for me "both-siding" the debate.   This was an hour and a half of one side repeatedly haranguing the other forcing an outright fight just to keep up.

In what was the worst offense, the President was given an opportunity to knock a softball question out of the fence.  He was given the opportunity to outright denounce alt-right and white supremacist groups.  And he started to indicate that he would. "Sure" he said, then asking for more clarification in the question.  When Wallace offered the Proud Boys as an example, Trump's response was staggering.

"Proud Boys, Stand Back and Stand By."

That's not a denouncement, that's a call to arms.

And the Proud Boys are certainly taking it as one.  Leadership for the Proud Boys has responded that they are proud of the President's mention and have seen a surge of interest in joining.  Social media was ablaze in mentions, with the Proud Boys enthusiastically joining in.  They've even adopted "Stand Back and Stand By" as a slogan, to the point that Amazon has halted sales of merchandise with the phrases.

The sad thing is Trump's language is not as shocking as it should be.  It's part of a pattern of discourse, part of saying there are "very fine people on both sides."  A pattern of repeatedly refusing to call out alt-right groups because they make up a part of his base.  Lincoln appealed to the better angels of our nature.  Trump is appeasing our worst demons.

Trump has attempted to distance himself from his comments at the debate. Yesterday, he lied and said he did not know who the Proud Boys are, but they should stand down.  This might be more convincing if he did not have Proud Boys leadership at his rallies.  They appear in his official campaign videos.  They are the leaders of local Trump groups.

We should all take this as the call to action it should be. VOTE.  Vote them out of power.  Vote early, raise your voice.  Let them know this is not acceptable.