Ken Paxton, Texas, and the Definition of a Frivolous Lawsuit 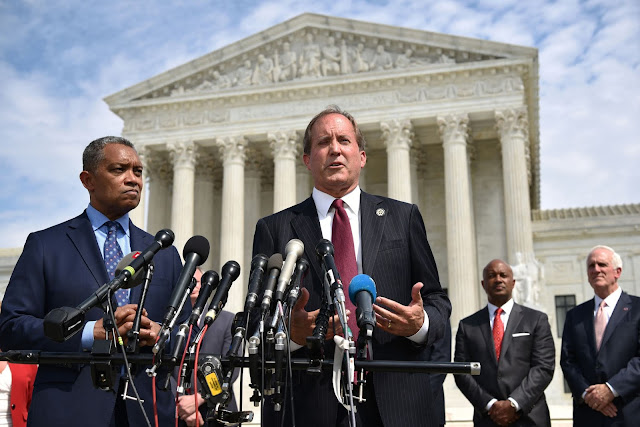 UPDATE: Supreme Court summarily rejected the Texas motion on Friday evening December 11, 2020
Long post, one again I wish didn't have to be addressed.

As if the craziness surrounding this election couldn't get sadder, Texas Attorney General Ken Paxton filed suit Tuesday in the United States Supreme Court to invalidate presidential election results in Pennsylvania, Georgia, Wisconsin, and Michigan.  The filing argues that those states used the coronavirus pandemic as an excuse to unlawfully change their election rules “through executive fiat or friendly lawsuits, thereby weakening ballot integrity,” and that any electoral college votes so cast could not be counted.  According to the suit, this would make the election results in those states unlawful and should be declared unconstitutional.  In the days since Texas filed suit, eighteen other states have joined Texas by filing an amicus brief in support of the lawsuit, as well as the president himself, and 106 House Republicans.  And as if 2020 could not get weird enough, two pseudo-states, New California and New Nevada, have joined with amicus briefs.  These pseudo-states are movements in the two states to form new states from rural counties, separating them out from the urban counties (or separating red from blue).

It's important to underscore that this lawsuit is the very definition of frivolous.  It's political theater writ large, in the form of a baseless lawsuit.  It's the very latest in baseless lawsuits that Trump's team and supporters have made.  Or as election law expert Richard Hasen put it to NPR, "This is a press release masquerading as a lawsuit. ... What utter garbage. Dangerous garbage, but garbage."  One tell, can be found in who is filing the suit.  Ken Paxton, the Texas Attorney General filed, instead of the Texas Solicitor General.  For the uninitiated, the Solicitor General would typically represent and defend the interests of Texas in Supreme Court litigation.  Texas Solicitor General Kyle D. Hawkins, so far, has kept his distance from the litigation.  Likewise, Trump's brief was not signed by the United States Solicitor General or any other Department of Justice Official, but rather John Eastman, a conservative law professor at Chapman University, so Trump could appear in his "personal capacity."

There are other major issues with the lawsuit.

First, the suit will have standing problems, meaning Texas really has no right to sue.  There is no national election process, even for president.  What we have is a system of state elections that are run and managed completely by the states.  This means, Texas has no real say or no injury from how Georgia runs its election, for example.  Combine this with the fact that states must ask for and receive permission to sue other states from the Supreme Court, and you have an enormous uphill battle for the suit to be heard.  The most likely outcome will be that the Supreme Court will simply refuse to hear the case in an unanimous decision with no other comment, just like the outcome of Trump's lawsuit against Pennsylvania.

Second, the Supreme Court really has no authority to move the date the Electors meet and vote for the Electoral College.  That power is explicit in the United States Constitution, Article II, Section 1.  "The Congress may determine the Time of chusing the Electors, and the Day on which they shall give their Votes; which Day shall be the same throughout the United States."  And Congress has set December 14.  Given the time frame of the case, and this impending date, it makes the suit more of final "Hail Mary" attempt to derail the vote, than a legitimate suit.  Especially given the Supreme Court can take forever to vote on these motions.  Texas filed a similar suit against California in February regarding a California law banning state-sponsored travel to states deemed discriminatory against LGBTQ people.  The Supreme Court has, as of yet, not voted on whether or not it would hear that motion.  It would not be surprising for the Supreme Court not to have made any determination before the electors vote on Monday, and after they vote, the Court may view the motion as moot.

It's also pretty clear the case was thrown together hastily.  Paxton in his brief has misstated the number of electors at stake and other simple math mistakes, misquoted Justice Neil Gorsuch, contains circular logic regarding "expert" statistical analysis, and otherwise relies on the same innuendo and conjecture that the previous Trump lawsuits have used, so far to no avail.

To drive home that last point, Trump is 1 and 55 in court to date.  The avalanche of lawsuits that the Trump team has filed have all fizzled out but one.  It's important to note here that they have all largely been dismissed at the outset, at the very first opportunity for frivolous lawsuits to be dismissed.  After the first defendant's motion to dismiss.  This is because there is no there there.  The Trump team has yet to provide substantiated evidence of their allegations.  Their attorneys have even gone so far as to avoid even naming a cause of action like fraud - meaning they refuse to accuse that actual fraud has been committed, but rather raise the presumption that fraud could have been committed.  This is so the attorneys filing aren't disbarred.  Trump's one victory was pyrrhic.  He won a victory regarding the Pennsylvania election to prevent the mail in ballots received after November 9 from being counted, which the state's Secretary of State had already agreed to do.

I'm including a better explanation of the timing of Trump's losses below from a friend from law school, in which she outlines the initial filing process and the point at which his cases are being dismissed.  Why it matters, emphasis mine.

"It's clear to me after looking at Facebook that a quick legal lesson is in order for those who are confused about Trump's lawsuits regarding the election.
When you file a lawsuit, you have to have a minimal level of proof that what you are saying is true.
You don't have to prove your entire case before you file it. The process of discovery is designed to have both parties exchange documents and information in the course of the lawsuit.
For those who hate frivolous lawsuits, there are several stages of the process where a Defendant can ask the judge to get rid of the lawsuit because the Plaintiff can't carry their burden in proving their case.
The first stage of getting rid of a baseless lawsuit is right after filing the lawsuit. Personally, I have never seen this happen in any case I have filed. Because I don't file baseless lawsuits. (There's a duty that lawyers owe to the court under Rule 11 which prohibits that.) But, this is an important safeguard to stop baseless lawsuits. So, if I am sued by someone I have no connection with and there is no evidence I have done anything wrong, this is when I would file a motion to get rid of the lawsuit. The standard applied to this type of motion is high. And It basically just means that the evidence attached to the lawsuit is fraudulent or fake or that even assuming all of the evidence is true, the Defendant did nothing wrong under the law.
This is the stage at which all but one of Trump's election lawsuits have been dismissed. I think this is being lost somewhere on people who care. The last count I saw was that this has happened 39 (now 55) times and only 1 lawsuit has even been permitted to proceed to the next stage.
I can't express how rare this is or how deeply it shows how baseless these lawsuits are. This is not a normal thing that happens in lawsuits.
These lawsuits have been dismissed largely by Republican-appointed judges, even though that shouldn't matter. And they have been dismissed with some of the strongest language I have even seen coming from federal judges.
In case you are confused by these baseless lawsuits, the election is over. Even though our President is acting like a toddler and cannot accept reality, reality and the facts do not care about his feelings. He will stop being the president on January 20, 2021 at noon by operation of law. Because the law still matters, no matter your feelings about it."
And that's our one source of hope.  The law still matters and there are those that are still dedicated to upholding the law.  Country over party, even country over appointer.  The Supreme Court itself, all 9 justices including his recent appointees, refused to hear Trump's appeal over the Buck County Pennsylvania ballots.  The four states at issue in the suit have roared back in a blistering response, firmly denouncing Texas's actions and telling it to butt out of their elections.  "The court should not abide this seditious abuse of the judicial process, and should send a clear and unmistakable signal that such abuse must never be replicated."  Twenty two other states and territories have filed amicus briefs supporting the defendants.  Republican Senator from Texas John Cornyn has issued his own rebuke of his state's actions.  "Number one, why would a state, even such a great state as Texas, have a say-so on how other states administer their elections?" and "I read just the summary of it, and I frankly struggle to understand the legal theory of it... It's an interesting theory, but I'm not convinced."
That's because there is no cogent legal theory.  This is political - just as it has always been.  The prevailing thought is that Paxton filed the suit to curry favor with Trump for a presidential pardon.  Paxton has been indicted for securities fraud and is currently being investigated by the FBI for abuse of authority.
That's where we are, currying favor of a lame duck president because of the influence he has over the party.  How he has shaped the GOP into his personal party and how Republicans are too afraid of upsetting his base with reality.  Especially given his floated interest in running again in 2024, meaning he will continue to influence the actions of the GOP for years to come.
It would be laughable if it were not for the millions of Americans who stand by and accept his every word and accusation.  As if he were the only person telling the truth.  The depth of conspiracy you have to believe where literally everyone is out to get you except for the ones who support this man.  That is what makes this terrifying.
It's the beginnings of a stupid coup.  And I use that term, because if it happens, it happens through our sheer stupidity.  So far, we have every signal that it will not succeed.
But if you want to look for the battle lines of Civil War 2: Electric Bugaloo, look no further than this case.
Posted by Mitch at 4:14 PM