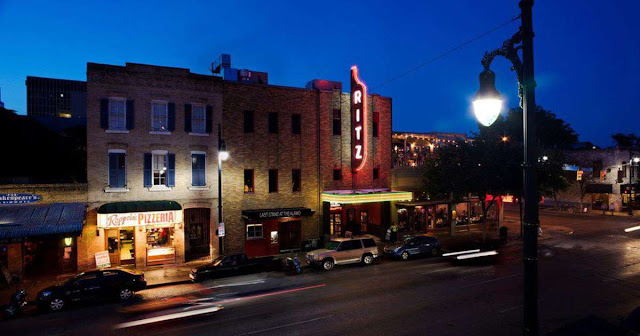 In one of the saddest bits of corporate news for me personally coming out of this pandemic, the Alamo Drafthouse has filed Chapter 11 bankruptcy.  The company is selling all of its corporate assets to Altamont Capital for restructuring and reorganization. The worst part is the closure of three of their theater locations:  Kansas City, Missouri, New Bruanfels, Texas, and the Alamo Ritz, Sixth Street, Austin, Texas.

The Alamo Ritz location closing hurts. This was a rescue of a classic movie theater on Sixth Street, restoring it to its hey-day. Built in 1929, the prime location at 6th St and Trinity had been a first run movie theater, an adult film theater, a music hall and a comedy club. Restored and reopened by the Alamo in 2007 as a replacement for their original location, the Drafthouse at the Ritz became the center of the Alamo world. A fixture of Fantastic Fest, of Butt-Num-Athons and many of their unique offerings. Sure, the Alamo had several other theaters around town, but they looked like the Alamo product opened in cities across the country. For those of us old enough to know so, the Ritz was the Alamo.

For me, the Ritz was home to several of my favorite film experiences. The 70mm road show presentation of The Hateful Eight, with the overture and intermission. The Holiday Sing Along with two friends of friends that I just met, leading into caroling the bars on Sixth Street. The Blazing Saddles quote-along, with Tim, complete with whoopie cushions for the beans scene, a cap gun, kazoos, and a very uncomfortable confirmation that the audience was all white. Then busting out into a pie fight in the middle of Sixth Street, with oncoming traffic.

I’ve seen films in a lot of great theaters in Texas. The Paramount on Congress Ave for White Christmas. The Texas Theater in Dallas for a special TCM presentation of Rio Bravo with Ben Mankiewicz and Angie Dickinson.  Jaws on the water in Lake Austin.

But the Alamo Ritz will always hold a special place in my heart.

Remember the Alamo Drafthouse!  Here’s hoping the new owners don’t change you too much more.