Yuletide - Happy Holidays, Merry X-mas, and The Mythical "War on Christmas", A Reminder

Or, why there is no war on Christmas and has never been one... 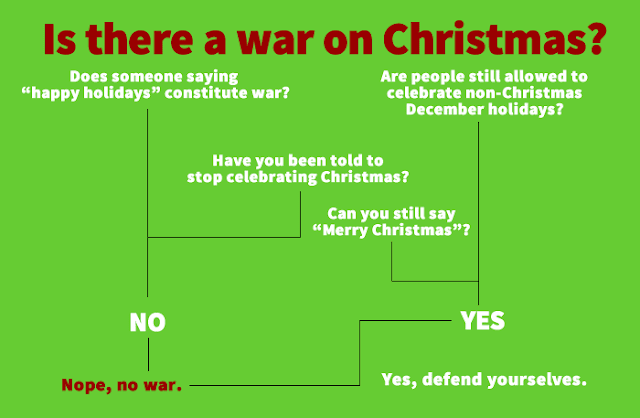 It's being perpetuated more now with the arson of the Christmas tree at Fox News.  No, that's not a war on Christmas, just Fox News.  Perhaps with their coverage over the past few years it was Antreefa?

This myth gained popularity in 2005 when radio host John Gibson published a book ("The War on Christmas: How the Liberal Plot to Ban the Sacred Christian Holiday is Worse Than You Thought") alleging liberal antagonism toward the holiday.  Even Mr. Gibson is surprised by the response his book got and feels the modern claims of the "War on Christmas" go farther than his book ever imagined.  His book focused on things that rarely happen any more - educators and local officials banning nonreligious symbols like Santa Claus or a Christmas tree out of a mistaken belief that displaying them violates the First Amendment.

Clay Shirky
It's important not to get these mixed up.  "Happy Holidays" has gained favor because it is a recognition that there are many different holidays celebrated from Thanksgiving to New Year and that there are many different variations of the Christmas celebration that may not be observed by all.  "Merry Christmas" is a phrase that truly refers to two days specifically - Christmas Eve and Christmas Day.  While we often call the month of December the "Christmas season" it is more appropriately the holiday season.  Los Posadas processions and celebrations begin on December 16.  The first night of Hanukkah began on the evening of December 18.  Winter Solstice is December 21.  Kwanza arrives on December 26.  Epiphany, or Three Kings Day, will not arrive until January 6.  Even Festivus is growing in popularity for December 23.  These holidays represent a wide variety of celebrations over the season that involve members of nearly every major religion, variations on Christmas from every denomination, and non-religious alike.  "Happy Holidays" is the most inclusive term for this period of time, encapsulating a greeting that wishes everyone well.  It's not meant to exclude Christmas, it's simply meant to include everything else, and such a phrase makes sense in the retail world, where it is most often applied, as you want to cover the widest possible customer base.
It should be noted that Jews, Muslims, and other non-celebrants say they are not offended by a "Merry Christmas" greeting.  Perhaps, it's our turn not to be offended by a "Happy Holidays" greeting, and to share the sentiment with a hearty "To you as well" instead of a biting "Merry Christmas" correction.
Another variation on the same thing is the outcry over the use of X-mas instead of Christmas, again trying to say that people are quite literally trying to remove "Christ" from the celebration.  This could not be further from the truth and ignores the history surrounding the X.  For starters, the letter is not an X at all, but the Greek letter chi (C/c), which is the first letter of the Greek work  Χριστός which in English is "Christ." The abbreviation has been used from at earliest possibly 1551.  The X has been used in abbreviation of Christ's name (specifically as part of the Chi Rho -  ⳩) possibly as early as 312.  "Xian" and "Xtian" have even been used to abbreviate Christian.  Far from a removal of Christ, the usage is part of a long tradition of remembrance.

"Those are good reason.  Christmas is not only getting too commercial, it's getting too dangerous."
Linus van Pelt
In truth, biggest reason why there is no "War on Christmas" is the very thing that most endangers our religious observance and most attempts to remove Christ from the holiday - Christmas is too big of a money maker to be ignored, downplayed, or warred against. Too many business and people depend on the spending on the secular and religious observances of Christmas to make ends meet.  It's one of the reasons given for the name Black Friday; Christmas shopping after Thanksgiving would bring companies into the black (myth it may be).
And it's this focus on the commercial aspect of Christmas, on what we can get and what we can buy to give, that really takes our focus on the true meaning of the season for followers of Christ.  On the greatest gift we know ever to have been given.  And to that, it's less of a war and more of a surrender.  It's Christians freely and willingly getting wrapped up in everything else that Christmas brings and letting it crowd out all memory of what it is supposed to represent.
So, instead of worrying about how others celebrate this season, or worrying over a misunderstanding of an abbreviation, how about we focus on keeping the memory of the true meaning of the season.  Of carrying that inward guidance of the greatest gift freely given.  To have that spirit guide us to rejoice with exceeding great joy.  To be generous and merciful and to extend that spirit to those around us.
And in that spirit, I wish each of you a very Happy Holidays, whatever you may be celebrating, and a very Merry X-mas!
Posted by Mitch at 10:26 AM