Navigating Media Bias and Its Effects

This is a blog that I've been trying to put together for a while.  I had the what and how, but did not have the why beyond a very esoteric idea.  Then I ran across an article recently that put the why into perspective.

We all know the problem.  In this day and age, in the era of 24-hour news stations and the rise of opinion news, hot takes by nearly everyone on the internet, dis- and mis-information campaigns, "fake" news, clickbait headlines, trolling and bots, it is very difficult to find news and information sources that are reliable and trustworthy.  Even more difficult to find news sources that will give you facts alone that are not overloaded with opinion.  News sources that allow the viewer or the reader to reach their own opinions, instead of providing them for you.

To that end, I find it beneficial to rely back to a few sources to determine the particular bias or bent of a particular news source. One resource is the chart below, generated by an interested amateur, who explained and documented her methodology here. 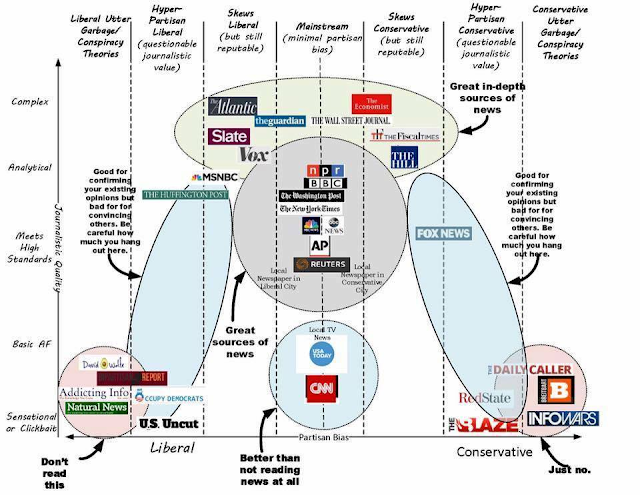 The chart, at the very least, gives a quick overview of prominent news sources and where they fall in terms of depth of coverage and political/social bias.  Most of the news sources on the chart, at least in terms of where they fit in terms of bias should be recognizable.  It's no surprise that Fox News has a conservative bias and MSNBC has a liberal bias.  The question would be one of degree.  And this particular chart gets a little less helpful with nuance, particularly with the sources identified closer to the middle.

For a more in depth evaluation of bias, there are a couple of websites that are beneficial.

This can be a little more helpful in pinning down sources closer to the center, as to find a lean right or lean left bias.  There is disagreement among the different services, so it only represents a start, not a conclusion.

What's left is the why.  Why does this matter?  If I have found a news source that I like and feel I can trust, why is it important to know their bias?  And beyond broader calls for understanding across the spectrum, I ran across a study that someone had shared that brings this all into perspective.

Business Insider ran an article on a study conducted by Fairleigh Dickinson University based on a new PublicMind survey to determine the most informative sources of news.  Researcher's asked 1,185 random nationwide respondents what news sources they had consumed in the past week and then asked them questions about events in the United States and abroad.  On average, people correctly guessed answers to 1.6 of the 5 questions about domestic affairs, and 1.8 of the questions about international affairs.  They then broke the results out by the particular news sources relied upon by the participants.  The study seems to reveal that our most popular national media sources - Fox, CNN, MSNBC - seem to be the least informative.  In fact, participants who obtained their news chiefly from Fox fared worse in both sets of questions than participants who admitted to not watching the news at all.  MSNBC did not fare much better, also trailing behind those that watched no news at all in the international questions.

Now, the study is not perfect and should not be viewed as the ultimate arbiter of the value of these news sources.  We can point to questions regarding the size of the participant population, selection process, other factors affecting news absorption, and potential selection bias in the questions posed.  We can discuss how the study cannot truly point to causation and disheartening that even the highest average for a news source never reached 2 questions out of 5.  Still a failing grade.

But when viewed in context with the bias chart and bias determinations, we see a continuing refrain:

So, where to go from here?  The following would be my recommendations; take them for their worth:


The new media landscape we have created can be a minefield to navigate.  As always, be safe out there.