To all who come to this happy place:
Welcome.
Disneyland is your land.
Here age relives fond memories of the past - and here youth may savor the challenge and promise of the future.  Disneyland is dedicated to the ideals, the dreams and the hard facts that have created America - with the hope that it will be a source of joy and inspiration to all the world.
Walt Disney, July 17, 1955 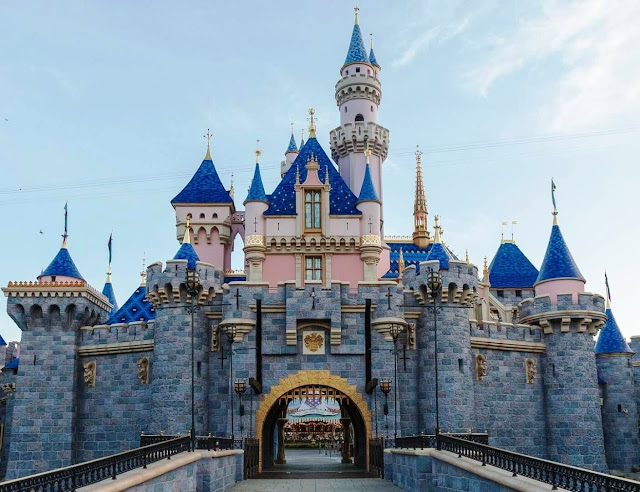 Sixty-five years ago today, Disneyland opened its doors for its first visitors.  A special “International Press Preview” event was held, only open to invited guests.  Six thousand invitations were mailed, but by mid-afternoon, over 28,000 ticket holders were headed for Disneyland.
Even as the gates opened, workmen were still planting trees.  Paint applied earlier that morning was still wet to the touch and asphalt poured that morning on Main Street was so soft that women’s heels were sinking in.
Southern California was suffering from a record heat wave with temperatures over 100 degrees.  Drinking fountains were dry, rides broke down shortly after opening, and many places ran out of food and drink.   The park would even suffer a gas leak in Fantasyland, causing Adventureland, Frontierland, and Fantasyland to close for the afternoon. This would leave only a very anemic Tomorrowland and Main Street USA open.
It wasn't the best opening ever.
This year, Disney's celebration is a little muted as well.  Of the twelve parks Disney has internationally, only seven of them are open.  Disneyland itself remains closed indefinitely, as plans for California keep getting pushed back.  Though Walt Disney World is open now, there is talk with rising infections in Florida, it may have to close again, or scale back to just the Magic Kingdom and a few resorts.
No matter the current situation, Walt's dream remains.  The idea of a place where families can gather and all participate.  Where you leave reality beyond.  Where you are truly transported to some place often magical.
That is why so many people are waiting for it to open back up.  In watching the Imagineering documentary on Disney+, they talked about how in Japan after the tsunami, the government does not give an official declaration that everything is back to normal.  How the populace looked to Tokyo Disneyland to be the arbiter of when things were truly ok again.  When Tokyo Disneyland opened again, there was a sense that normalcy had finally returned.
We're all waiting for that magical moment, and it seems so far away.
Until then, Happy Birthday Disneyland!  May you weather this one, to brighter ones to come.
Posted by Mitch at 5:15 PM