Today, masks become mandatory in Indianapolis and Marion County.  Everyone over two will need to where them out in public in places where it is not possible to stay more than six feet away from those that are not in the same household.  It is a similar order to the ones already in affect in three other counties in Indiana and has no expiration date.
This is not a surprise to us.  We have been operating as if this order was always in effect.  We where masks when we have to go out and shop.  Even the few times we have gone in somewhere to eat, we have worn them while waiting and ordering.  We each have multiple masks and have had fun picking out styles and patterns that matches our interests.  Jude has been so excited about having a Nightmare Before Christmas mask, he has frequently worn it in the house.
We've even made a point of making it exciting for Avalyn to get the multiple masks she will need for school.  She's gotten to pick one out each week at the local farmer's market.  So she can have styles like Frozen II and Star Wars that she really likes.
I have my Marvel mask that I wear everywhere out in public.  The only major exception is on the morning walk on the trail, where I'm basically isolated.
So, this will be business as usual for us, even though it is not affecting our specific county yet.
This order comes not because of an increase in cases in Indiana, but out of an abundance of caution.  Especially as the number of cases in neighboring states has been increasing.
Which highlights the problem we have been having in this country keeping COVID-19 under control.  Without national guidance, without leadership that is factoring the differences of specific states into their guidelines, we've created a system in which has fostered the petri dish that we have in which our national numbers keep growing exponentially.
We have thirty-six states with rising positive cases.  Texas has become the 11th largest pocket of cases per million people in the world, leaping over many countries.  Florida likewise is seeing a tremendous rise in cases.
We've never had a decline cases, we never flattened the curve, we're still in a first wave.
We never got this under control.
Largely because we never had leadership on this issue.  And what leadership there was frequently combated their experts, undermined their recommendations, and caused unnecessary confusion on pretty simple issues.
Like masks, for instance.
Despite masks being the simplest way to get this under control, we have had too many people in high positions that have been outright combative to the need to wear masks for public safety.
And before the comments start coming, I'm going to start muting people that continue to spread misinformation that masks lead to hypoxia or that it's part of some slow-burn conspiracy to keep conditioning us toward having our rights taken away.  One represents a fundamental misunderstanding of science, the other a complete misunderstanding of government.
If you look at the countries that are starting to see a positive trend, if you look at Asia as it has been reopening, masks have been the key.  Countries like Japan, Hong Kong, South Korea, and Taiwan, all provide ample evidence of the benefit of masks.  Japan in particular is interesting, as masks were largely its primary tool in fighting off the virus.  Japan has had no lockdown, but encouraged people to stay away from enclosed spaces with poor ventilation, crowded places, and close conversations.  They also have high mask use.  Yet, even with densely packed cities like Tokyo, their transmission and death rates have been shockingly low.
So, once again, I urge you, all of you, everywhere, wear the mask.  It is, quite literally, the least we can do to fight off this surge in cases and deaths.  Literally the least we can do to help get everything back on track.
And if you are not, if you won't, why not?  Seriously, what keeps you from doing something so small for to protect yourself and others?  I understand breathing related health issues and I understand claustrophobic anxieties, but everyone else who refuses because of some misguided notion of freedom, I will never understand.
Do your part.  Wear a mask.
Please.
I would like this all to end at some point. 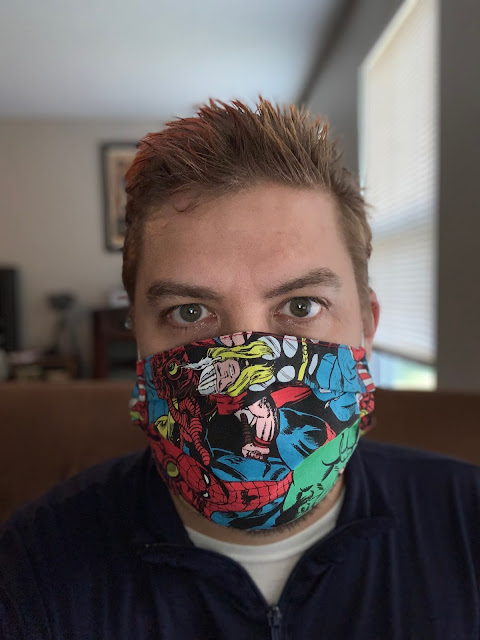