And the grave-digger puts on the forceps
The stonemason does all the work
The barber can give you a haircut
The carpenter can take you out to lunch
Now, but, I just want to play on my pan-pipes
I just want to drink me some wine
As soon as you're born you start dying
So you might as well have a good time, oh no 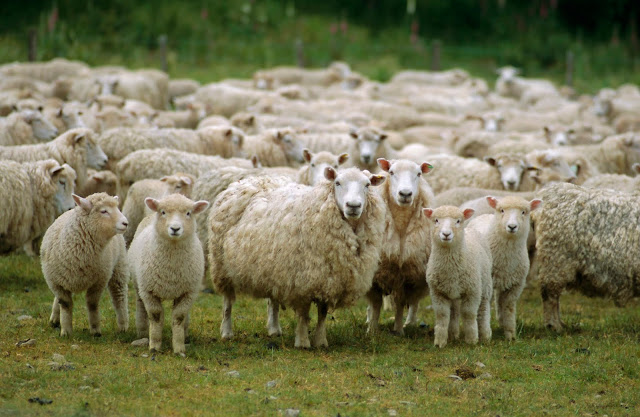 Sheep have been getting a lot of attention lately, and they've been thrown out as an insult at an increasing rate.

We're sheep if we wear a mask.

We're sheep if we don't.

We're sheep if we listen to Fox News.

We're sheep if we believe there was fraud in the election.

We're sheep if we believe there was no fraud in the election.

Both sides are convinced that the other is composed of brainwashed sheep, and the divide is continuing to get wider and wider.  Even and especially among those calling themselves Christian.

It's easier to understand why sheep are used as an insult.  They are dumb animals.  They have poor depth perception, are easy to flee and panic, and their flocking behavior can make them liable to follow the first one that moves.  They can become bogged down and trapped by the weight of their own wool, repeatedly trap themselves in the exact same way, and follow the example of other sheep with no reason.

Sheep are defenseless.
Sheep need help to get up.
Sheep have no sense of direction.
Sheep are not meant to carry burdens.
Sheep cannot care for themselves when wounded.
Sheep will settle for less.

They are dumb animals.

But still, it is really surprising to see so many Christians using sheep as an insult.  Particularly as the Bible is very clear that we are all sheep.  (And that we would rather be sheep than goats, but that's a whole other sermon.)

"I am the good shepherd.  I know my own and my own know me, just as the Father knows me and I know the Father; and I lay down my life for the sheep.  And I have other sheep that are not of this fold.  I must bring them also, and they will listen to my voice.  So there will be one flock, one shepherd."

There are several instances in the Bible where God's people, both Israel and Christ's followers are compared to sheep.  Many have their roots in Psalm 23, in which David identifies himself as a sheep.  "The Lord is my shepherd."  We're sheep for many of the same reasons identified above.

We are spiritually defenseless.
We need help getting up when we are down.
We have no sense of eternal direction.
We aren't meant to carry the burdens we sometimes face.
We cannot spiritually care for ourselves.
We'll settle for the temporal, at the expense of the eternal.

We are dumb creatures.

And yet, Christ's response is one of care, not derision.  He is our Good Shepherd.  He is our nurturer, our protector, our ever-present help in times of trouble. He is the door to the sheep pen, keeping out the wolves and thieves and robbers.  Keeping us in the fold.  He is the one who leaves the 99 to hunt down the 1.

I learned something this past weekend that I had never been taught before. The early church did not use the iconography of the crucifix.  Too recent, too painful, perhaps too close to the reality of what the crucifix did.  Instead, the imagery was focused on the Good Shepherd.  Jesus with a lamb resting across his shoulders.  Jesus with the shepherd's crook.

And to me, that really re-centers the focus of the Christian life.  Don't get me wrong, the crucifix is still powerful imagery and represents the greatest victory that we have.  There is, however, also a tendency to treat it as a one-time historical event, both in the life of Christ and in our lives.  It's too easy for us to leave Christ on the cross.  To stop at our salvation and not pursue sanctification - to just get "fire insurance" and that's it.  To treat Jesus as just Savior and not Lord.

Focusing on the Good Shepherd reminds us that He is still watching over us.  He is still guiding us and protecting us.  And that we are still required to be listening for His voice.  To follow His voice and His voice alone.  To go where the shepherd guides us and to graze there.   To lie down in good pastures, to drink still waters, to graze along the Paths of Righteousness.

It reminds us that the Good Shepherd is and should be a part of our daily lives.

That is worth the attention and focus.

So, perhaps, it's time that we as Christians stop maligning the sheep.  Time to embrace our role as sheep and time to focus on the Shepherd.

It's how we'll all get through this.