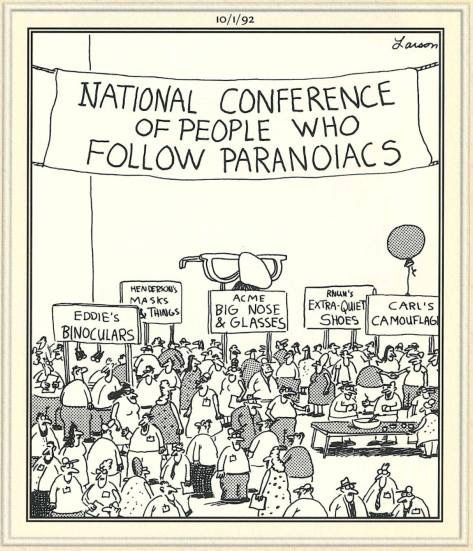 "Sometimes you have to look reality in the eye, and deny it."

Garrison Keillor
Trump derangement syndrome (TDS) is a pejorative term for criticism or negative reactions to United States President Donald Trump that are perceived to be irrational, and have little regard towards Trump's actual policy positions, or actions undertaken by his administration.  The idea that the opposition itself is deranged.  Coined in 2018, an extension of Bush Derangement Syndrome, it has been used by those on the right repeatedly to belittle and dismiss the concerns of those opposed to Trump's policies and character.
In the days since the election, I think we are seeing the real Trump Derangement Syndrome. A clinical delusion is defined as a belief that is clearly false and that indicates an abnormality in the affected person's content of thought.  As Trump continues to spiral out of control following his defeat, the depth of his delusion is being revealed.

I WON THIS ELECTION, BY A LOT!

At the time of this tweet, the election had not been called.  And as we have seen, this tweet has proven to be false.  And from all indications, it will remain false.

Despite Trump's continued allegations of fraud, there has not been any evidence of any significant fraud in the election which would have any impact on the results.  All of Trump's court cases that have been heard have been summarily dismissed, apart from the one in which he was granted a nominal victory (in PA ballots received post election day were segregated, which was already occurring).

The bigger issue that I'm seeing is the self-perpetuating delusion amongst his most fervent followers.  There are those for whom Trump is God.  His word is true and only his word.  And any source that disagrees with Trump, any platform that is unfair to Trump even in the slightest, is to be done away with.

Just look a the "faithful" moving from Fox News to One America News Network to NewsMax.  Fox had too many incidents of correcting Trump or speaking against him, so we can't listen to or believe them any more.  We'll keep looking for a new source that will prop up the delusion.  I can't tell you how many messages I saw on Facebook on election night claiming that NewsMax was the only source to get election results from for conservatives, particularly when Fox did the unthinkable and called Arizona for Biden.  Is that where we are, where Fox News is too liberal?

You can also see this in the new move of conservatives from Facebook and Twitter to Parler, the "free speech" social media platform. Or to MeWe, or whatever alternative you want to insert here.   In response to the 2016 election in which the big social media companies were accused of fostering mis- and dis-information, both platforms began fact checking and labeling posts as potentially misleading.  To many conservatives who have been spreading conspiracy theories and half-factual information, this has been seen as censorship.  And in response to this election, they are leaving and moving to Parler, the conservative platform.  Right now, that's definitely what it is, an echo chamber with the great majority of users being conservative and able to say whatever they want.  Isn’t that the definition of a “safe space”?

At what point when you believe that everything out there is misleading you, every news organization is corrupt, every social media platform is trying to silence your voice, every government official but Trump is lying to you and trying to enslave you, do you look around and say - maybe it's me?

Maybe I'm the one who's a little off base?

Maybe I'm being a little paranoid?

Maybe the guy I'm putting all my trust in me is the one who's lying - instead of everyone else?

At what point do we take a step back, relax, and realize that maybe not everyone is out to get us.  That maybe facts are facts, even when we don't like them.  That we need to hear opposing opinions and opposing positions to act as a gut check to our own.