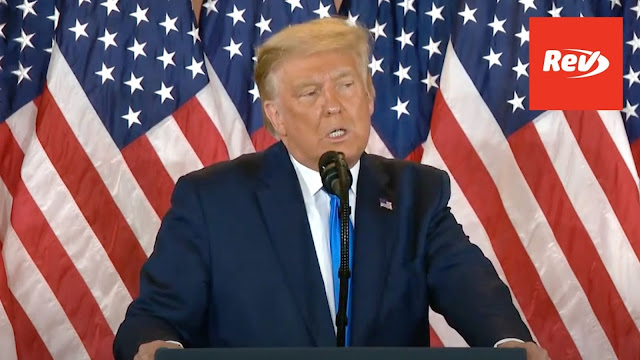 I am loathe to admit, but he did it.

He actually did it.

Trump accomplished something I did not think even he could do.

He has decidedly not won re-election.

We're still counting valid, properly cast ballots.  This is why every vote counts and every vote matters.  And while we're continuing to count, it's looking very possible that he will not win this election.

We can only hope.

No, Trump accomplished something more insidious, more impactful to our nation.  He has convinced his base, a great percentage of the American population that our election process is hopelessly rigged.  That this election is being stolen from him.  That he won, that he was ahead when it mattered, and everything now is just backdoor dealing.

He practically told us he was going to do it.  His intent to declare victory when he was ahead but before all votes were counted was made known last week.  It's still galling nonetheless.  Especially when you see him do it and follow the playbook exactly.

"This is a fraud on the American public. This is an embarrassment to our country. We were getting ready to win this election. Frankly, we did win this election. We did win this election. So our goal now is to ensure the integrity for the good of this nation. This is a very big moment. This is a major fraud in our nation. We want the law to be used in a proper manner. So we’ll be going to the US Supreme Court. We want all voting to stop. We don’t want them to find any ballots at four o’clock in the morning and add them to the list. Okay? It’s a very sad moment. To me this is a very sad moment and we will win this. And as far as I’m concerned, we already have won it."
Trump from his 2:30 am address, Wednesday, November 4, 2020

As of this morning, there are still as many as seven states that have not been called for either candidate. At this time, three states lean to Biden (Michigan, Arizona, and Nevada), four to Trump (Alaska, Georgia, North Carolina, and Pennsylvania).  If those specific states remain aligned with their current candidates, Biden wins the election 270 to 268 electoral college votes.  Biden is leading in the popular vote by nearly 3 million votes.  He currently has the record of the most votes received by a single candidate in American history at 70,401,268 votes.  There are reasons for hope that Biden will ultimately win this election.

This, of course, is troubling to Trump and his base.  And in Trump's mind, there has to be something improper about this result.  You can see it in his speech above.  They are relying on three different "frauds" that they have identified as the basis for this outcome.  First, they believe there are more votes in Wisconsin than actual registered voters.  Second, they believe that Democrats are somehow voting after election day.  And finally, they believe there are fraudulent dumps of documents that are being manufactured by Democrats in key states like Pennsylvania, Georgia, and Michigan.

These beliefs reveal a fundamental lack of understanding of our electoral process, of how votes are counted, of how states are "called" for a candidate, and when our elections are actually finalized.

First, the issue in Wisconsin relates to a fundamental misunderstanding regarding how our elections are managed.  There is no federal election process - our election is basically 51 different elections running in concert.  Each state runs their own election (plus D.C.), with sometimes entirely different rules and exceptions from state to state.  Wisconsin is a case in point.  It is one of the few states that allows for same day voter registration - meaning you can wait to both register to vote and then vote on Election Day.  This could explain a discrepancy in any random number picked out as the number of registered voters in Wisconsin from some past date compared to the number of votes cast.  But it's not even necessary here.  On November 1, there were over 3,600,000 registered voters in Wisconsin.  3,239,920 votes were cast.  Record participation, not an excess indicating fraud.

Second, no one is voting after election day.  Just because tabulation is continuing does not mean that people are continuing to vote.  Just because mail in votes are still allowed to be received in states like Pennsylvania does not mean people are able to vote today and have it sent it to be counted.  Any mail in ballots that are allowed to be received after Election Day still had to be post marked by election day.  Voting has ceased.  We still have to count them.  And we need to count every ballot - because the decision may be that tight this year in some states.

Finally and related - Democrats are not finding or manufacturing new pockets of data to swing the vote in their direction.  This is a natural result of the order in which votes were counted in those states.  In many states, early voting votes could not start being counted until Election Day.  In some instances, they could not be counted until polls closed on Election Day.  This often resulted in "day of" ballots being counted and reported first, with early and absentee ballots being counted and reported last.  This would explain the difference in states like Florida and Pennsylvania.  Florida was able to start counting its early ballots before election day and reported those early numbers first, with the in person, Election Day ballots following.  Since early voting went largely to Biden, but in person voting went largely to Trump, this caused a shift from blue to red early in the night.

Pennsylvania could only start processing and counting its absentee and early ballots at 7:00 am ET on Election Day.  Mail in ballots and absentee ballots take more time to confirm than day of votes.  The envelope has to be opened, the signature has to be matched with the one on file to the smallest degree, the vote has to be recorded, etc. etc. etc.  This has resulted in Pennsylvania only being able to count about 10,000 early votes an hour.  The Pennsylvania Secretary of State estimates there are a million such ballots remaining to be counted.  This is compounded with the fact that mail in ballots in Pennsylvania only needed to be postmarked by November 3, not received.  They can be received up to November 6, and still be counted.  This was an accommodation made for COVID-19 and the slowing of the USPS, which has so far been upheld by the United States Supreme Court.  These votes are heavily expected to favor Biden, given the locations in which they have been cast (largely areas like Philadelphia) and their mail-in status.  Both have heavily trended toward Biden.  For example, in the last reported set of such ballots, 80% were cast for Biden.  With the numbers remaining, this could result in a huge blue shift for Pennsylvania.  It just will likely be Friday before we know for certain.

This isn't the outcome anyone wanted, but it was the honest outcome most people expected.  Most people analyzing the race knew it would come down to a fight and knew it would likely not be decided on Election Night.  Election Night is a bit of a fiction that we tell ourselves anyway.  The final count of ballots has never been completed on Election Night.  It always takes time. Generally, states have been able to be called for a candidate, though, when the candidates lead could not substantially be affected by the remaining votes cast.  That's why statisticians were talking all night about what counties were remaining to be counted in a particular state, or about what they knew of regarding the source of the current vote count.  This year in particular, there was a greater reluctance to rely on polling information for predictions.  This is why Texas took so long to finally be called for Trump.  And props to Texas for making it as tight of a race as it was there.

What we are seeing is how the election process actually works.  How the count and confirmation actually works.  We shouldn't be surprised by this, but I guess we're too accustomed to the theater.

If Biden wins, he's not stealing an election from Trump.  Those states that are now leaning Trump and shift to Biden are not being taken away from Trump.  The vote is just accurately and completely being counted.

And that is something we all should want.  We want our votes to matter.  We want all votes to be counted.  Particularly in this election with record turnout (I'm seeing greatest in 120 years).  We want people to be able to trust in the system and continue this participation.

We don't need any candidate throwing a tantrum and deciding to stop counting when it favors him.  That's not how this works.  It's voter suppression, it's a crime, and it's part of a pattern he has engaged in.

So hang in there.  It might be a long week, but the process is working.