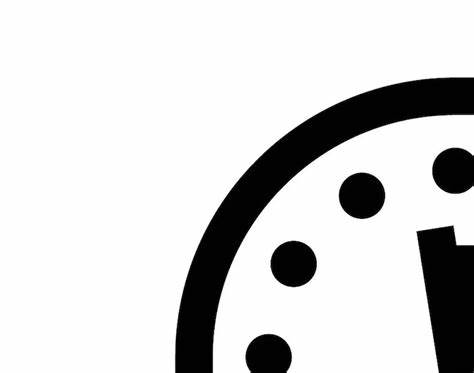 The Doomsday Clock has been moved closer to midnight.  We are now at 90 seconds to midnight, the closest it has ever been.  The clock was moved forward 10 seconds on Tuesday, largely due to Russia's threats of nuclear escalation in its invasion of Ukraine.

Created in 1947 by the Bulletin of Atomic Scientists, the clock does not definitively measure existential crises, but rather it is designed to foster communications about serious threats to humanity.  Originally this focused on nuclear destruction, but in 2007 it was updated to include climate change.  The farthest away from midnight was in 1991 at 17 minutes away.   As stated above, we are now at the closest we have ever been.

Perhaps it is just a larger reflection of society, but there is a general pessimism in the air and it's not uniquely an American sensation.  There is a lot of hopelessness out there right now and I'm not exactly sure how to combat it.

Are we as believers doing an effective job of conveying hope?  Or have we given up?  Are we just burying our heads in the sand, waiting for heaven?  Or worse, are we the ones that are the most hopeless, giving up on our country, our world and viewing them the most pessimistically of all?

We have to change this.  We as believers should be in the business of hope.  It should be overflowing out of us (Romans 15:13).  It is a fruit of the spirit that should be evident in our lives.  We should be spreading hope because we have hope in Jesus.  And not just a hope for the future, for heaven, but also a hope for today.

Let's move the clock back.

"Be joyful in hope, patient in affliction, and faithful in prayer." Romans 12:12