Where it's snowing, all winter through
That's where I want to be
Snowball throwing, that's what I'll do
How I'm longing to ski, through the snow 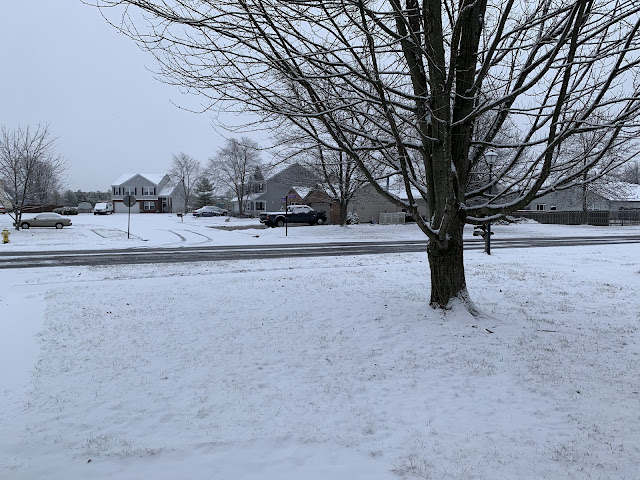 I don't think I will ever get tired of this.
The magic of waking up and the entire world being changed.  Covered in a blanket of white.  The newness and freshness that it represents. The wonder it brings.
They tell me that I will tire of snow.  That it will get routine and monotonous, but I just can't see it.
I'm still as excited as a new kid when this happens.  I'm just as bad as the kids, throwing open the windows and letting everyone know it is snowing or has snowed.
The picture above represents the first real snow of the year, which we woke up to yesterday morning.  It held on until after lunch, as long in the day as it could last, but the temperature just keeps coming up enough above freezing to make it melt.  You can only see a few traces that anything happened today.
Wednesday we'll be getting our first real winter storm.  This could bring us up to 9 inches of snow, lasting well into Thursday.    That will be a lot of fun.  That's where it really covers the ground and lets us sled on the big hill across from the school.
I'm still waiting for the solid month or so where temperatures stay just at or below freezing to keep it around for awhile.  It's happened in both 2021 and 2022, and we'll look forward to it this late winter.
And I think I'll look forward to it every year.
It's still magical - and I hope it remains so.
"The way a crow
Shook down on me
The dust of snow
From a hemlock tree
Has given my heart
A change of mood
And saved some part
Of a day I had rued."
Dust of Snow, Robert Frost, Miscellaneous Early Poems,  1920
Posted by Mitch at 3:11 PM