The Importance of Dates

Jamie and I make it a point to have at least one date night a month.  We'd love for it to be at least one night a week.  On the once a month schedule, it's usually a Friday night/most of the day Saturday where we just have a little time to ourselves.  The kids enjoying time with their grandparents and cousins.  And us getting to relax.  Getting to go out and watch a show.  Getting to stay in and watch something they can't see yet.  Going to eat somewhere they would turn their nose up to.  Keeping that honeymoon period alive.

This weekend, we got to watch BlacKkKlansman (which totally should have won Best Picture).  We got to have two great meals.  Brunch at Oscar Delta and our favorite local Italian at Napolis.  We got dressed up and went to see Anastasia at the Music Hall at Fair Park.

But most importantly, we got to spend time together.  To get to talk, without interruption.  To just relax and be present together.  It's much a much needed recharging, preparing us for all that's ahead.

Almost equally as important, I got to have a Daddy-Daughter Date with Avalyn Sunday afternoon.  We've had a handful of movie outings just the two of us, but most of our previous dates have been breakfasts.  When I'm not on the Sunday schedule for all three services, I would take Avalyn to breakfast while Jamie worked the first service and then we'd both attend the second.

This Sunday, though, Avalyn and I both got dressed up to go see Disney's The Little Mermaid at the Dallas Symphony Orchestra.  The Symphony played the score while the movie was shown on a large screen above them.  Jamie and I have seen Psycho and The Lord of The Rings: The Fellowship of the Ring this way, as well as several Looney Tunes shorts and Fantasia segments.

It was just an afternoon to invest in her.  She got to pick what music we listened to in the car (Mary Poppins Returns on the way, the original Mary Poppins on the way back).  She picked where we ate - Braums for both lunch before and an ice cream treat after the show.  She got to choose to walk to Klyde Warren Park after the show at the Meyerson to try to find the playground.

It was very clear that I was not the only dad who had the same idea at the show.  Several daddy-daughter dates, as well as mommy-daughter, mother-son, and full family outings.  And it was the perfect outing.  Something she's interested in.  Something that exposes her to something different, something more than she has seen.  To get to teach her about the symphony, to let her know I used to work for one, and especially for her to see a female conductor, to be able to see that as a possibility.

Both dates were absolutely worth it and I would not trade a minute of either of them.

But, both dates were also hard.

This is the crazy season for us, with Jamie rehearsing into the night getting ready for competition in a couple of weeks.  Work is ramping up and requiring a few more later stays in the office.  It's tough to even schedule a date night now.  We were all exhausted this past weekend and could have easily spent the days lounging around and just trying to catch up on rest and sleep.

I'm glad we didn't.  I'm glad to have those moments together with my wife and with my daughter.

I'm a firm believer that our most precious resource is time.  It's the one worth fighting for the most.  It's what motivates me.  I'm not motivated by more money or more things unless they afford me more time.   If you want to incentivize me, offer me more time with my family.  With friends.  More time to invest in those I've been blessed with and chosen to be around.

Time is one of the few resources we can never accumulate.  It's always running away from us.  So spend it and take it wisely.

Jamie and I didn't get our show selfie, but Avalyn and I did, so I'm thought I would close by including it here. 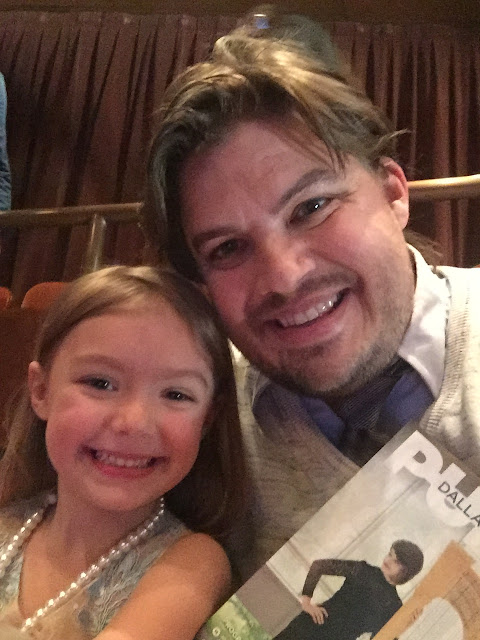 To many, many, many more dates, date-nights, daddy-daughter dates, and father-son outings.