When You Cannot Admit You Are Wrong

It is a skill that seems to be largely lacking of late.

Perhaps, we are in an epidemic of infallibility, as some have wrote.  Perhaps we are all just suffering from extreme narcissistic personality complexes.

Or, perhaps it is just one, very high profile individual.

The recent NOAA-Hurricane Dorian scandal seems to be a great exemplar of this problem.

In addition to Florida - South Carolina, North Carolina, Georgia, and Alabama, will most likely be hit (much) harder than anticipated. Looking like one of the largest hurricanes ever. Already category 5. BE CAREFUL! GOD BLESS EVERYONE!
— Donald J. Trump (@realDonaldTrump) September 1, 2019

The information provided was largely correct, apart from the inclusion of Alabama.  The National Weather Service of Birmingham had to followup with a correction just twenty minutes later.

Alabama will NOT see any impacts from #Dorian. We repeat, no impacts from Hurricane #Dorian will be felt across Alabama. The system will remain too far east. #alwx
— NWS Birmingham (@NWSBirmingham) September 1, 2019

Out president, undeterred, dug in his heels on his assertion.  Following an unrelated announcement, he reiterated his statement that the storm could have struck Alabama, with a weather map dated August 29, tracking the hurricane's path with an additional potential impact section added in black pen/marker.  "I know that Alabama was in the original forecast.  They thought it would get it." 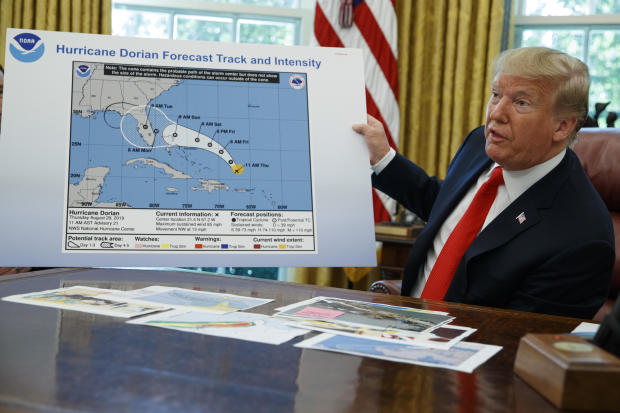 Mr. Trump continued to dig in his heels, and on September 7, 2019, NOAA appeared to backup the president's assertions.  In its released statement, "From Wednesday, August 28, through Monday, September 2, the information provided by NOAA and the National Hurricane Center to President Trump and the wider public demonstrated that tropical-storm-force winds from Hurricane Dorian could impact Alabama."

The National Weather Service Employees Organization would push back against this statement from NOAA.

Let me assure you the hard working employees of the NWS had nothing to do with the utterly disgusting and disingenuous tweet sent out by NOAA management tonight #NOAA
— Dan Sobien (@pres_nwseo) September 6, 2019

On September 9, 2019, Craig McLean, the chief scientist of NOAA released a letter indicating his intention to investigate potential violations of the scientific integrity of the NOAA based on the September 7, 2019 press release being "political" and a "danger to the public health and safety."   McLean argued the previous press released compromised trust in the integrity of the organization.  "If the public cannot trust our information, or we debase our forecaster's warnings and products, that specific danger arises."

By this week, the story has become more convoluted, with allegations of tampering.  A senior administration official told The Associated Press that White House chief of staff Mick Mulvaney told Commerce Secretary Wilbur Ross to have NOAA publicly disavow the position that Alabama was not at risk.  According to a New York Times report, the Commerce Secretary threatened firings of the NOAA political staff if the situation was not fixed, leading to NOAA's eventual press release later that day.  While Mulvaney was acting to help Trump, it is not clear whether Trump actually asked him to act.

The president, of course, has denied any involvement and called the story a hoax.

So we have a known exaggerator at best and liar at worst (whose misleading statement tally is up over 12,000 - and that's a month behind) and a team around him that is constantly enabling and protecting this behavior on one side, and a litany of scientist on the other.  I know which side I would tend to believe based on past experience.

But it raises the question - does the truth even matter anymore?  Are we really in a post-truth era?  After all, 39% of the country still supports the president no matter what news comes out about him.  He has been able to convince them that the very news is not trustworthy and that he is to be believed above all.

That is only one example of controversy from the past weeks.  We could also look at the investigation into events around Trump's resorts.  The investigation surrounds repeated military spending at Prestwick Airport, the closest airport to Turnberry, and into stays and spending at the Turnberry resort.

The military has spent $11 million on fuel at Prestwick Airport since October 2017, fuel that would be cheaper from a military base.  The airport has provided cut-rate rooms and free rounds of gold at Turnberry for select airline crews.  Early spring of 2019, an Air National Guard crew made a routine trip from the U.S. to Kuwait to deliver supplies, with unusual stops and stays both ways at the Turnberry resort.  This is apparently highly unusual as the crews have typically stayed at military bases.

"The crew were so confused by what was happening when they were rerouted to Scotland to refuel at this tiny airport outside of Trump Turnberry because they had never done that before in the fifty-plus trips they had taken to do these routine supply trips.  They didn't have enough money; their per diem allowance didn't even allow them to buy food or drinks there.  They felt totally out of place."  Natasha Betrand, who broke the story with Bryan Bender on The Rachel Maddow Show.

Combine this with Vice-President Pence's stay at the Trump National in Doonbeg, Ireland.  Pence was visiting Ireland for sit-downs with the countries leaders in Dublin. The resort in Doonbeg is 180 miles away from the locations of these talks.  A top aide for Pence, Marc Short, has indicated that Pence's stay was at the suggestion of the president.  According to State Department receipts, Pence's detour to Doonbeg cost taxpayers nearly $600,000 in ground transportation fees.

The president, of course, has denied involvement in either situation.

I know nothing about an Air Force plane landing at an airport (which I do not own and have nothing to do with) near Turnberry Resort (which I do own) in Scotland, and filling up with fuel, with the crew staying overnight at Turnberry (they have good taste!). NOTHING TO DO WITH ME
— Donald J. Trump (@realDonaldTrump) September 9, 2019

I had nothing to do with the decision of our great @VP Mike Pence to stay overnight at one of the Trump owned resorts in Doonbeg, Ireland. Mike’s family has lived in Doonbeg for many years, and he thought that during his very busy European visit, he would stop and see his family!
— Donald J. Trump (@realDonaldTrump) September 9, 2019

This seems very clearly the reason we have the emoluments clauses in the Constitution.  Why there has been an unwritten rule that presidents divest their private companies while in office or at least place them in a blind trust.  It seems like common sense, but perhaps it should have been codified.  As House Oversight and Reform Committee Chairman Elijah Cummings wrote, "The committee does not believe that U.S. taxpayer funds should not be used to personally enrich President Trump, his family, and his companies."

We all should feel that way.

When are we fed up with this denial of responsibility?

When are we tired of the constant enabling and protectionism of the people around him?

When do we hold him accountable?

At what point does the corruption, the con, the lies, and the narcissism outweigh whatever perceived good he may have done?

Shouldn't we expect a baseline level of maturity in our commander in chief?