"Too often, we judge other groups by their worst examples - while judging ourselves by our best intentions.  And this has strained our bonds of understanding and common purpose.
But Americans, I think, have a great advantage.  To renew our unity, we only need to remember our values.  We have never been held together by blood or background.  We are bound by things of the spirit - by shared commitments to common ideals."
President George W. Bush
We're doing our nightly reading through Joshua and we've finally gotten through the land division descriptions.  Last night, we read the last half of chapter 22, where the tribes of Gad, Reuben, and the half tribe of Manasseh return across the Jordan to the east side and the land they claimed.  When they got back across the river, they built an altar of imposing size at the edge of the Jordan.   At the sight of this, the rest of the tribes were convinced that these two and a half tribes had violated God's commands, as the altar for sacrifice should have been at Shiloh.  And because they were convinced that the two and a half tribes had done wrong, they were prepared to punish them.  "And when the people of Israel heard of it, the whole assembly of the people of Israel gathered at Shiloh to make war against them."
They were ready to go to war against their own kinsmen because of what they saw and what they thought they understood.
Thankfully, cooler heads prevailed, and they sent emissaries to the tribes of Gad, Reuben, and the half tribe of Manasseh to ask why the altar had been built.  They sent the son of the chief priest and ten chiefs, each a head of a tribe of Israel.  And when they asked the two and a half tribes east of the Jordan, they discovered that they completely misunderstood why those tribes built an altar.
The tribes of Gad, Reuben, and the half tribe of Manasseh had a vision of the future.  They foresaw a future division that would become an issue.  "No, but we did it from fear that in time to come your children might say to our children, 'What have you to do with the Lord, the God of Israel?  For the Lord has made the Jordan a boundary between us and you, you people of Reuben and people of Gad.  You have no portion in the Lord."  They foresaw a time when the people would forget their history, when they would forget why the two and a half tribes settled on the east side of the Jordan, and forget their tie to the rest of Israel.
The altar was built to be a reminder of that history.
You can imagine, this explanation, combined with the two and a half tribes assurances in "The Mighty One, God, the Lord! The Mighty One, God, the Lord!" three names of God used as a form of an extreme oath, put the relationship between the two parts of Israel, the two sides of the Jordan back right.
This story gives us a prime example of how we should proceed in circumstances of disagreement.  First and above all, we should seek understanding.  "The one who gives an answer before he listens - this is foolishness and disgrace for him."  Proverbs 18:13.  Before we ascribe intent, before we act as if someone else is in the wrong, we should seek to understand their perspective.
How can we as Christians presume someone else's intent?  How can we presume malice?
And yet, aren't we the first to do so?
Haven't we painted much of the rest of the world out to get us?  Democrats are out to destroy us.  Socialists are out to destroy America and Christians.  This faction is ruining Christianity.  That faction is persecuting us.
I love that quote from George Bush and have referred to it often.  Because it's true.  We grant ourselves and the groups we belong to all sorts of latitude because we know the intentions of those involved.  And yet, when we look at other groups, we presume their intent.  When it's someone we disagree with, we presume the worst intent.  And only evaluate the evidence that supports our position.
We're fracturing in America, we're on the verges of conflict because we presume the worst intents of others and will not seek understanding.
We as Christians should be the first ones seeking to break this cycle.  To extend grace.  To seek understanding.  Yes, to speak up and stand firm when someone's intent is un-Biblical, particularly with those who are claiming Christ's name.  But not to leap to that condemnation as the first step in conversation.
We should also be the first ones to acknowledge the malice, the ill intent, the recklessness in our own pasts.  To admit that our pasts are not as rosy as we would like to paint them.  To admit and recognize that we have been great recipients of grace and should likewise extend it.  To take the plank out of our own eye before even speaking.
We can and should do better.  If nothin else, let's at least follow Hanlon's razor, "Never attribute to malice that which is adequately explained by stupidity."
I hesitate a bit with Hanlon’s razor, as I don’t want us presuming stupidity either.  That plays into another into another problematic us versus them mentality in Christianity, the idea that we’re right and everyone else who does not share our particular variant of theological understanding, our particular eschatology, our particular hermeneutic is wrong.  a model that inflates our own intelligence over everyone else’s. Perhaps we should focus instead on one of the quotes from which it is derived. “Let us not attribute to malice and cruelty what may be referred to less criminal motives.”  Jane West, The Loyalists: An ahistorical Novel (1812).  In short, let us presume the best. 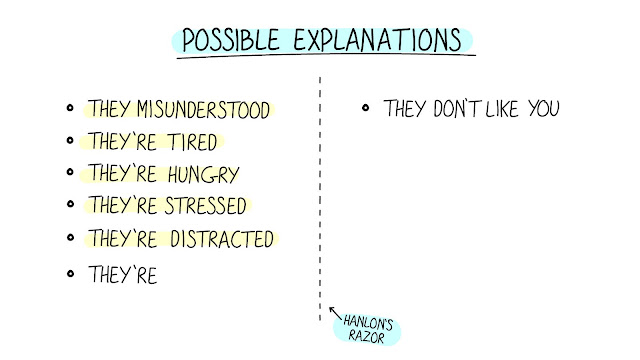 And if we want to presume intent or intelligence, let's take into account our own stupidity first.
Posted by Mitch at 3:22 PM

Email ThisBlogThis!Share to TwitterShare to FacebookShare to Pinterest
Labels: Grace