This May Be The Most Important Speech I've Ever Made... 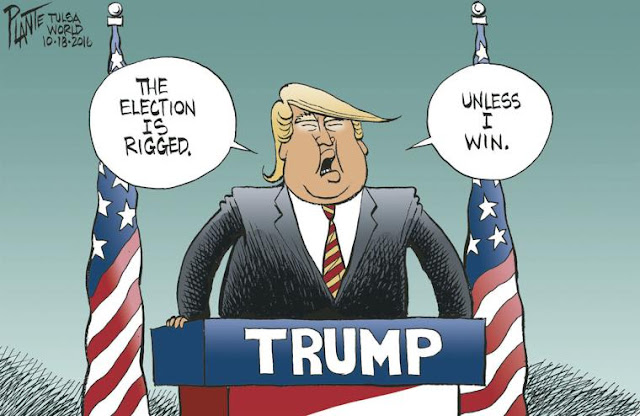 Those ten words are perhaps the truest thing President Donald J Trump has ever uttered.  While I'm loathe to perpetuate the mis- and dis-information contained in the video below, it provides important context for the discussion and the importance of the speech.

Because the importance of the speech lies not in the content itself, but in the context and its meaning.   Largely because the content is nothing new, it's the same allegations repeated again.  Shades of narcissistic personality disorder, where he cannot be wrong - reality cannot be right if he loses.  No, this is the speech of a person in power that has a game plan to keep that power, no matter the cost.

This is the start of a coup.

I'm really at a loss, as a cannot understand any other endgame here, if the president is not planning a coup.  In an hour long press conference the sitting president propagates accusation after accusation that has been repeatedly proven false, following litigation after litigation that the president's team has lost, all while refusing to raise more than a suspicion of evidence.

His only concrete evidence offered comes in the form of charts showing ballot "dumps" as he calls them, charts showing the progression of ballots counted.  The fact that two charts have huge swings at a specific time to him is suspect.

This is coming after his own Attorney General, William Barr, a man has been the staunchest of Trump's supporters and has enabled much of Trump's excesses,  acknowledged there was no evidence of widespread voter fraud that would impact the outcome of the election.  One must assume, Trump's speech comes in response to this reversal by the Attorney General.

This speech also follows the Cybersecurity and Infrastructure security agency declaring the 2020 election the most secure in American history.  Chris Krebs, a Trump appointee as the head of the Department of Homeland Security Cybersecurity division, was later fired for the remarks.

Also following Republican Senator Ron Johnson admitting candidly he knows Biden won, but that acknowledging it would be "political suicide" to oppose Trump.

Is that really where we are at - that we cannot acknowledge reality because of the fears of the whims of a mad king?  One who is threatening to defund the armed services through the NDAA if Twitter isn't punished by amending Section 230?

We really are in Act 5 of King Lear aren't we?  Or perhaps Macbeth is more appropriate?

Bart: Well, can't you see that's the last act of a desperate man?

Statement by Donald J. Trump, The President of the United States