I couldn't pass this one up. 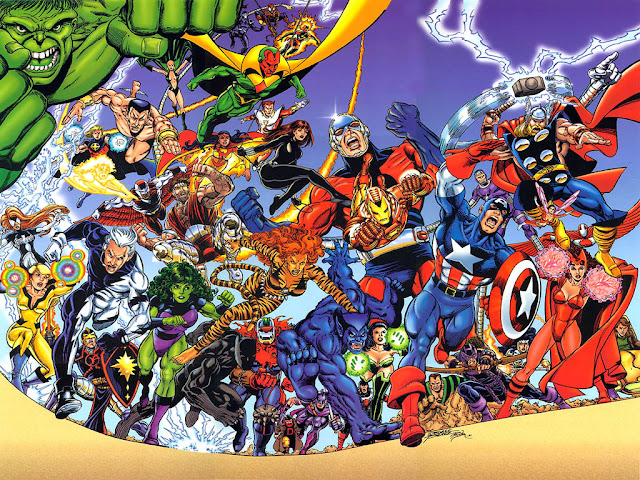 Today is National Superhero Day.  Created by Marvel Comics in 1995, it has become a day to celebrate our favorite heroes, both real and imagined.  As a life-long comic book fan, this makes today pretty special.
I still love superhero stories.  I love their power to convey simple and complex morality tales.  A place to retreat where we know that good will always triumph over evil.  No matter how dark it looks, no matter how much has been lost, right will prevail.

Superheroes are our modern myths.  They provide ideals that we aspire to and convey larger than life stories of struggle, triumph, perseverance, and hope.  Like any good science fiction, they are allegories through which the pressing issues of our times can be explored (Watergate in the original Secret Empire in Captain America, racism in Weird Fantasy #18 by EC Comics).

Plus, comics have an unlimited budget.  Movies are just now catching up, but comics can still beat them in terms of mind-blowing visuals.

And the end of the day, superheroes entertain me and inspire me.  I've read many bad ones, and I've read many excellent ones.  Those that have stuck with me throughout my life.  I've cut back on the number that I read and I am definitely enjoying being able to have them on a tablet (though I do miss the tactile feel of holding a comic book).  But I keep coming back and am looking forward to passing that love on.
I love that pop culture is just now starting to catch up with these myths.  If you had told me at 13 that there would be a different comic book inspired superhero television show on nearly every night of the week, that Marvel would be on track to release 35 big budget tentpoles for which it had creative control, that Comiccon would be as big of a pop-culture event as it has morphed into, I wouldn't have believed you.  It's a great time to be a fan.
It's also a great time to recognize the heroes around us.  The first responders that put their lives on the line for us and those that have increasingly difficult jobs with the pandemic and the civil unrest that have emerged.  The people that we have relied on for strength just to get through these trying times.
If you can say thank you to someone, it's time to do so.
So enjoy this superhero day.  Read a comic, watch a great superhero movie or show.  And thank someone who is being a hero each and every day.
Excelsior!
Posted by Mitch at 5:41 PM