Oscars, in the time of COVID-19 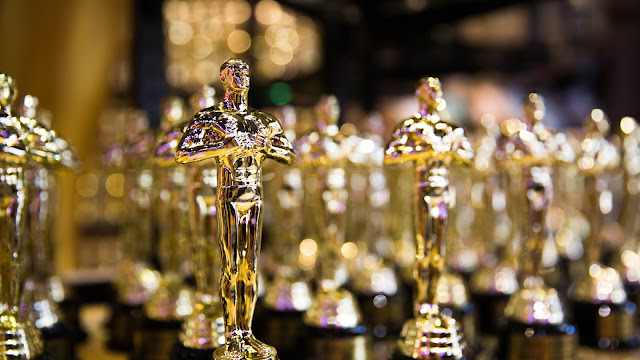 Sunday night marked the 93rd Academy Awards.  The ceremony was definitely impacted by the ongoing pandemic in more ways than one.  The location had changed from the traditional Dolby Theater in Hollywood to the Los Angeles Union Station.  A much smaller gathering of those nominated filled the limited space that they had, separated at tables by groups.  There were other "hubs" for Oscar nominees at theaters in locations like London for other nominees to be able to virtually appear from.  Still, several nominees were not able or comfortable attending at any location.

The production of the ceremony was likewise off.  They showed very few clips of the films that were nominated; those that were shown seemed random and sporadic.  There was no live orchestra, just QuestLove serving as DJ.  That meant no live scores, no live performance of the songs nominated, no live performance for the in memoriam montage.

For the third year, the show had no single host, just a passing of the baton from presenter to presenter.  This was particularly noticeable with the poorly conceived "name that tune" bit asking if songs had won the award, were nominated, or were neither.  Given how little the ceremony ran over time this year, had they cut the "name that tune" bit, it would have landed right on time.

Most curious, the order of the ceremony was completely upended.  Best Director, which is usually awarded closely before Best Picture at the end, was awarded first.  Best Picture was not the last category awarded, but rather followed by the acting awards.  Even there, they forwent the tradition of last year's best actress giving the Best Actor award and vice versa.  This year, the previous winner in each category gave the award for that category.

This last bit seems to have garnered the most attention and controversy.  It seems to many that they were building to the Best Actor award as the finale, expecting a posthumous award to Chadwick Boseman for Ma Rainey's Black Bottom.  Instead, Anthony Hopkins was awarded for The Father. Hopkins had not attended. He had asked to stream in from his home but was denied.  So, the Academy accepted the award on his behalf, causing the ceremony to close with a whimper.

I can’t subscribe to the rumor that the choice was deliberate, in the expectation of the posthumous award.  For one, there have been posthumous awards in the past and ones that have come so closely to the actor’s death that the impact was still being felt.  Heath Ledger’s posthumous award comes to mind.  And in those instances, the order of the proceedings was not altered.

The rumor I have heard and lend more credence to, is that Joaquin Phoenix was running late. In an ordinary ceremony, he would have presented the award for Best Actress.  With him running late and not being present, they would have delayed both the best actor categories, as they usually go in pairs. This would explain the seemingly rushed Rita Moreno presenting Best Picture early and the visibly uncomfortable Phoenix who completely eschewed the format that had been established for presenting.

A stage manager issue, as opposed to a producer issue.

The result made the Oscars incredibly underwhelming. The lack of real surprises , the unconventional format, the weird structure issues, all made the broadcast land with a thud in a way that it has not done so before.

The viewership numbers were not a surprise. The ceremony dropped below 10 million people for the first time in a long time, with viewership down 57% from the past year. This has led some conservative commentators to claim a Hollywood backlash finally paying off. As if America was finally done with Hollywood once and for all.

The reality is a lot more mundane.  Despite this years films being largely more accessible to the general public through early access video on demand and streaming platforms, the individual films nominated were not that well known.  Unless you were following the award seasons and buzz, it is very likely the average American would jot have heard of any of the nominated films, much less have seen them.

It’s a problem that has been plaguing the Oscars for years. Gone are the days when blockbuster films like Rocky or Star Wars are nominated for Best Picture. The films of today are still largely niche films primarily released in the late fall and early winter.  Oscar bait films. Until that changes, viewership of the ceremony will also remain a niche event.

I still wish they’d just embrace it. Lean into the niche aspect of it and make it a true celebration of Hollywood and film. Bring back a host that makes it an even longer and grander celebration. Own what it is.

Or at least do something interesting and make the Muppets the hosts, complete with running commentary by Statler and Waldorf.

Whatever it is, next years ceremony just can’t be this dull.