Truth, Justice, and a Better Tomorrow 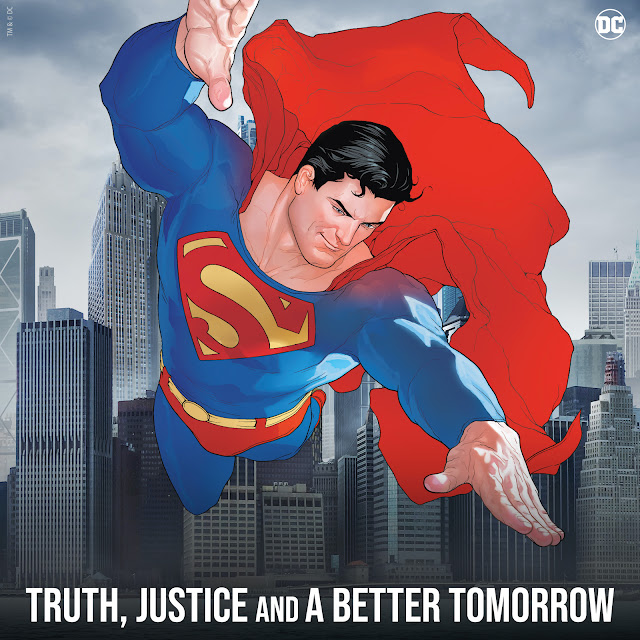 Superman's mission has changed.  This past Saturday, October 16, 2021, DC Comics announced at their DC Fandome event that Superman's long-standing mission for "truth, justice, and the American way" would be changing to better reflect the current world.

The new mission - a never-ending fight for truth, justice, and a better tomorrow.*

Moving Superman away from strictly an American icon and giving him back to the the world.  DC Comics has stated that the decision is meant “to better reflect the storylines that we are telling across DC and to honor Superman’s incredible legacy of over 80 years of building a better world.”

Unsurprisingly, like the reaction to the new Superman's recent coming out, the reaction has been mixed.  Many praising the decision for its inclusivity and broader scope.  Other's seeing it as one more anti-American sentiment.  Notably, former Superman Dean Cain expressed his disapproval to this as well.

To Cain and similar detractors, this is merely the latest in a series of ill-advised political moves seeking to pander to the left.  It would seem to reveal more of Cain's politics than DCs.

In truth, it reflects a long pattern of changes to the hero's motto and mission.  Dating back to his earliest appearances, Superman's mission has always included truth and justice.  You can find many instances of Superman's slogan only including these two items.  The award winning Fleischer theatrical animated shorts from the early 1940s only proclaimed a "never-ending battle for truth and justice."  Ironically, Dean Cain's Lois & Clark television program only included the "battle for truth and justice" part as well.

The American Way portion has come and gone a lot over the 80 year history of the character.  This tag line originated in a 1940s radio serial; but really came into prominence with the 1950 George Reeves television show.  The phrase was then dropped for the 1960s cartoon, but picked back up by Christopher Reeve in 1978's Superman film.

Not surprising, the phrases comes and goes as American patriotism (or nationalism, depending on your perspective) waxes and wanes.  With the current emphasis on diversity and inclusion that is in the zeitgeist, broadening Superman's mission makes sense.  Likewise, with the increasing globalization of our pop culture and the larger global audience for superhero comics, television, and film, a global mission makes sense.

Plus, Superman has always represented the best of us as humans, not just as Americans.  His core beliefs, his personality, his innate goodness would have come through regardless of what country he hailed from.  What nation he called home.

He's always been the "Man of Tomorrow."  Now his mission is aligned with that.

*I have had to add the Oxford comma myself.