What's So Funny About Truth, Justice, And The American Way?

Originally posted on December 6, 2019.  Re-posted for context around a couple of Superman conversations, both preceding and following this post.

DC Films still doesn’t know what to do with Superman, the studio reportedly is unsure how to make the character “relevant to modern audiences” https://t.co/ActQZp2O3t pic.twitter.com/EtxNICHvWT 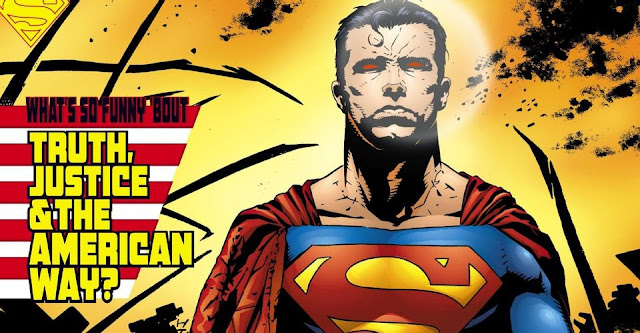 It started with a piece in Variety outlining the future of DC Films, the subdivision of Warner Brothers focused on the DC Comics characters.  It outlined plans for The Batman and discussed in depth plans for the upcoming R-rated features like The Suicide Squad and Birds of Prey, hot on the heels of the success of Joker.  But when it came to Superman, the piece confirmed what many of us have known for a long time - DC really doesn't understand Superman any more.

“The studio has less clarity on what to do with Superman, a character who has now been rebooted two different times in the last 13 years, […] without landing on a winning strategy.”

“To help find a way to make Superman relevant to modern audiences, studio brass has been polling lots of high-profile talent. “ Like J.J. Abrams and Michael B. Jordan.
Now, this will be harsh, but if you don't understand how to make a Superman movie, perhaps you are in the wrong business.  It you cannot find enough material to understand the character, then perhaps storytelling is not your strong suit.
Superman has been continuously published since 1939.  Eighty years of material waiting to be told on the big screen.
For the Man Who Has Everything
Whatever Happened to the Man of Tomorrow?
What's So Funny About Truth, Justice, and the American Way?

Superman: For All Seasons
All-Star Superman
Really, none of those could serve as an inspiration?!?

And the character isn't relevant?!?

It's hard to fathom not thinking an illegal immigrant raised in the Midwest who moves to the big city to become a journalist to fight corruption and an egomaniacal billionaire isn't relevant today.
Or that the original social justice warrior fighting corrupt politicians and slumlords isn't relevant, as he was presented in his original stories.
Warner Brothers hesitancy reveals a problem with sincerity, with hope, with optimism.  It's the Batman problem.  Everything to them is viewed through a Batman shaped lens.  Batman is gritty, Batman is edgy and dark.  Batman sells.  Ergo, in order for other things to be successful, they need to look like Batman.

You can see this problem in their most recent attempts at a Superman movie.  Man of Steel, while a solid sci-fi film, is a terrible Superman film.  Randian objectivism should not be allowed anywhere near a Superman film unless it is used as a contrast.  Superman should prove objectivism fatally wrong.  He must do what is right simply because it is right and for no other reason.  He protects, he saves those where he has no personal interest, no personal stake.  He will save everyone, or at least die trying.   Superman cannot stand by and let someone die if he has the power to save them, especially if the reason for inaction is to protect his identity.  That strikes against the very core of the character.

Likewise, Batman v Superman fails because it provides no contrast between the two characters.  In the film, we are shown no difference between Batman and Superman.  Two characters filmed through the same dark lenses, literally and metaphorically, battling each other because the plot requires it to be so.  And in Justice League, Superman is more of a plot device than an actual character in the film.  The adjustments to the film at least brought forth a few moments which showed what Henry Cavill might be able to do with the character under the right pen, but the disjointed production of that particular movie did no one any favors.

It's a puzzle why Warner Brothers has such a hard time with an appropriate tone for Superman.  Marvel's Captain America: The First Avenger, showed that an earnest approach to superhero film would work.  That character has formed the backbone of their MCU and has benefited from playing off the different personalities in that universe.

Likewise, a film like A Beautiful Day in the Neighborhood showcasing an optimistic hero and contrasting him with the cynical world is earning critical acclaim.  And while it is not burning up the box office charts, it has still recouped its costs, nearing $40 million in ticket sales.

We need Warner Brothers to get this right.  We need Superman again, as everything he stands for seems to be under attack.

But what is truth when unpopular realities can be dismissed as "fake news" or when documented record can simply be denied?  When the images we see must be evaluated for their level of manipulation?  When scripted dramas are passed off as reality television?  What is truth when feelings and opinions matter more than facts?

What is justice when it seems to be applied unevenly at best?  When the color of ones skin can be the difference in a business meeting in a coffee shop and an arrest at a coffee shop or between life and death in a traffic stop?  When antisemitic, white power, and alt-right groups are on the rise?  When the gender pay gap still exists?  When affluenza is a recognized condition?  What is justice if it is not blind?

What does the American Way mean anymore?  Whose American Way? Especially when our country is as fractured as it is.

Sadly, even the "reporter for a great metropolitan newspaper" part is going away in our society.  Under attack from declining sales and partisan politics alike.

Over time, Superman's character continued to solidify.  Powers and weaknesses came and went; some of them very, very strange.  But the core of the character remained.  Superman is honest, fair, and decent.  He is a paragon of virtue who knows and does what is right.  He is the strongest one their is, but uses that strength to protect only, not to intimidate or bully.  Strength with responsibility.

It's that character we need again.

We need that paragon, that beacon of hope to inspire us again.  The example that causes us to find a better way.