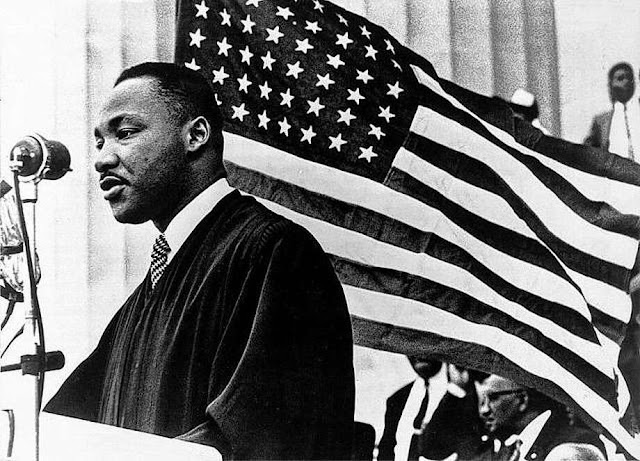 Today we set aside to recognize the contributions of a man to the cause of equality.  A recognition of the birthday of Martin Luther King, Jr. and his contributions to non-violent protest, equality, and the Civil Rights Movement of the 1950s and 1960s.
An ordained Baptist minister, you can see the inspiration he drew from the commands to love the Lord your God above all, to love your neighbor as yourself, and to love your enemies.  His call for non-violence from Jesus' instruction to turn the other cheek.
He serves as a reminder to us that we are all derived from one creator; that there is "neither Jew nor Gentile, neither slave nor free, nor is there male and female, for you are all one in Christ Jesus."  We could add to that list that there is neither black nor white.

And he reminds us that our founding documents declare that "all men are created equal" and it is our job to hold our country to that truth.

"There can be no gain saying of the fact that our nation has brought the world to an awe inspiring threshold of the future. We've built machines that think and instruments that peer into the unfathomable ranges of interstellar space. We have built gargantuan bridges to span the seas and gigantic buildings to kiss the skies. And through our spaceships we have penetrated oceanic depths and through our airplanes we have dwarfed distance and placed time in chains. This really is a dazzling picture of America's scientific and technological progress. But in spite of this something basic is missing. In spite of all of our scientific and technological progress we suffer from a kind of poverty of the spirit that stands in glaring contrast to all of our material abundance. This is the dilemma facing our nation and this is the dilemma to which we as clergymen and laymen must address ourselves. Henry David Thoreau said once something that still applies. In a very interesting dictum he talked about improved means to an unimproved end. This is a tragedy that somewhere along the way as a nation we have allowed the mean by which we live to outdistance the ends for which we live. And consequently we suffer from a spiritual and moral lag that must be redeemed if we are going to survive and maintain a moral stance.

And the words of Jesus are still applicable. What does it profit a generation, what does it profit a nation to own the whole world of means televisions, electric lights and automobiles and lose in the end the soul. The words of Jesus are still true in another sense. Man can not live by the bread of colored televisions alone but by every word, the word of justice, the word of love, the word of truth, every word that procedeth out of the mouth of God. And the problem is that all too many people in power are trying to get America to live on the wrong thing. And this is why we are moving in the wrong direction. This war is playing havoc with our domestic destinies for all of these reasons. We are fighting two wars today.

And so I say we need your support and we expect it as we move on into this area and I want to thank you for the support that so many of you have continually given. As we were marching today, some 5,000 strong, I thought about Selma because I could look around and see so many who have marched with us in Selma, and from Selma to Montgomery. And we are still marching and we are still moving. And I give you my commitment today that I plan to continue. Someone said to me not long ago, it was a member of the press, 'Dr. King, since you face so many criticisms and since you are going to hurt the budget of your organization, don't you feel that you should kind of change and fall in line with the Administration's policy. Aren't you hurting the civil rights movement and people who once respected you may lose respect for you because you're involved in this controversial issue in taking the stand against the war.' And I had to look with a deep understanding of why he raised the question and with no bitterness in my heart and say to that man, "I'm sorry sir, but you don't know me. I'm not a consensus leader.  I don't determine what is right and wrong by looking at the budget of the Southern Christian Leadership Conference or by taking....  Nor do I determine what is right and wrong by taking a Gallup poll of the majority opinion."  Ultimately a genuine leader is not a searcher of consensus but a molder of consensus.  On some positions cowardice asks the question, is it safe? Expediency asks the question, is it politic? Vanity asks the question, is it popular? But conscience asks the question, is it right? And there comes a time when one must take a position that is neither safe, nor politic, nor popular but he must take it because conscience tells him it is right."

Martin Luther King, Jr., A Proper Sense of Priorities, February 6, 1968
"In the end, we will remember not the words of our enemies, but the silence of our friends."
What good does it do us, what does it profit us today to remember the man, to post quotes from his life, if we are not actively working towards change?  Are we honoring his legacy if we pretend his struggle existed only in the past?
Since 1994, Martin Luther King, Jr. Day has been recognized as a day for service.  The only federal holiday to be a day on, not a day off, reflecting our responsibility to each other.  This Martin Luther King, Jr. day, may we be active supporters in the cause of justice, of mercy.  May we be taking positions because our conscience tells us that it is right.  May we truly be in service to all.
Posted by Mitch at 3:56 PM