The Best Men Can Be

Gillette released a new ad this week entitled "We Believe."  In the ad, they seek to challenge the image of masculinity that the company one promoted by calling out and exposing toxic masculinity.  Particularly in this post #MeToo era. The ad calls for men everywhere to step up, to be protectors, to be heroes, to be role models.  It ends with a change in Gillette's old slogan from "The Best A Man Can Get" to the new "The Best Men Can Be."


“Boys will be boys”? Isn’t it time we stopped excusing bad behavior? Re-think and take action by joining us at https://t.co/giHuGDEvlT. #TheBestMenCanBe pic.twitter.com/hhBL1XjFVo
— Gillette (@Gillette) January 14, 2019

It's a good ad. Actually, it's a great ad.  It goes to the core of the image Gillette previously presented and makes it relevant and inspiring for our time.

And apparently for some, that's a bad thing.

Hundreds of comments and replies to the Twitter post above and to the YouTube video that debuted the ad are decrying it, criticizing the tone of the ad, missing the point completely, accusing it of being an example of the worst forms of feminism, somehow.

As one comment put it,
"Gillette: *showing a video about how men can and should be better* 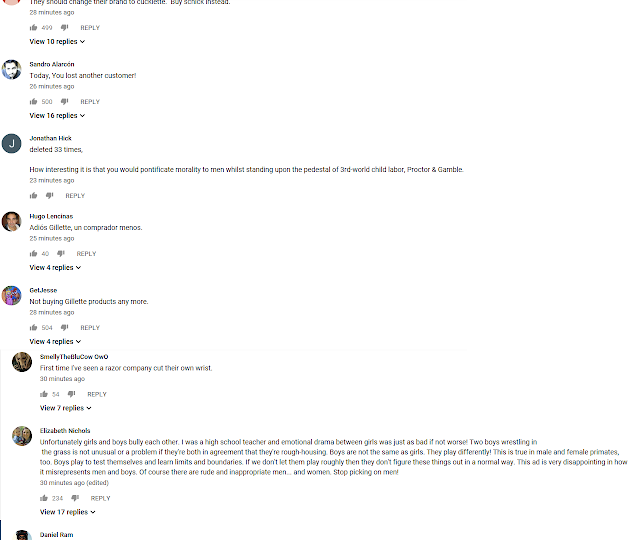 Are we that fragile as men that something like this offends us instead of inspiring us?  Are our egos that sensitive?  Or is it paranoia?

It's this kind of response that proves toxic masculinity.  Toxic masculinity refers to norms of accepted behaviors among men that are portrayed as good and natural but are, in reality, physically, socially, and psychologically damaging.  It's not just being male or masculine.  It's when masculinity requires one to be dominating, violent, sexually aggressive, self-reliant to the point of absurdity.  It's the kind of masculinity that hides and buries all feelings, that refuses to ask for help, that cannot show weakness of any kind.  That cannot be seen as "soft" or "feminine" in any form.  Cannot be nuturing.  Cannot be protective.  Cannot be caring.  Cannot emote publicly.  And its the kind that says that anyone who does not conform is not a "real" man.  The kind of masculinity that has messed us up since the dawn of time.

It's the kind of masculinity and thinking that says I "help out" with my kids instead of parent.  That I have "babysitting duty" instead of it being a natural part of the expectation of my experience as a father.  That acts as if a husband or a father doing laundry, housework, dishes, or cooking is somehow unique.  That my wife was "lucky," instead of those tasks being something that any functional human adult should be doing.

We can do better.  We should do and expect better.  Be the best we can be.

Because if the response to this ad is any indication - we have a long way to go.
Posted by Mitch at 12:00 PM

Email ThisBlogThis!Share to TwitterShare to FacebookShare to Pinterest
Labels: Ad campaign, Controversy, Gillette, The Best Men Can Be, Toxic Masculinity