In this edition of the If I Were Disney CEO series, I will be looking beyond the theme parks at the Disneyland Paris Resort and to the surrounding properties and experiences.  Similar to the previous posts for Disneyland in California and Walt Disney World in Florida.

To determine what could be added to the resort, it became important to understand how much land around the parks and hotels Disney owns.  And since Disney has assumed full control of EuroDisney SCA, this has become a little easier to track down.  The answer is actually surprising.  The area owned (or at least owned at one time) by Disney for Disneyland Paris is about a fifth of the size of Paris.  The image below simply identifies the easy to recognize, clearly Disney properties of the larger Disney parcel.  They include the parks, hotels, and Val d'Europe (a Celebration-like, master planned community) within the circle and then Disney Golf (the extension to the right in the image) and Davy Crockett ranch (campsites) and Villages Nature (a hotel, waterpark, and retail complex) at the very bottom of the extension.

With these boundaries in mind, it becomes easier to see what can be added to the property.  My intent is to address the Disney Village, an additional hotel, and the possibility of third park, before moving on to any additional opportunities in the property.

Disney Village:
The Disney Village (previously Festival Disney) is the Downtown Disney retail and dining area for Disneyland Paris. Like Disneyland in Anaheim, it also serves as a corridor connecting the parks to the hotels.  Originally just a single strip, Disney Village has now expanded to include an additional pathway with a grander World of Disney, cinema exit, Vapiano, and Five Guys.  The area now ends at the Dome du Disney Village, a circus tent inspired meeting space and the very utilitarian Disney Events Arena.

Thankfully, Disney Village is slated for a massive overhaul, starting with a renovation of the existing spaces and then moving into expansion, replacing the temporary Dome and Event Center.

Regarding reworking the existing facilities and tenants, I have a couple of suggestions.  With the new World of Disney, I would replace the older Disney Store, with a new tenant.  There is no need for two stores that serve the exact same function and there are other Disney owned stores like the Gallery, Disney Fashion, and the World of Toys that additionally sell Disney branded merchandise.

Second, I would take a hard look at attendance for the three themed restaurants in a row: Planet Hollywood, King Ludwigs, and Billy Bob's.  These three locations seem to be the most likely candidates for an overhaul. Billy Bob's at least offers a concert venue, so it may be the most likely to stay at least in some form, but Planet Hollywood is a declining franchise and King Ludwig's seems the oddest fit (burgers and German food in a very intricate medieval castle).  With this making up the restaurant row, essentially, it would benefit from a second look.

Finally, the best guess is that Buffalo Bill's Wild West Show with Mickey and Friends will get an overhaul, if not an outright replacement.  This is essentially a wild west version of Medieval Times, with stagecoach robbery, Pony Express, real Native Americans, rodeo cowboys, bison, longhorn cattle, and quarter horses.  It would be a shame to lose this show, but it would demand a look at revenue.  I would love to find a way to keep it.

Below in green, I've indicated the spaces for potential expansion.  I would definitely look to expand the space, particularly with a building across from World of Disney (the small parcel on the left).  This would potentially be tricky, as it would be on the roof over the trains, but this segment would go a long way in creating the impression of a true second corridor.  Likewise, to be able to expand beyond Five Guys on the bottom and beyond McDonald's on the top would greatly help create a sense of place, particularly if a nice pathway between the green and blue sections, creating a connection between Disney Village and the hotels. 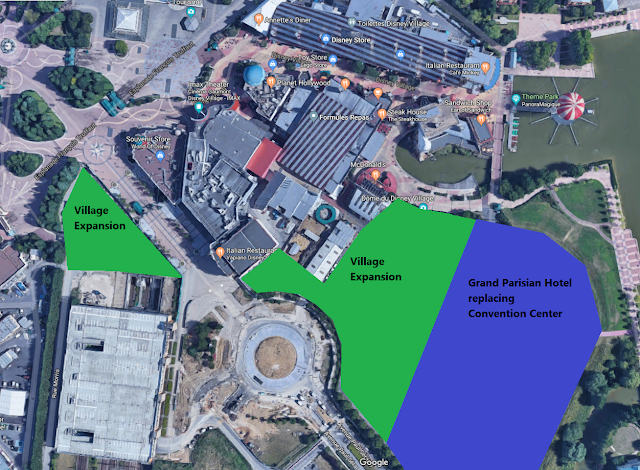 All hotels have been in existence since the opening of the resort.  And this proved to be the biggest problem of the property.  Disney opened a grand theme park within an hour's train ride of Paris, along with six hotels with around 5,765 hotel rooms.  A bit of overkill for opening day that would prove a terrible financial decision.  The hotels struggled to meet initially to meet expectations, but have increased in occupancy over the years since, peaking in 2008 at 90.9% occupancy.  Occupancy is now around 77%, a figure that has been affected by continuing renovations throughout the resort hotels.

While there is room for several additional hotels, there is only one that I would seek to add. I would look to fill out the last remaining hotel pad around Lac Buena Vista.  Here I would add Disney's Grand Parisian Hotel.  A Belle Epoque grand Parisian influenced hotel.  I could envision something very similar to the concept art for the unused Main Street Hotel.
To me, Disney has two distinct repeated hotel brands: the Disneyland Hotel and the Grand series.  The Disneyland Hotel traditionally has been repeated across Disney's international parks and follows the Hotel del Coronado, also used as inspiration for the Grand Floridian.   The Disneyland Hotel in Shanghai breaks this pattern, going for a Art Nouveau style, but it still fills the niche of a flagship resort hotel.

The Grand series has so far been composed of the Grand Californian, an Arts and Crafts flagship, and the Grand Floridian, again a Hotel del Coronado flagship.  With this pattern, the Grands celebrate the particular location of the resort with a specific architecture style.

Continuing the Vive la France! goal for the resort, I would love to see a hotel that is a celebration of Paris.  A beautiful Belle Epoque building and hotel in a premier location on Lac Buena Vista (as identified in blue in the image above re: Disney Village).

Third Park:
There is plenty of room for additional parks, and previously had been a promise for a third park as part of the land deal for the resort.  The potential date has been pushed back, and rightly so.  In fact, I am hesitant to even suggest a third park, but have come around to an interesting possibility.  The third park should not even be considered until park build outs are completed according to the previous two posts and the Disney Village renovation is complete.  But once those are done (or are sufficiently near completion), I would announce the third park:

The park would be a much greener park given the connection to nature and could be a fit to have a combination of Animal Kingdom and the Magic Kingdom.  A place for beautiful encounters with nature, both flora and fauna, though in an appropriately European or North American setting.

I envision the entrance to the park having the park gates situated to where you are exiting the castle gates.   This opening act or "Main Street," then, would be a medieval village that acts as the buffer between the castle and the forest. At the end of the village, the park icon, the weenie, would be a wooden castle, based on concept art for the Enchanted Forest.  This is a beautiful piece of art and a very unique castle style structure that I would love to see built.

If not this castle, I could also envision a version of the Pixie Dust Tree from Pixie Hollow (again, leaning a bit closer to Animal Kingdom).  The tree symbolizing the combination of magic and nature.
From there, I can envision lands based on Pixie Hollow, Tugley Wood (from Alice in Wonderland), the 100 Acre Wood, Sherwood Forest, Bambi, Pocahontas, the bayou from Princess and the Frog, the Forest of No Return, and the Dark Forest (a place for Mad Madam Mim's cottage, the Headless Horeseman, and perhaps even a decrepit castle ruins). It would be a place that could include Elysium Fields for Hercules and Fantasia.  A place for the Beastly Kingdomme concepts.  And could include live deer, live rabbits, etc. in animal encounters like in the Oasis at Animal Kingdom.

A unique park offering that still plays to the strengths of Disney storytelling and celebrates the beauty of European fairytales and folklore.

The planned location for the third park is past the Sequoia lodge.  This puts is removed from the other two parks, but creates unique opportunities.  The space, ostensibly, could contain a mirror of the two parks with just a slight modification of the bisecting road.  I'm not sure two additional parks will ever be necessary, but it may be good to leave the option open.  I've included a more central location, but the park could be pushed northward to accomplish that goal.

Either way, I would propose an extension of the Disney Village concept to lead from the space between the Sequoia Lodge and the Newport Beach Club to the new park(s).  This would also help provide a literal bridge over the road in between the spaces, allowing the Disney Village to build over the road (much like in Anaheim) creating a seamless walkway between the spaces.  This would also position the Sequoia Lodge and Newport Beach Club as the signature resort choices for the new park(s). 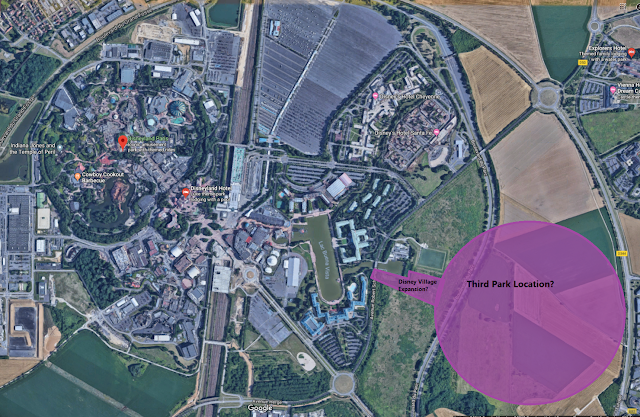 Beyond:
Beyond the parks, the Disney Village, and the hotels, it will be continually interesting to see how Disney develops the land of its resort.  The master-planned community and large shopping complex of Val d'Europe.  The Villages Nature resort with its mix of waterpark, retail and dining, and eco-tourism.  There is a lot of potential and I will be eager to see what develops.  My focus would be on getting the parks and resort area finances in better order through the steps outlined in the posts and above.

As always, thank you for reading.  For the next post, we'll be moving around the globe to Hong Kong Disneyland and the surrounding resort.
Posted by Mitch at 6:00 AM