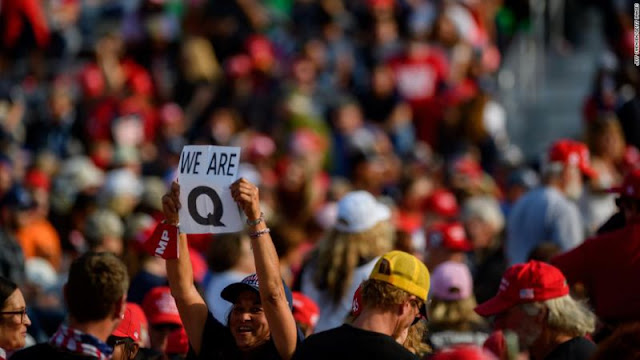 With Marjorie Taylor Greene, the QAnon aligned Representative from Georgia, having to defend herself today and to acknowledge the conspiracy theories she has peddled in her past, this seemed an appropriate time to post this reminder:

For those of you who are fortunate enough to have no idea what I'm referring to, Q is the pseudonym of a supposed "Q Clearance Patriot" who claims to be a US intelligence official leaking classified information.  The leaks began on 4Chan, one of the darker corners of the worldwide web on October 2017 and later moved to 8kun, an even darker hole, where it continued to promote a vast conspiracy theory largely centered around President Trump.  The movement became known as QAnon, and the messages from Q were labeled Q drops.  The conspiracy positioned Donald Trump as the lead combatant fighting a secret war against a global liberal cult of Satan-worshipping pedophiles.

QAnon commonly asserts that Trump has been planning a day of reckoning known as the "Storm", when thousands of members of the cabal will be arrested.  Q's supporters have accused many liberal Hollywood actors, Democratic politicians, and high-ranking government officials of being members of the cabal.  The conspiracy theories have been amplified by Russian state-backed troll accounts on social media, as well as Russian state-backed traditional media.
Q became a conservative Nostradamus with a track record for prophecy and revelation that is just as spotty.  Most centered around when the Storm would occur or when certain liberal or at least not conservative enough figures would be taken down.  Q continued to insist that Donald Trump would be re-inaugurated despite losing the election.  There are certain circles in the Q sphere that continue to spread that the Storm will happen in March and that's when Trump will be reinstated.
The scary impact of Q is the number of people that have bought into the lie.  Particularly within Christian circles.  Poll your contacts in particularly conservative evangelical circles and you would be surprised to find the number of people who have bought into some part of the Q and Q-adjacent conspiracies.
So, it's important to dispel them now and to call them out.
Q isn't real.
The world is not flat.
We really landed on the moon.
Vaccines don't cause autism.
9/11 happened and was not an inside job.
Sandy Hook and Parkland were not false flag events, they are tragedies.
Comet Ping Pong is a pizza restaurant and was not selling children.
Wayfair did not traffic children through the sale of office furniture.
Hillary Clinton and Barack Obama are not actual demons and do not smell of sulfur.
Michelle Obama was not born male.
Barack Obama was not born in Kenya.
George Soros was not a Nazi collaborator.
The Democratic party is not part of a massive international child sex-trafficking ring.
The Rothschild family are not the ringleaders of a Satanic cult.
The District of Columbia Organic Act of 1871 did not make the United States into a corporation that could be disbanded.
John F. Kennedy, Jr. is dead and did not fake his death.
There was not massive fraud in the 2020 election on a scale that would change the outcome of the election.  Joe Biden won the election because there were that many people who were fed up with Trump and/or wanted to promote Democratic principles.
COVID-19 is real.
5G doesn't cause COVID-19, Alzheimers, autism, infertility...
Q isn't real.
Stay sane out there my friends.  The dis- and mis-information is only going to continue to spread.
Posted by Mitch at 2:07 PM