“I moved past total bafflement to trying to be tolerant of people who may possibly not be Nazis, maybe. Dammit I can’t believe the word ‘Damn’ would get the book jettisoned out of schools on its own, but that’s really where the genuine focus seemed to be.”

“I think they’re so myopic in their focus and they’re so afraid of what’s implied and having to defend the decision to teach Maus as part of the curriculum that it led to this daffily myopic response.”

“It has the breath of autocracy and fascism about it. I’m still trying to figure out how this could be… I think of it as a harbinger of things to come.”
Art Spiegelman on the banning of Maus 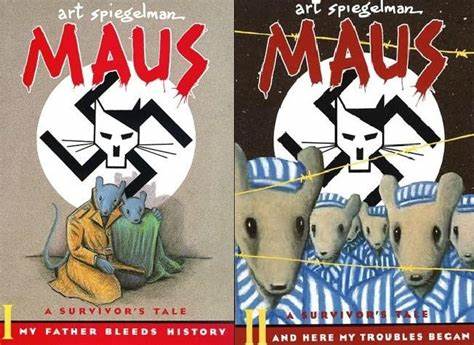 The seminal graphic novel Maus has been in the news a lot lately.  Usually, it's a cause for celebration when comics are being talked about to such a degree, but this time sadly, the attention comes from a moronically misguided decision by a Tennessee school board.  The McMinn County School board in Tennessee voted 10-0 in favor of banning the graphic novel from its schools.
Maus is not only widely regarded as one of the greatest graphic novels of all time, it is also considered one of the greatest books of the 20th century.   The novel, told in two parts, tells of author Art Spiegelman's father's experience as a Polish Jew during the Holocaust.  It tells the story through a bit of allegory, with mice representing the Jewish people, cats representing the Nazis, and ethnic Poles as pigs.  And the novel provides an unflinching portrayal of the horrors of the Holocaust.  A cartoonist by trade, Spiegelman preferred the comic form because it forced you to look.
Because it is an unsanitized account, the graphic novel does have eight mild curses and a small drawing of nude female mouse (a very small image of a mother in a bathtub having committed suicide by slitting her wrists).  The board cited the reasons, as well as mentions of murder, violence, and suicide as part of its decision. “The values of the county are understood. There is some rough, objectionable language in this book, and knowing that and hearing from many of you and discussing it, two or three of you came by my office to discuss that,” McMinn County Director of Schools Lee Parkison said during the board meeting.
"There's only one kind of people who would vote to ban Maus, whatever they are calling themselves these days."
Neil Gaiman, on Twitter in response
I shouldn't be surprised, but I always am.  This is just another part of the fear of education.  Make no mistake, there is a significant portion of us that is truly afraid of education.  Afraid of the power of education.  How it can affect people, how it can change them, how it can move us.  This is the same impetus behind the seditious parental voice in education laws, behind Iowa's proposal to add cameras to every school so parents can livestream their child's classroom.  It's behind the opposition to critical race theory, behind the Indiana laws requiring teachers not to comment on the morality of history or political positions, and to deny them the ability to ask a student's opinion on anything.
It denies that children have any independent value on their own.  They are merely an extension of their parents will.  And they are to be instructed in only what their parent wishes them to be instructed, so that they believe exactly as their parents believe.
A child cannot be allowed to have independent thought.  That would not do.  Because their mind might be changed.
To that end, teachers must be only babysitters.  They become extensions of the parent's in providing only the instruction on topics they agree to and with.  Children are clones to be programmed with that content.  And that content must be carefully screened.  Anything offensive, anything challenging, anything that doesn't fit the norm must be removed.
We know the truth, though.  History is never on the side of those who burn books.  They may have their time for a moment, but the truth will out.  And it would seem to be the definition of futility to ban books from a school library and curriculum when most of those kids have access to anything and everything in their pocket.  But then again, it's not about reality, it's about control.
It is a consolation that Maus has returned as the number one best seller on Amazon.  A nearby comic store in Knoxville offered to provide every student of the schools with a copy of the book.  More people are talking about Maus now, than they were just a few weeks ago.  And more people are talking about the Holocaust than they were a few weeks ago.

With that, maybe just maybe, we can learn from history.  And that can help keep us from repeating it.
“If you don't want a man unhappy politically, don't give him two sides to a question to worry him; give him one. Better yet, give him none. Let him forget there is such a thing as war. If the government is inefficient, top-heavy, and tax-mad, better it be all those than that people worry over it. Peace, Montag. Give the people contests they win by remembering the words to more popular songs or the names of state capitals or how much corn Iowa grew last year. Cram them full of noncombustible data, chock them so damned full of 'facts' they feel stuffed, but absolutely 'brilliant' with information. Then they'll feel they're thinking, they'll get a sense of motion without moving. And they'll be happy, because facts of that sort don't change.”
Ray Bradury, Farenheit 451
Posted by Mitch at 4:48 PM