"After all this had happened, Paul decided to go to Jerusalem, passing through Macedonia and Achaia. 'After I have been there,' he said, 'I must visit Rome also."
Acts 19:21
"Paul had decided to sail past Ephesus to avoid spending time in the province of Asia, for he was in a hurry to reach Jerusalem, if possible, by the day of Pentecost."
Acts 20:16
"And now, compelled by the Spirit, I am going to Jerusalem, not knowing what will happen to me there. I only know that in every city the Holy Spirit warns me that prison and hardships are facing me."
Acts 20:22-23
"After we had torn ourselves away from them, we put out to sea and sailed straight to Kos.  The next day we went to Rhodes and from there to Patara.  We found a ship crossing over to Phoenicia, went on board and set sail.  After sighting Cyprus and passing to the south of it, we sailed on to Syria.  We landed at Tyre, where our ship was to unload its cargo.  We sought out the disciples there and stayed with them seven days.  Through the Spirit they urged Paul not to go on to Jerusalem."
Acts 21:1-4
"Leaving the next day, we reached Caesarea and stayed at the house of Philip the evangelist, one of the Seve.  He had four unmarried daughters who prophesied.  After we had been there a number of days, a prophet named Agabus came down from Judea.  Coming over to us, he took Paul's belt, tied his own hands and feet with it and said, 'The Holy Spirit says, "In this way the Jewish leaders in Jerusalem will bind the owner of this belt and will hand him over to the Gentiles."'  When we heard this, we and the people there pleaded with Paul not to go up to Jerusalem.  Then Paul answered, 'Why are you weeping and breaking my heart?  I am ready not only to be bound, but also to die in Jerusalem for the name of the Lord Jesus.'  When he would not be dissuaded, we gave up and said, 'The Lord's will be done.'"
Acts 21:8-14 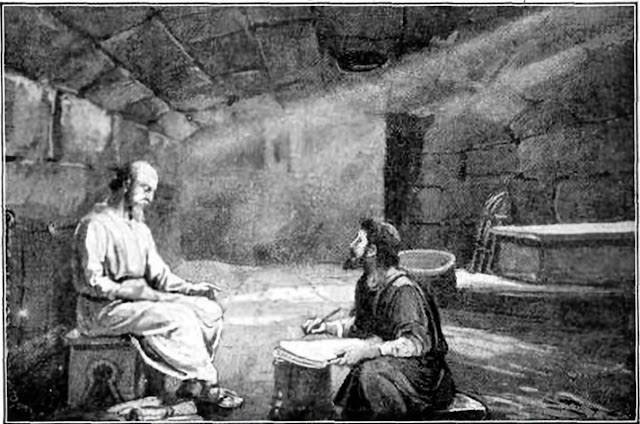 Continuing in our study of Acts, we come to the end of Paul's third missionary journey and read through a summary of the verses quoted from Acts 21.  This section continues to fascinate me.
There is an interpretation of these events that reads as if Paul disobeyed the Holy Spirit by proceeding on to Jerusalem despite an instruction not to and a warning of the consequences.
In reading commentaries, Paul's saintliness is so lauded that the commentator's cannot begin to believe that Paul would have erred.  An unwillingness to attribute any fault to him.  We see this in how many churches also treat Paul.  I continue to assert there are denominations that should more appropriately be called Paulists over Christians because of the inappropriate weight they place on Paul's letters.
Reading Matthew Henry's commentary, the directive in verse 4 is not mentioned, the warning is seen just a a preview of what awaits him, and the urging by his friends after Agabus' prophecy is seen as misguided and misplaced.  "But we see in them the infirmity incident to us all; when we see trouble at a distance, and have only a general notice of it, we can make light of it; but when it comes near we begin to shrink and draw back."  I believe this conclusion comes at the exclusion of the whole passage.
From a more contextual reading, I see Paul slipping into a very real danger Christians face in fervent service to the Lord - letting their own desires rush the general plan of the Lord ahead of his time table.  This was Abraham's problem in trying to rush God's promise, leading to the birth of Ishmael and a competing nation to that of Israel.
I see a similar pattern here in Paul. From chapters 19 and 20, we see that Paul had been led by the Spirit to proceed to Jerusalem.  This seems a general directive, a general direction Paul is to be traveling.  And God does give us these directions.  General parameters of where we are supposed to be moving.  Go to "the land that I will show you."
We also see that Paul had a great internal desire to get to Jerusalem as quickly as possible.  He wanted to get there by Pentecost.  We perhaps see the reason behind this desire in Romans 9:1-5.
"I speak the truth in Christ - I am not lying, my conscience confirms it through the Holy Spirit - I have a great sorrow and anguish in my heart.  For I could wish that I myself were cursed and cut off from Christ for the sake of my people, those of my own raise, the people of Israel.  Theirs is the adoption to sonship; theirs is the divine glory, the covenants, the receiving of the law, the temple worship and the promises.  Theirs are the patriarchs, and from them is traced the human ancestry of the Messiah, who is God over all, forever praised! Amen."
Paul had a great desire to be back among his people, the Jews.  Though he knew and was fulfilling his mission among the Gentiles, he longed to be back home.
Perhaps he was also desiring a great audience.  We know that Pentecost for the Jews was an important festival that included a pilgrimage.  It meant that there would be a great number of people in the city and the temple, just as there were when the Holy Spirit first came on the believers.
And from my reading, it seems possible that Paul used God's general direction, for him to go to Jerusalem, to accelerate that time table.  He sailed past Ephesus, missing another stop there and avoiding spending time in the Asian province.  Not wanting to chance another tense encounter.  And perhaps it's this rushing that leads to the Spirit's warning.
For the disciples in Tyre to warn him through the Spirit not to go to Jerusalem.  Luke makes a point to record that this warning was coming through the Holy Spirit, not from the disciples' personal affection.  And the language used was emphatic.  They were exclaiming to Paul through the Spirit "Do NOT go to Jerusalem!"  To Paul's general directive, this was a specific instruction.  While he may be needing to move toward Jerusalem, now is not the exact time to go.
But Paul pressed on.
Because of this Paul gets a second warning, a stronger, visual warning.  This time reminding him what awaits him in Jerusalem.  Imprisonment at the hands of the Gentiles.  And Paul responds to this with what can be seen as a very noble and pious statement.  That he is ready to die for the cause of Christ.
The problem occurs, though, when you are placing yourself in a position to die for Christ where Christ himself is calling you to live for Him.
We see from the whole context that Paul was always going to end up in chains and imprisoned, but what if his lack of heed to the Spirit's direction caused him to be imprisoned earlier than he should have been?  Perhaps he did not need to be a prisoner at all, as we'll see in later chapters how it is Paul's specific assertions that keep him in the court system when he could have been freed.
Should he have spent more time in Asia and on his missionary journey instead of rushing to Jerusalem?  Would we have more letters and more guidance from his time with those groups of believers?

That is the great unknown.
But we do get a warning regarding running ahead of the Holy Spirit.  Regarding putting our own desires ahead of the specific direction of God.  Regardless of how noble the intention.
And from his prison letters to Corinth, to Ephesus, and to Phillipi, we see the grace of God.  To be able to take our mistakes and to make beautiful art with them.  To advance His kingdom and purpose.
Lord, I pray to follow Your direction and to not let the desires of my heart influence my steps in that way.  To not fool myself to believe my desires are noble, but to follow the letter of Your word.  Continue to move me and shape me as needed.
For further reading, I recommend Paul's Mistake, by Ray Stedman.
Posted by Mitch at 3:21 PM