"It was now about noon, and darkness came over the whole land until three in the afternoon, for the sun stopped shining. And the curtain of the temple was torn in two.  Jesus called out with a loud voice, “Father, into your hands I commit my spirit.” When he had said this, he breathed his last.

The centurion, seeing what had happened, praised God and said, “Surely this was a righteous man.” When all the people who had gathered to witness this sight saw what took place, they beat their breasts and went away.  But all those who knew him, including the women who had followed him from Galilee, stood at a distance, watching these things.
The Burial of Jesus

Now there was a man named Joseph, a member of the Council, a good and upright man, who had not consented to their decision and action. He came from the Judean town of Arimathea, and he himself was waiting for the kingdom of God.  Going to Pilate, he asked for Jesus’ body.  Then he took it down, wrapped it in linen cloth and placed it in a tomb cut in the rock, one in which no one had yet been laid.  It was Preparation Day, and the Sabbath was about to begin.
The women who had come with Jesus from Galilee followed Joseph and saw the tomb and how his body was laid in it.  Then they went home and prepared spices and perfumes. But they rested on the Sabbath in obedience to the commandment." 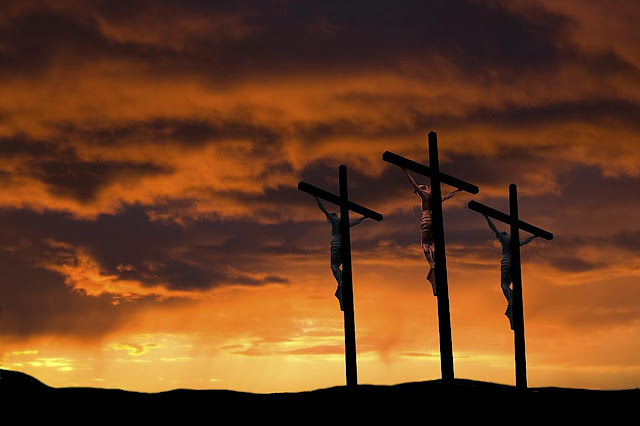 Today, for those of faith, represents the darkest day in human history.  The day where it seemed all hope died.  Good Friday remembers the day when Jesus Christ, Son of God, was crucified by the Roman government and died a criminal's death.

He suffered through the mockery of a trial, in which the prosecution presented trumped up charges to a judge who found no fault but still sided with the mob and gave into their demands.  He was beaten, tortured, and jeered.  Stripped and dressed in a costume designed to mock the charges against him.  He was forced to carry the beam of his cross in a walk of shame through the city where the same people who cheered his arrival now gawked at the parade of criminals as they worked their way to the site of their execution.  He was then nailed to that beam, in both his hands and feet, raised between two criminals and left to die.

Crucifixion was one of the most cruel forms of death that humans have ever created.  It was public and designed to dissuade its witnesses from perpetrating similar crimes.  Victims were sometimes left on display after death as a warning to any other potential criminals.  The death it provided was particularly slow and painful, leading to the term excruciating, or literally "out of crucifying."  The person executed was usually attached to the cross by a range of methods including rope and nails.  The executed could be tied to the cross such that the ropes would cut into his skin.  To support the weight of a body, nails would be driven into the arm just above the wrist, between the two bones of the forearm.  Nails would also be driven into the feet, also to support the weight of the body, usually without the foot-rest or the seat that is placed on our decorative crosses.  The entire weight of the body would be placed on those nails as the body would continue to pull downward in gravity, keeping the person in continual pain.

When the whole body weight was supported by stretched out arms, nailed to that cross, the typical cause of death was asphyxiation.  The executed would have severe difficulty inhaling and would have to draw themselves up by the arms, leading to exhaustion and pain at the nail sites.  This process could be sped up by the soldiers breaking the condemned's legs, preventing them from pushing up, leaving them to die choking for air.  The executed could further suffer cardiac rupture, heart failure, hypovolemic shock, sepsis, acidosis, arrhythmia, and pulmonary embolism.  The scourging before the crucifixion would exacerbate the potential for sepsis.  Add in dehydration and you have a slow, agonizing death on display for all to see.

And Jesus willingly chose that path.  He was led as a lamb to the slaughter, willingly going to cross to redeem his creation.

To his followers, this day marked a feeling of hopelessness.  It was the day hope died.  Their hope in change for the future.  The possible hope for revolution.  They saw everything they had hoped for vanishing in an instant.

For Jesus, this was also an unprecedented day.  The day when Jesus, the pure, spotless lamb would bear the sins of the world, past, present, and future.  It would be the one time Jesus was completely separated from His Father.  Where God would turn His back on him, for he could not see his son stained with sin.  Eloi; Eloi; Lama; Sabachtha.  My God; My God; Why have you forsaken me?

Many of us today on this Good Friday might be experiencing despair.  Might be feeling hopeless.  The physical isolation.  The loss of a job.  The loss of income.  This might indeed be the darkest night.

But we - we know dawn is coming.  We celebrate that Friday is not the end of the story.  Things may look at their absolute darkest, but morning is coming.  Friday may be death, but Sunday is resurrection.

No matter the outlook, it gets better.

It's Friday, but Sunday is coming!

Praise the Lord!
Today He who hung the earth upon the waters is hung upon the Cross.
He who is King of the angels is arrayed in a crown of thorns.
He who wraps the Heavens in clouds is wrapped in the purple of mockery.
He who in Jordan set Adam free receives blows upon His face.
The Bridegroom of the Church is transfixed with nails.
The Son of the Virgin is pierced with a spear.
We venerate Thy Passion, O Chris.
Show us also Thy glorious Resurrection.
Posted by Mitch at 1:49 PM