Jesus entered the temple courts and drove out all who were buying and selling there. He overturned the tables of the money changers and the benches of those selling doves.  “It is written,” he said to them, “‘My house will be called a house of prayer,’but you are making it ‘a den of robbers.’”

The blind and the lame came to him at the temple, and he healed them.  But when the chief priests and the teachers of the law saw the wonderful things he did and the children shouting in the temple courts, “Hosanna to the Son of David,” they were indignant.

“Do you hear what these children are saying?” they asked him.

“‘From the lips of children and infants
you, Lord, have called forth your praise’?”

And he left them and went out of the city to Bethany, where he spent the night.

Early in the morning, as Jesus was on his way back to the city, he was hungry.  Seeing a fig tree by the road, he went up to it but found nothing on it except leaves. Then he said to it, “May you never bear fruit again!” Immediately the tree withered.

When the disciples saw this, they were amazed. “How did the fig tree wither so quickly?” they asked.

Jesus replied, “Truly I tell you, if you have faith and do not doubt, not only can you do what was done to the fig tree, but also you can say to this mountain, ‘Go, throw yourself into the sea,’ and it will be done.  If you believe, you will receive whatever you ask for in prayer.”

Jesus entered the temple courts, and, while he was teaching, the chief priests and the elders of the people came to him. “By what authority are you doing these things?” they asked. “And who gave you this authority?”

Jesus replied, “I will also ask you one question. If you answer me, I will tell you by what authority I am doing these things.  John’s baptism—where did it come from? Was it from heaven, or of human origin?”

They discussed it among themselves and said, “If we say, ‘From heaven,’ he will ask, ‘Then why didn’t you believe him?’  But if we say, ‘Of human origin’—we are afraid of the people, for they all hold that John was a prophet.”

So they answered Jesus, “We don’t know.”
Then he said, “Neither will I tell you by what authority I am doing these things."
Matthew 21:12-27 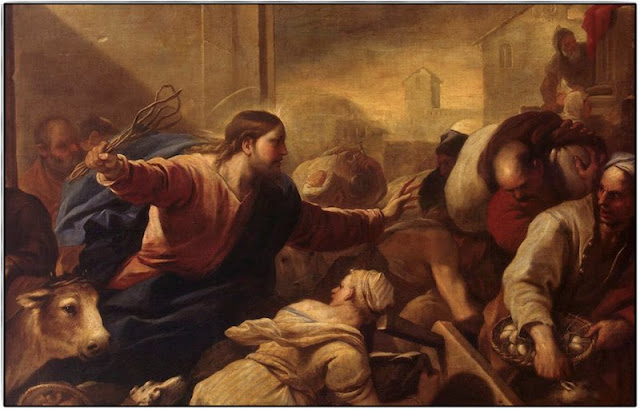 On the first day after Jesus's triumphal entry, we have a couple of interesting events:  the cursing of the fig tree and Jesus cleansing of the temple.  The combination of the two events, leads then to the chief priests and elders questioning of Jesus's authority.
The events are interesting because of their intertwined nature.  The fig tree was a symbol of Israel as seen in the works of Hosea and Jeremiah, and the age of the Messiah is seen as one where everyone would sit under their own fig tree without fear in Micah.  The cursing of the barren fig tree is seen as being directed at the Jewish people who have refused to accept their Messiah.
And so our question in this story, is are we part of those that are still refusing to accept?  Would we be part of the ones cursed for our continued lack of reception?
With the cleansing of the Temple, the sellers and money changers had set up in the area reserved for those outside the faith to come to temple.  They were literally blocking the access of non-Jews to the temple of the Lord.  The area was filled with livestock and merchants and money changers.  Selling animals and wares necessary for the sacrifice, and then exchanging money into the accepted currencies for paying taxes.  This was making worship a business for the faithful and blocking the seeking to be able to come in.
My favorite detail in this story in found in the gospel of John, where it states that he took the time to braid a whip and then cleared the temple.  I think I've often heard it portrayed as an almost impulsive act, one where Jesus saw what the Temple had become, particularly at this time where there would be hundreds of thousands there to worship at such a great festival, that he then started flipping tables.  But with the single statement that he braided a whip, it indicates that this was not due to an overcoming of emotion, but a premeditated act.  It was deliberate and purposeful.  It was to cleanse his father's house.
How often are we trying to set up the tables that the Lord has already flipped over?  How many of your churches have spaces of commerce inside them?  Are they remaining a service or are they overwhelming the space?
In particular to the cleansing of the Temple, we see the chief priests and the elders question Jesus's authority for his actions.  We see that in some way, the cleansing of the Temple is likely the catalyst for the events that will occur later in the week.  Jesus sidesteps their question beautifully as he has done before, but their inner monologue reveals the fear of the crowd he has gathered.
Jesus knew this, he knew this event might be the catalyst for all of the suffering that he would endure, and he did it anyway.
I pray that we can cleanse out the parts of our "religion" that are incompatible with the Gospel.  The traditions we hold onto as if they are essential.  The tables we've set up in the temple.  I pray in this Holy Week, we can experience that cleansing and start this resurrection season renewed.
Grant, we beseech thee, almighty God, that we, who are in so many occasions of adversity, by reason of or frailty are found wanting, may yet, through the passion and intercession of thine only begotten Son, be continually refreshed; who liveth and reigneth with thee, in the unity of the Holy Spirit, world without end. Amen.
Posted by Mitch at 6:24 PM

Email ThisBlogThis!Share to TwitterShare to FacebookShare to Pinterest
Labels: 2022, Easter, Faith, Holy Monday, Holy Week, The Cleansing of the Temple