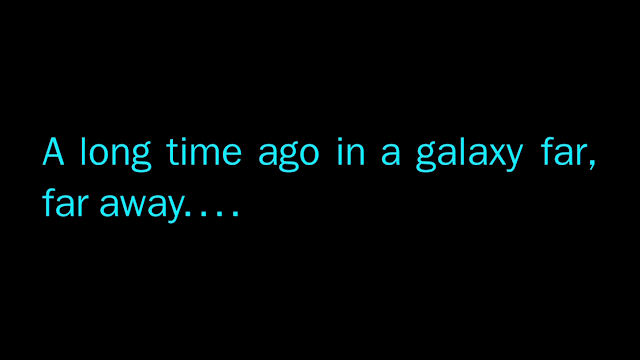 If you traveled back 45 years, little could anyone imagine how big Star Wars would become.  At that time, Star Wars was just a movie that was set to premier 20 days later.  Given the recent performance of sci-fi at the time, it wasn't expected to have much of an impact.

And yet, here we are, with Star Wars a global phenomenon.  A multi-billion dollar, multi-media franchise.  Star Wars land, aka Galaxy's Edge, has finally opened.  Jediism is even a registered and recognized religion.

Yes, the movies can be clunky, they can be corny, they don't always work that well.  But there is still a magic in them.  Particularly in the original trilogy.  Lucas stayed so close to the mono-myth, to Campbell's Hero's Journey, that he created a new mythology that still resonates today.

We still connect to hope.  We still want to see good triumph over evil.  To see the evil Empire fall.  We like seeing Nazis lose, even if it's space Nazis.

Plus, the story, the world is so big, there is room for all kinds of storytelling, witnessed recently by the success of the Mandalorian.  Since we've viewed a lot of Akira Kurosawa, we can see his influences on Star Wars.  The touches from Hidden Fortress, from Yojimbo.  We talked about how we now want to see Seven Samurai in Star Wars or what Throne of Blood looks like.  What Casablanca looks like in Star Wars.  A more James Bond inspired Agent of the Empire.  You can tell almost any war story, any samurai story, any western in the world Lucas created.

If you are looking for ways to celebrate, for the best content, may I suggest the Original Trilogy, the Clone Wars television show (particularly the later seasons), The Mandalorian, The Book of Boba Fett, and Rogue One and Solo of the newer material.

Or just dive in fully and embrace the weird parts, like Caravan of Courage or Ewoks: The Battle for Endor.  I mean, even the Star Wars Holiday Special has its moments.  Look it up on YouTube.

Enjoy the day.  Remember, there is hope, even when the world looks its darkest.  Look for good to win out in the end.

And of course, may the Force be with you, always.

Or, for my more orthodox Jedi,

May the Force be with you.
And also with you.