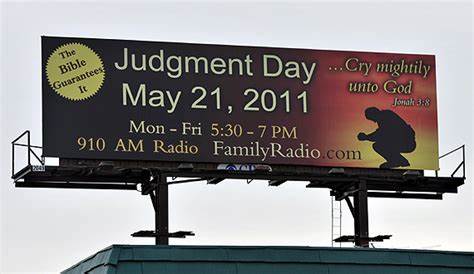 In preparing blogs, I sometimes check to see what holidays may be celebrated on the day.  Sometimes, it reminds me of important holidays to other cultures and faiths.  Sometimes, it introduces me to a niche holiday that sounds particularly interesting.

Today, it brought up an interesting day - Rapture Party Day.  The day was created to memorialize Harold Camping, the president of Family Radio, making the prediction that the rapture would occur on May 21, 2011.  Camping's followers began preparing for the impending rapture, selling off their possessions, and some quitting their jobs and spending their time trying to save souls. A retired subway worker spent $140,000 on billboards that told of the rapture.

Of course, the rapture did not happen. After this prediction did not come true, Camping changed his story to say the rapture, as well as the destruction of earth, would then take place on October 21. On October 16, he admitted he didn't know when the end would come, and he didn't comment after October 21 passed. In March 2012, he said he had been "humbly mistaken."  This wasn't the first time he had made such a prediction either; Camping had made a similar prediction back in 1994.

Why is it that so many Christians spend so much time worrying about or rushing the world to end, instead of doing the work God has called us to here?  Why are we so obsessed with figuring out the time when the rapture will occur, when God himself has said none will know the hour?

Below is an updated prior post on the rapture and my thoughts on how we should view it as followers of Christ.

"Then we which are alive and remain shall be caught up together with them in the clouds, to meet the Lord in the air; and so shall we ever be with the Lord."

The rapture of the church is one of the most debated concepts in any discussion of Revelation.  While there is no specific chapter or verse that specifically mention a rapture, there are a handful of verses that can lead to the interpretation of a time where believers are "caught up" or raptured in the air.  The general accepted idea of the rapture is that there will be a time in the future where the trumpet will sound and all believers, both living and dead, will be called up in the air to meet with Christ, thus physically uniting Christ and the Church and removing the Church from the world.

The main question regarding the rapture is usually one of timing. When exactly does the rapture occur with regard to the other events of the Revelation?  One of the most widely held beliefs is in a pre-tribulation, pre-millennial rapture. This means that the rapture would occur at the beginning of a seven year period of great turmoil called the tribulation, followed by the millennial rule of Christ, all before the ultimate final judgment.  First proposed and popularized by John Nelson Darby in 1827, this is the view of most Evangelicals.  This particular view has been further popularized by the Left Behind series, as it is the main view of the rapture where the events of Revelation start with a great disappearance of all the believers.

There is one verse in chapter four which can lend to this interpretation of the rapture.  "After this I looked, and there before me was a door standing open in heaven.  And the voice I had first heard speaking to me like a trumpet said, 'Come up here, and I will show you what must take place after this.'"  In this passage, John seems to be referring to a separate event from the initial vision in chapter one.  In chapter one, John heard the voice like a trumpet, turned around and started seeing the visions of Jesus and the seven churches and seven spirits.  Here John hears the voice again, the sound of a trumpet calling him up to heaven.  This interpretation goes that this sound of a trumpet is the one that will call up the believers to heaven prior the the events of the tribulation unfolding ("what must take place after this").

There are many other interpretations of when and whether the rapture will occur.  Ultimately, it is a mystery and a non-essential for a believer.  There is room for disagreement and lively discussion among believers, because there are only passing references to it in scripture.  At the end of the day, when the rapture occurs is the least interesting question about the rapture.

The more interesting question, the more cutting question about the rapture is the one that is most often unaddressed.  At our prior church, there was a motto for our study on Revelation.  "Don't be mesmerized by Jesus' second coming if you're not going to tell people about His first coming."  The question relating to the rapture is similar.  The pastor discussed how after the rapture of the church, the world would see what happens when the influence of the church and the Spirit of God are removed.

I agree that the world will be dark indeed when the influence of the Spirit of God is removed, but I wonder about the church.

If your church disappeared today, would the community even notice?  Would anyone other than the members notice if your church just stopping meeting tomorrow?  Would the influence of the church be missed?

Even worse, has the church been such a damaging presence that the community would be better off without it?  Has the church hurt so many people that it has done more harm than good?

These are the tough questions.  It is wonderful to know where you stand on when and if the rapture will occur as described.  To be prepared for that future day.

But it's more important to be a beneficial influence on your community.  To be the salt and light to the world around you.   That's where a lot of conservative churches have often fell down.  You know the types.  Those that believe Jesus is coming back so soon, they've stopped all other work and are just waiting for it to happen.  Praying "come soon and save us from this wicked world."  The hunker down, doomsday preppers.

{  Side note - This brings up to me a curious thought about doomsday preppers that I have - many preppers are religious and believe in a rapture, but still prepare for the coming apocalypse as if they would be present.  Are they all mid or post trib?  Do they not fully trust that they would be raptured?  }

To do that, we can't just be waiting for it to end.

Don't wait so expectantly for a rapture that you miss being a servant today.