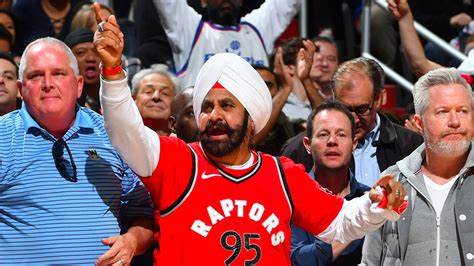 They also included a first, a former car salesman that has never played in, coached, or broadcasted a single NBA game, inducted as the first fan inducted into the hall's new superfan gallery.

His name is Nav Bhatia, and his story is incredible.

With political turmoil making life in India unsafe, Bhatia fled his home country, immigrating to Canada.  Despite having a degree in mechanical engineering, he struggled to find work because of his "long beard & turban."  After a great deal and months of searching with no luck, Bhatia finally accepted a job as a car salesman in the rough part of town.  Though severely overqualified, his mission was simple: "To prove hard work trumps hate."

Through a combination of hard work, a friendly personality, and some catchy radio ads, Bhatia became the best car salesman in Canada.  To put it in perspective, he sold 127 cars in his first 90 days on the job, a record that still stands today.

From there, he was recruited to become the general manager of a larger dealership across town.  This business was close to bankruptcy, and the current owner felt Bhatia might help turn it around.  When he arrived, all but one of his employees quit.  They refused to work for him,

Faced with this opposition, Bhatia did what he always does - he got to work, even harder.  He hired an entirely new staff and started to transform the business.  Within a few years, the near-bankrupt dealership was now one of the largest in all of Canada.  Bhatia ended up buying the dealership, along with the original one that hired him in 1984.

After spending a decade working for, purchasing, and building up two car dealerships in Toronto, he was now a self-made millionaire, giving him the financial flexibility to pursue his other passion, basketball.  Which brought in his connection with the Toronto Raptors.

When the Toronto Raptors were named the NBA's 28th franchise through league expansion in 1995, Bhatia purchased season tickets.  Even though the team was terrible at the time, Bhatia showed up at every game.  He was the loudest guy in the arena, cheering from start to finish.

In 1998, after years of loyalty and dedication to the struggling franchise, General Manager Isiah Thomas took notice and bestowed on Bhatia a new title, "Superfan."  Bhatia has remained a superfan of the Raptors, through their thirteen losing seasons, multiple blizzards, and even blackouts.  Bhatia hasn't missed a single home game.  He never leaves early and he's still the loudest guy in the arena, even as he nears 70 this year.

After the Raptors won their first NBA title in 2018, Bhatia became the only fan in NBA history to receive an official championship ring.  He's now the first fan to be inducted in that hall of fame.  After being inducted, Bhatia remarked, "I made a promise as a kid to my mom I would never remove my turban.  Today it is in the Hall of Fame.  Embrace what makes you different.  It is your superpower.  This is the crown I wear each day.  Thank you, mom."

The best part, and what truly makes Bhatia a superfan - he spends $300,000 annually to send thousands of kids to Raptors games.  He intentionally makes people from different backgrounds - black, white, brown, rich, poor, Christian, Muslim - sit next to each other.  He is using his favorite pastime to bring people together.  To bring communities closer together.

That is one super-fan.

Credit to Joe Pampliano (@JoePampliano) on Twitter for sharing this story.