Stan Lee passed away today at the age of 95.

I knew this day was coming and was still not ready for it.  It's been a hard year for comic fans, losing many legendary creators.  Steve Ditko, Marie Severin, Harlan Ellison, Norm Breyfogle.  But this one hits the hardest.

Stan truly was the Man.  An American comic-book writer, editor, film executive produced, actor, and publisher.  He was the first editor-in-chief of Marvel Comics and has been its publisher, chairman, and chairman emeritus.  Of late, he has been known for his cameo appearances in the Marvel Studios films.  It was great to see how he appreciated his creations being brought to life on screen.

While Stan may have gotten more than his share of the credit of the creation of Marvel characters over time by virtue of his visual presence, his contributions to the art form are unparalleled.  Stan brought character to comic books.  He brought real struggles and emotion to comic creations, grounding the Marvel Universe in 1960s New York.  And though it was Spider-man's motto, you could see the mantra "with great power there must always be great responsibility" throughout his work.

More than anything else, Stan was always comics greatest advocate and cheerleader.  A born showman with a bit of P.T. Barnum huckster, Stan knew how to evangelize his art form.  Always the optimist, he was simply a great personality.

I had the pleasure of getting a signature and a picture with the legend a few years ago.  I remember thinking at the time how frail he looked, but he just kept bopping along, smiling and going through the thousands of signatures and photographs that day. 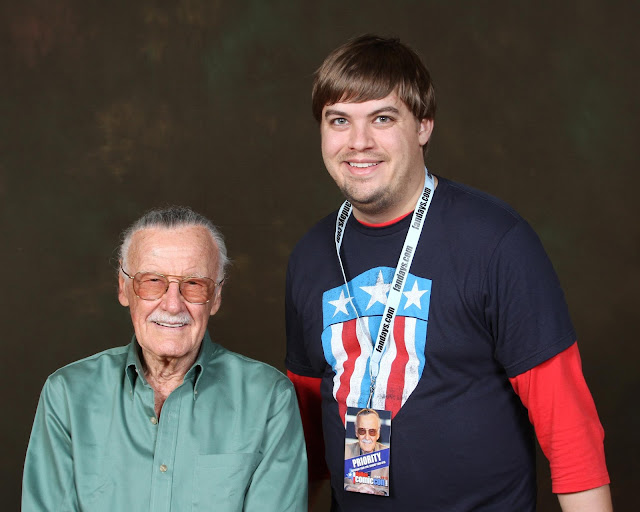 Stan always used the word Excelsior! to sign off.  He took it from Arthurian legend, stating it meant "onward and upward to greater glory."

Rest in Peace Stan.  Excelsior!
Posted by Mitch at 1:18 PM