Saw an image/post today that I felt the need to comment on.

The post was pointing out that there were 99 days left to the release of the remake of The Lion King this year and was getting people ready for the premier sing-along by diving out sections of the theater by vocal range.

The post then included a P.S. for "people who still decide to bring your kids to an obvious adult film. [?!?] ...YOU CAN'T SIT WITH US!" and puts the parents with kids in the first few rows. 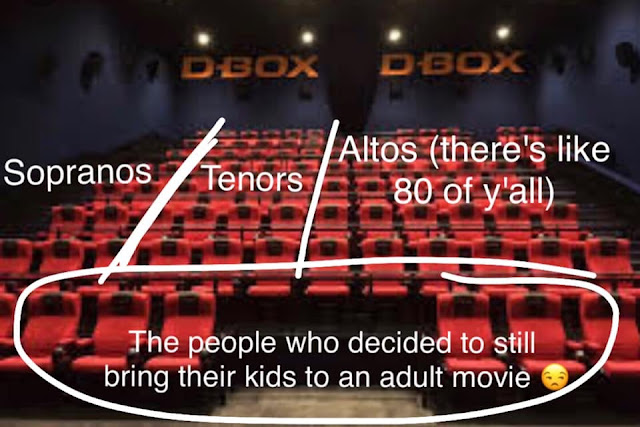 Excuse me if I cannot take this level of entitlement seriously.

Look, I know it's supposed to be semi-joking, but there's a kernel behind this that is not.  That is very serious.

I'm the first one to praise Disney movies when they are of their best quality.  And I'm also the first to extol the virtues of animation.  To remind everyone that it's a medium, not a genre, and that there are many levels of stories that can be told via animation.

I can also understand not wanting kids to be in a truly adult movie.  The ratings are there for a reason and it's troubling to see a toddler in a movie like Us, for instance (as Jamie and I saw at an evening show of that R-rated movie).

But to call this new Lion King an adult movie - you've got to be kidding.

It is what Disney movies have always striven to be, family movies.  Four quadrant movies.  All-ages.  Kid-friendly, etc.  And that necessarily means they are intending for families and children of all ages, 2 to 92, to be in the theater.

This isn't the first time this type of argument has come up.  It's happened with Finding Dory and with The Incredibles 2.  It's likely going to raise its ugly head with Toy Story 4, as it did with Toy Story 3.  There are these groups of now adults (in age at least, if not maturity) that argue that "I've waited soooo long for this film, I don't want my experience ruined by kids in the theater."  This post today probably wouldn't have bothered me as much, if it hadn't been part of a pattern with these sequels and remakes.

If you're that much of a misanthrope, do us a favor and stay home and watch it on your home theater.  Or plan to go to a mid-night release or a 9:00 pm showing.  Or go to a theater with an age restriction.

Because, here's the thing.  They forget the age they were introduced to these films.  They forget the magic that amazed them to this day, from seeing it at such an early and impactful moment.  And their current attitude would deny the current generation this same opportunity.  Especially on a movie that is essentially an exact remake.

Disney is not putting these movies out to appeal to your nostalgia.  They are releasing these films, remakes especially, to appeal to the newer, younger generations.  They want kids to see these films, over and over again and to be captured by the magic.

I completely understand the challenges of watching a movie with young children in the theater.  I've got one that is generally completely enraptured in the film and one that's fifty-fifty.  We choose what movies they go see very carefully and we choose the times and locations we visit very carefully.  But I cannot deny, there is something magical watching the films through their eyes.  Case in point, the new Dumbo movie and seeing Jude try to blast as an elephant every time Dumbo came on.  Or getting really giddy with the circus scenes.

We're likely going to be there opening weekend for The Lion King.  Because the four year old already knows it and the two year old is going to sing along likely and loves the trailer.

And we'll be sitting near the back.

With the whole screen in view.
Posted by Mitch at 5:47 PM